Customs supervisor gets suspended sentences for theft of $43,600 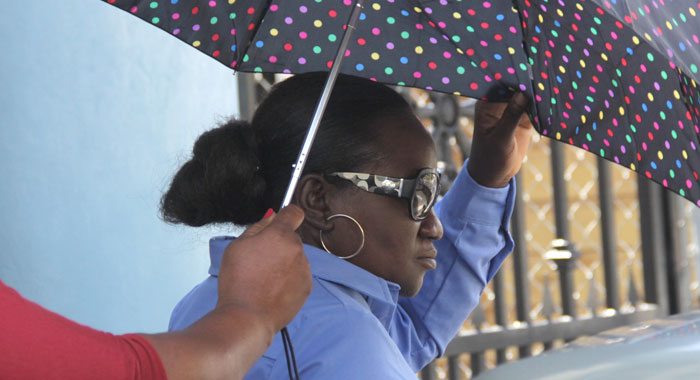 Julia Phillips uses and umbrella to try to hide herself as she leaves the Kingstown Magistrate’s Court on Wednesday. (iWN photo)

The Customs Supervisor in Bequia who was charged with the theft of EC$43,626.91, in cash, from the government and official corruption has been given two suspended six-month prison terms.

Magistrate Bertie Pompey handed down the sentences at the Kingstown Magistrate’s Court on Wednesday, after Julia Phillips pleaded guilty to the theft and corruption charges brought against her.

The sentences have both been suspended for one year, meaning that Phillips must avoid running afoul of the law for the next year, if she is to avoid going to jail.

She also pleaded guilty to a charge that between the same dates, also at Bequia, being employed in the Public Service and being charged with performance of any duty, by virtue of such employment, corruptly solicited, received or obtained property, to wit EC$43,626.91 in cash for herself on account of anything to be afterwards done or omitted to be done by her in the discharge of her duties of her office as Supervisor of Customs and Excise Department, Bequia branch.

According to the facts presented by Senior Prosecutor Adolphus Delplesche, about 10:30 a.m. on Sept. 24, 2018, the Comptroller of Customs and Excise Irwina Phills, received information of irregularities in relation to cash collected at the Customs Bequia Branch.

She dispatched the assistant comptroller, Terrence Horne, from Kingstown and instructed him to visit the Bequia branch to verify the information.

On arrival at the Bequia branch, he spoke with Phillips and asked her for the cashbook.

They perused the cash book and observed that for the period Sept. 1 to 24, 2018, cash collected was paid in days after it was collected as indicated by the receipt issued by the Bequia Revenue Office.

The cashbook showed records of cash collected for the period Aug. 15, 2018 to Sept. 24, 2018, but there were no receipts issued by the Bequia Revenue officer to prove that the cash was paid into the bank.

Horne questioned Phillips about the absence of receipts and cash.

She told him that she would help a friend anytime she collects foreign currency and that is what brought about the irregularities by her not paying in the cash on time.

She also told him that she would get sorted it by the end of the month.

Horne also spoke with the assistant supervisor, Genrick Sargeant and instructed him to assume the duties of checking off the cash collected on a daily basis and to ensure it is paid into the bank daily.

On Sept. 26, 2018 about 9 a.m., members of the Internal Audit Unit visited the Customs and Excise Bequia branch.

They conducted an audit of the record of that office, which revealed that cash collected for the period Aug. 15 to Sept. 26, 2018, was not deposited to the bank or paid directly to the Revenue Office and a total of EC$43,626.91 was missing or unaccounted for.

The matter was reported to the police and detective Corporal 563 Primus of the Major Crimes Unit commenced an investigation.

During that inquiry, Phillips was taken into custody on enquiries for theft.

While she was in custody, the pastor of the Port Elizabeth Evangelical Church, Camron Cato, of Bequia, brought the mentioned sum of cash to the station.

He handed over the money to Phillips and she handed it to Genrick Sargeant.

Primus took Phillip to the Criminal Investigation Department and electronically interviewed her in the presence of her lawyer, Grant Connell.

She stated that she took full responsibility for the missing cash and that it was already repaid.

Primus sought the advice of the DPP and charged Philips for theft and official corruption.

In mitigation, Connell cited two cases in St. Lucia, where the defendants, on indictment, were sentenced to community service or a period of imprisonment, in default, and ordered that the money be repaid.

He noted that in those cases, the court had imposed non-custodial sentences even before the money was repaid, and even as the maximum sentence in that neighbouring country is seven years, compared to two years in St. Vincent and the Grenadines.

In St. Vincent, he mentioned the case of Tamara Marks, who was fined EC$10,500 in 2015, after pleading guilty to a charge of theft of EC$21,925 and abuse of her authority as Registrar of the High Court.

The lawyer also pointed out that Phillips had already been fired from her job.

Phillips had initially pleaded not guilty when she was arraigned on Oct. 1, 2018 at the Serious Offences Court and was granted EC$50,000 bail.

Chief Magistrate Rechanne Browne recused herself from the case on Jan. 15, but gave no reasons for her decision.