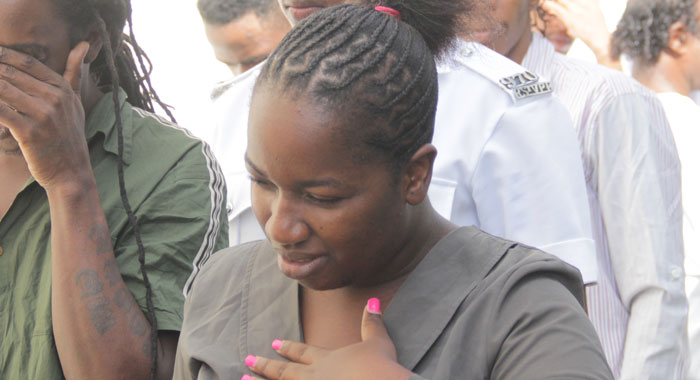 The Nigerian woman charged with using a 90-year-old businessman’s credit card without his permission and stealing EC$1,472.01 from him has been denied bail.

Chief Magistrate Browne, sitting at the Serious Offences Court, in Kingstown, on Wednesday denied bail on the grounds that Eunice Dowers, née , 25, is a flight risk.

Bail was denied as the prosecution said detectives were investigating a number of suspicious transactions on DaSilva’s credit card.

She said that while her lawyer, Jemalie John, had told the court that Dowers, who is married to a Vincentian, has been living in St. Vincent and the Grenadines for eight years, he had provided no proof of it.

Senior Prosecutor Adolphus Delplesche objected to the woman’s bail as the matter came up for the second time in as many weeks.

Dowers was arraigned last week Wednesday, Feb. 20, on charges that between Sept. 4 and 8, 2018 at Kingstown, with intent to defraud the First Caribbean International Bank, she was obtaining service by representing, without the consent of Bertille DaSilva, 90, of Indian Bay, that she was a holder of a credit card issued to him.

DaSilva is a manager of Star Garage, where Dowers worked until recently, when she was involved in a violent lunchtime office brawl with her co-worker, Marlon Stephenson.

In objecting to bail, Delplesche said that detectives were concerned that Dowers would abscond and interfere with the investigation.

He said that a number of transactions were made on Amazon.com, Inc. and Dowers still has access to that account.

He said that investigators are fearful that if released from custody, Dowers can access the Amazon site and interfere with their probe.

Delplesche said that investigators are working assiduously and are likely to bring more charges against Dowers in one week’s time.

He referred to a recent case in which detective Sergeant Biorn Duncan brought 94 deception charges against Tedroy McKree and said he wants to see if detective Corporal James, who is leading the current investigation would bring 100 charges.

Delplesche, returning to his serious tones, said that the investigation is continuing and “like Columbus”, the prosecution is asking for more time.

We are seeing seaweed and where there is weed, there is land,” he said.

In his response, counsel John told the court that his client is a resident of SVG and has been living in the country for eight years.

He said that for all intents and purposes, SVG is his client’s home and she has a fixed address in the country.

He said that his client has been cooperating with the police and some of the evidence gathered so far has been obtained with her assistance.

John said that while prosecutors say that more charges are likely to be brought against Dowers, the fact is that she is currently charged with stealing less than EC$1,300.

He said that the fact that more charges have not been brought means that the police do not have the evidence.

He said that his instructions are that his client has been cooperating with the police.

John said that the investigation is one in which his client cannot intervene.

He said that even if the transactions on her Amazon account are deleted, the bank still had the credit card records.

He said that if Parliament did not intend for foreigners to be given bail, they would have passed such a law.

Dowers is slated to return to court on May 23.