Man gets sudden Bajan accent as he begs not be jailed 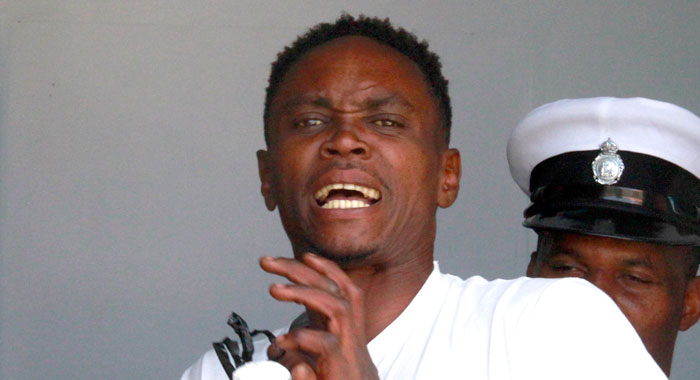 A Questelles man who pleaded guilty to drug possession on Tuesday seems to have taken Chief Magistrate Rechanne Browne by surprise when he suddenly began speaking in a Barbadian accent while begging not to be sent to jail.

“Wait– the Bajan breeze blowing here?” the magistrate said on suddenly hearing the neighbouring accent at the Serious Offences Court in Kingstown.

“Is always an accent in me,” responded the defendant, Winfield “Winterfresh” Sam, 33, who has lived in Barbados, and appeared to cry while asking not to be sent to jail.

On Tuesday, Sam pleaded guilty to a charge that on Feb. 8, 2019, in Kingstown, he had in his possession 1,135 grammes of cannabis with intent to supply.

The court heard that about 8:25 a.m. on Feb. 8, personnel from the Rapid Response Unit, headed by Corporal 296 Davis, were on mobile patrol duty around Kingstown.

Corporal 615 Williams and PC 863 Gonsalves were members of the party.

On reaching near the Coreas Wholesale Building on Lower Bay Street, they saw Sam walking from the direction of Ace Hardware to Rose Place.

He had a bag over his shoulder.

Sam replied, “Officer, me going home!” and continued to walk away

Gonsalves quickly exited the police vehicle and the defendant began running west, turning right onto Higginson Street and removed the bag from around his shoulder.

He made a left turn onto Lower Middle Street and continued running west.

Sam completely removed the bag from his shoulder and dropped it into the pan of a pickup truck parked along the side of the street.

He continued running west then turned onto the BRAGSA compound, at which point Gonsalves lost sight of him.

Gonsalves retrieved the bag and opened it in the presence of Williams.

The police took the bag to the Narcotics Base in Arnos Vale and found that the transparent plastic bags amounted to 25 in number. The bag also contained two black plastic bag.

The police continued their investigation and arrested Sam in Kingstown on Monday, Feb. 25 and took him to the Criminal Investigation Department there.

While there, he was cautioned and interviewed and told police:

“Officer, yuh go lock me up for that, man? Me ah behave meself. Me nah break no body place; me nah thief. Oh God, gi mi a chance nah. Ah my piece a ole weed me geh from Leeward.”

Sam pleaded guilty to the charge when he appeared in court.

He told the court that since being released from prison recently he has been unable to find a job.

“Is like how society ha’ me,” he said, adding that he decided to build a cart to sell onions and other items in Kingstown.

He said that he had just bought some items when the police intercepted him and he evaded them.

He told the court that Williams had told her colleagues to pursue him although he and she are friends and he had signalled to her that he had the drug on him.

“Me cyar believe she do me that,” Sam told the court, adding that the officer knows he has two children to take care of and no job.

He said the officer stopped the vehicle while returning from patrolling the leeward side and said,

The chief magistrate later rebuked the man for impugning the officer’s character and he apologised for his action.

He told the court that a friend had given him the marijuana to sell and he was going to use the money to buy onions and garlic to keep himself out of trouble.

He said that instead of giving him a chance, the officer “wilfully” told her junior to pursue him.

“Be merciful to me and help me because me ah stay out the reach ah trouble…” he told the court, adding that the police officers are acting “to keep the privilege of the government going on”.

He said he was willing to pay a fine, adding that he had $70 that he made from his sales on Monday.

He said that if given a chance, he will pay the money and stay away from marijuana “and all them thing they”.

Senior Prosecutor Adolphus Delplesche recommended that the man be made to pay a fine.

In handing down her sentence, the chief magistrate noted that the man had pleaded guilty at the first opportunity.

She, however, told him that his dramatic crying in court would do nothing to help him, adding that she knows when he leaves the court he would think he did well and would be grinning from ear to ear.

She told him that if it is that he is seeking to do something different, she is going to give him an opportunity to pay a fine.