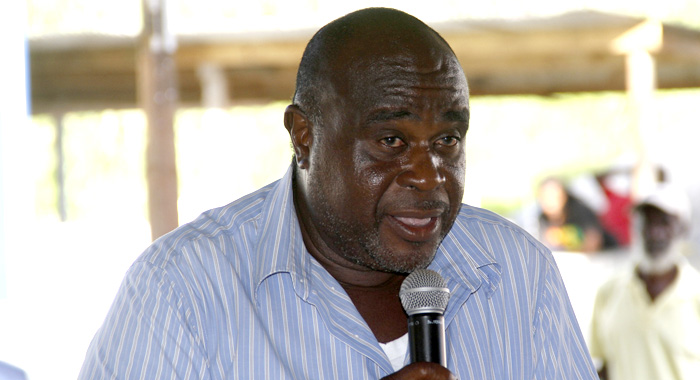 Samuel, 53, was arrested at Rabacca on Friday, where the state is surveying lands near Samuel’s property in the area.

The businessman, who has been in a decade-long battle with the government over mining on lands he owns in Rabacca, is accusing the government of attempting to relieve him of lands he legally owns.

The dispute may have arisen as a result of the principle of accretion, which could see the size of lands one owns increase or decrease depending on the shift of watercourse running through or near it.

The dispute also includes farmers using Samuel’s property as a thoroughfare to access farmlands north of the area.

Samuel recently placed a 40-foot container across the road at the border of his property after the gate that he re-erected was removed.

On Friday, he was arrested and charged with one count each of disrupting Alrick Williams of Cane Garden and Garnet James of Diamond, surveyors employed by the Government of St. Vincent and the Grenadines in the due execution of their duty while conducting a public survey.

Samuel was granted EC$1,500 bail at the Georgetown Police Station.

At a Feb. 20 press conference, Prime Minister Ralph Gonsalves was asked to comment on the on-going impasse at Rabacca.

“Mr. Samuel has property rights, the people in the community will have what you may call customary rights, where they have been traversing somewhere. The state will have lands bounded, the other people would have lands bounded and the state got involved in it with a mining issue because the professionals said that the manner in which Mr. Samuel – they advised that the manner in which Mr. Samuel was mining was not environmentally sound. That’s how the problem started.”

He was referring to the decision of his government in early 2011 to rescind Samuel’s licence to mine aggregate on the lands he owns at Rabacca.

Samuel has dismissed this decision as political victimisation for his support of the main opposition New Democratic party in the 2010 poll.

The prime minister said there is a survey to be done under the superintendence of the Chief Surveyor’s Office and the relevant notice has been issued, the attorney general has given advice on it, and Samuel, through his lawyer, has countered with something else.

“And these matters will come, in the normal course of things to their finality.”

Gonsalves said that the state administration had offered to have discussion with Samuel.

He, however, said that the businessman had said he wanted the prime minister to be at meeting.

Gonsalves said that the matter is a technical one to be dealt with by the relevant officials.

“But I understand that a matter which has emerged subsequently, they need to have a survey and that is what is being dealt with. But I am absolutely sure that the public officials are prepared to have dialogue with Mr. Samuel or his representatives. But, as to me, I don’t have to business to talk to Bigger Bigs about it.

The prime minister said that he believes in having things discussed and settled, but he doesn’t have to be involved in it.

“… What’s it going to do? Every citizen that has some issue with an arm of the state, that I must interpose myself into that? That’s not sensible organised governance.”

Gonsalves said that if the issues were “political” and “bogus”, Samuel has  “a battery of lawyers”, why doesn’t he go to court and have the court pronounce on it.