Ghost fishing — a nightmare in the ocean 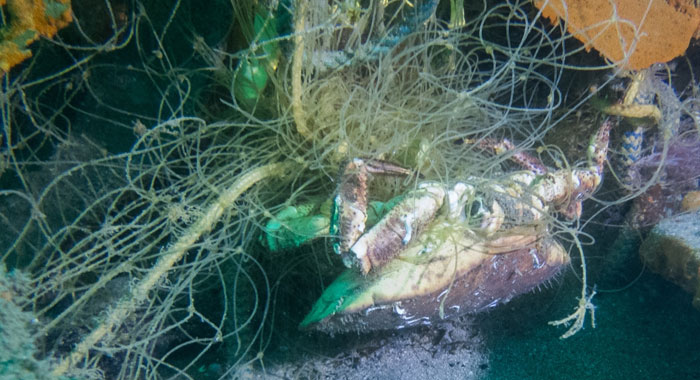 When we as humans hear the word “ghost”, the first thing that might come to our mind is the disembodied spirit of a dead person who haunts the living, or maybe a horror movie “House On Haunted Hill”. However, in the ocean there is a ghost that haunts and assassinates marine animals. This ghost is “ghost fishing”.

Ghost fishing is the accidental capture of aquatic organisms by fishing gears, for example, fishing nets, fishing lines, traps, and pots that has been lost or discarded into the sea, which continues to entangle or trap aquatic animals. Marine animals are already suffering from ghost fishing. According to the Food and Agriculture Organization (FAO) abandoned, lost or discarded fishing gears in the ocean makes up around 10 per cent (640,000 tonnes) of all marine litter.

Ghost fishing kills 650,000 animals a year. An Aug. 29, 2018 National Geographic article stated that more than 300 olive ridley sea turtles died in Mexico after becoming entangled in a fishing net. In January 2019, a huge ghost fishing net estimated to be more than 100 feet long washed up on a beach in Cornwall. Luckily, dozens of crabs and lobsters were rescued.

Ten per cent of the world’s population depends on fisheries for livelihoods, and 4.3 billion people are reliant on fish for 15 per cent of their animal protein. Climate change is already causing coral bleaching and ocean acidification. Eight million tonnes of plastics are already in the ocean, killing marine animals. It is estimated that by 2050 there would be more plastic than fish in the ocean if nothing is done urgently. Eutrophication is causing an outbreak of algae, depleting the oxygen in streams and the ocean. Ghost fishing is causing entanglement. How many more nightmares can these marine animals take?

Here are some solutions for ghost fishing:

The greatest rapper of all time, Tupac Shakur, has a song named “Changes”. The song begins with “I see no changes”. Can we make some changes to protect and conserve the ocean to help feed the world’s population, to sustain livelihoods, and to protect these animals from going extinct?

One reply on “Ghost fishing — a nightmare in the ocean”