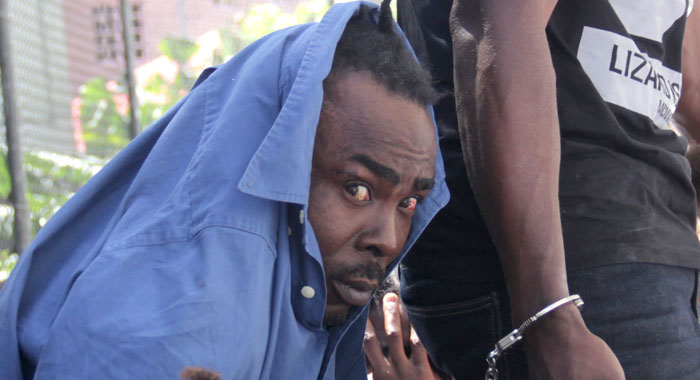 Michael Thomas was ordered to pay the fine forthwith or go to jail. (iWN photo)

Chief Magistrate Rechanne Browne, on Friday, described as irresponsible, a man who said he was selling cocaine to help take care of his 1-week-old baby.

Last Friday, Michael Thomas, 43, of Rose Place and Victoria Village, pleaded guilty at the Serious Offences Court to charges that on Feb. 28, at Rose Place, he had in his possession 3 grammes of cocaine, and 17 grammes of cannabis with intent to supply.

He also pleaded guilty to a charge that he resisted the arrest of PC 98 Bailey on Feb. 28, at Rose Place.
The court heard that members of the Rapid Response Unit were on mobile patrol duties when, acting on information, they went to Rose Place near Bikers’ bar.

Bailey said Thomas was sitting on a bench.

As the police vehicle approached, the police officer saw Thomas throw what appeared to be a plant-like material from a white wrapping paper.

The police officer signalled the police vehicle to stop and informed Thomas of his observation.

Thomas consented to a search and the police found in his pocket a Ziploc bag containing plant like material resembling cannabis.

When cautioned, Thomas said, “Officer, is for me to smoke.”

Bailey then escorted Thomas to the nearby mas’ tent building and requested a complete search of the defendant’s body, to which the defendant consented.

As Thomas was pulling down his pants, a black plastic bag fell from his boxer shorts.

Thomas quickly picked up the bag and attempted to put it in his mouth.

The police were able to subdue Thomas and relieve him of the plastic bag, which was found to contain 24 foil wrappings.

The police officer opened the foil wrappings and found them to contain a whitish substance resembling cocaine.

He was arrested and charged.

When asked what he had to say for himself, Thomas told the court that he had a one week-old baby and he was trying to help himself and his child.

He asked for time to pay a fine.

However, the chief magistrate asked the man if he was trying to help himself and his baby at the expense of destroying other people.

She told him that the child could accidentally access the cocaine and this can have  a severe effect if it should enter the child’s body.

“You are not a responsible parent at all,” the chief magistrate told the man.

She told him that her court has no tolerance for cocaine, which is a very serious and dangerous substance, though the quantity for which he was charged was small.

She ordered him to pay EC$600 forthwith for the cocaine or go to jail for three months and EC$150 for the cannabis or one month in prison.

For the resisting arrest charge, Thomas was fined EC$300 to be paid forthwith or one month in prison.

The man had not paid the fine by the time the court adjourned for the day and he was escorted to prison.

4 replies on “Man sells cocaine to take care of newborn”