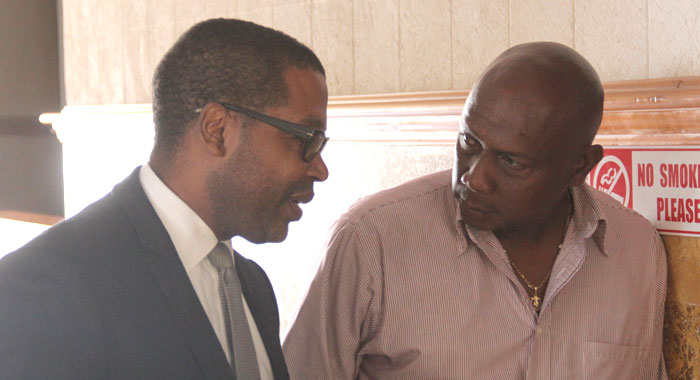 The petitioners, Ben Exeter, left, and Lauron “Sharer” Baptiste in conversation during the trial in March. (iWN photo)

Lead lawyer for the petitioners in the Central Leeward election petitions case, Queen’s Counsel Stanley “Stalky” John on summarising his client’s case, told the court that there were breaches of the election law that went to the heart of the outcome of the vote.

He said that those breaches cannot be cured by section 60 of the Representation of the People Act, which says, an election should not be invalidated because of mistakes or non compliance that do not affect the result.

John also asked the court to declare the election void because of defective ballots and failure by the respondents to provide a paper trail in the form of statements of the polls. He further said that the election should be overturned because of the failure of the first respondent, Winston Gaymes, the returning officer for Central Leeward, to defend himself against the allegations.

“It is petitioner’s case that those principles, or at least some of those principles were, in fact, infringed — the election was not conducted in compliance with them,” John said as he made closing submissions at the NIS Conference Room in Kingstown, which has been declared a court for the trial.

“The petitioner asserts further that not only was the election, as a result, not conducted substantially in accordance with the principles laid down in the RPA, but that the results of the elections have been affected.”

The NDP has also brought a petition challenging the result in North Windward, where the ULP was also declared winner in the elections, the final results of which was 8-7.

The consolidated case is now coming to trial after years of legal wrangling that saw Justice Brian Cottle dismissing it as improperly filed only to have that decision overturned by the Court of Appeal, which said the judge displayed apparent bias in his ruling.

John told the court that his client had alleged many breaches of the election law and many issues of fact arising.

“… but the petitioner submits that the pivotal allegation of this petition concerns two sets of issues fundamentally,” he said.

The lawyer said that the first set of issues arise from “the defective ballots”.

The two key issues arising out of the complaint made about ballots that were counted are the absence of the official mark on significant numbers of those ballots and the unavoidable breach of the secrecy of the vote based on the observations made as regards the condition of the ballots.

John said that the “mutilation of the ballots is an aspect of the defect”, adding that   ballots with the official mark placed in the wrong place were void and should not have been counted.

“It is for the court now to determine whether or not the counting of those ballots was, or amounted to, a breach as alleged by the petitioner and to the extent that the court finds that that was the case, then the court, the petitioner submits, must conclude that one of the fundamental principles that are laid down by the RPA would not have been complied with and that the ballots when they are extracted, would have affected the results of the elections.”

He said that there is no evidence before the court that Exeter agreed to accept those ballots at the final count.

No ‘paper trail’; no Gaymes

He argued that the second fundamental element from which issues flow is the failure by the respondents to provide a paper trail to consistently and accurately verify the authenticity and accuracy of the results of the election.

This included the issues pertaining to the Form 16 — statement of the poll — and the alleged inconsistencies and inaccuracies as regards the information on those Form 16 documents.

He said that this demonstrates that the count that is purportedly given by the respondents is unreliable.

The lawyer further pointed out that in polling station CL1, there is still no authentic account of the statement of the poll.

The third main prong is the failure of the first respondent to defend.

“It is the petitioners’ respectful submission that to the extent that his case is made out based on the evidence before your lordship in relation to those three or any of those three, certainly any of the first two, then that would reflect that the election was not conducted in accordance with principles laid down by the RPA.”

He said that the basis on which a court could void an election is because of an undue election or an undue return.

“The bases on which the petitioner is asking the court to come to that conclusion are the breaches of the law and regulation, and, in some instances, my lord, the breaches of a provision of our Constitution – Section 27. And we are mindful of the curative provision in section 60 of the RPA.

The petitioners have argued that on instances where the ballots contained the official marks and initials of the presiding officer, they were placed in such a way as to result in “unavoidable breach of secrecy” of the vote.

John said that the respondents offered no evidence to contradict this, adding that presiding officers Kathleen Jeffers and Wallace Christopher, the two witnesses on behalf of the respondents, did not address this in their witness statements.

“There is the photograph of the ballots themselves. They did not contradict those and say those photographs do not reflect the ballots that were counted on that day. No presiding officer, m’lud, bothered to either tender a witness statement or attend the trial to give oral testimony to clarify for the court that, in fact, this was not the case.”

John told the court that what was more is that in the process of cross examination, none of the witnesses for the petitioners were challenged in relation to whether or not “the perception they had, the concrete depictions of the ballots themselves, what they said they saw, as supported by those depictions, was in fact not the case.

“All of this evidence is absolutely unchallenged, m’lud.”

He said that from concrete facts, the photos of the ballots that are depicted, the court is entitled to draw inferences.

“But once it passes muster of evidence, your lordship will see that by virtue of the fact that the respondent, the principal party in this matter, who was responsible for the conduct of the election in Central Leeward, the first respondent, Mr. Gaymes, has not shown up, there was a witness summary that was filed in these proceedings, purportedly signalling the evidence that he would give,” John said.

A ruling is expected on March 21.