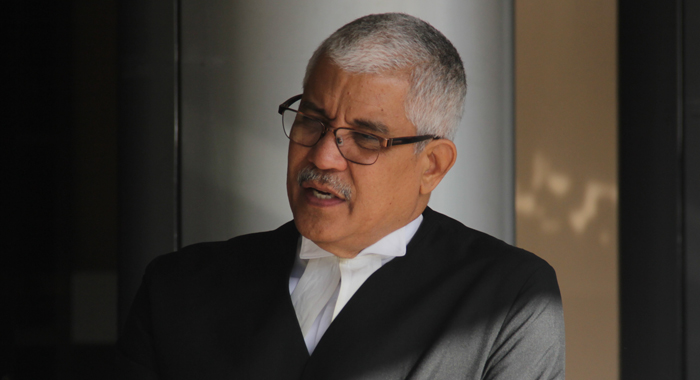 The lead lawyers for the government in the election petitions case has urged the court to reject the argument that in deciding whether to overturn the result in Central Leeward, the number of defective ballots should be deducted from the margin of victory.

However, if the petitioner’s argument is accepted, the number of defective ballots will exceed that margin.

The respondents have invited the court to take the approach of deducting the defective ballots for each of the candidates, accordingly.

If this is done, Straker’s election would still stand.

Senior Counsel Douglas Mendes made the point on Wednesday as he delivered closing submissions in the trial of the two petitions.

The main opposition New Democratic Party (NDP) has brought the petitions, challenging the results of the Dec. 9, 2015 general elections, which electoral officials say the ULP won by an 8-7 margin.

Mendes also urged the court to reject the argument that it was not possible to verify the official marks in Central Leeward without violating the secrecy of the ballots.

The design of the ballots used in that constituency has become a central point of the petition as the space for the initials and official mark of the presiding officer was on the counterfoil, rather than on the ballot.

The petitioner, the NDP’s Benjamin “Ben” Exeter, has argued that in the instances where the presiding officer placed the authenticating marks on the ballot — where no specific space was provided for them – the election officials had to violate the secrecy of the ballot in order to verify the authenticity of the ballot returned by the voter.

But Mendes told the court on Wednesday that in order to prove such violation, the petitioners would have to prove that the presiding officers folded the ballots right up to the mark that say “do not fold beyond this line”.

He maintained that the petitioner has not presented any evidence that this was the case.

Mendes told the court that the premise of the petitioner’s case was that all ballots in polling station CLF and 99 CLF1 did not have the initials and stamp on the ballot themselves but on the counterfoils.

The court, he said, has to resolve the issue of fact of whether the ballots in CLB had initials and stamp on the counterfoils.

The lawyer told the court that the petitioner had pleaded that 90 per cent of the ballots had the initials and stamp below the line and that the secrecy of all of those ballots was infringed.

Mendes, however, argued that the petitions cannot ground their case on a premise without proving the premise.

“More than that, it is not evidence to support my learned friend’s grandiose theory that in every one of the 90 per cent of the case, the presiding officer folded up to the line so that you could only see the initial and the stamp by pulling it back, and therefore, his case collapses on this point for lack of evidence,” he further said in response to the submission by Queen’s Counsel Stanley “Stalky” John, who is Exeter’s lead lawyer.

“My lord, I must confess that the way the pleading and the way the evidence was presented was very, very clever. If you didn’t pay attention to exactly what was being said, and more particularly, what was not being said, you might come away with the impression that there is some evidence there, but there is none.”

John is asking the court to overturn the election results on the grounds of defective ballots, unavoidable breach of the secrecy of the ballot, failure of the returning officer, Winston Gaymes to respond to allegations against him, and the absence of important election documents.

“What is the consequence of that?” Mendes said, adding that the result is a breach of section 54 of the election law.

“What is the consequence of that for an election? … You do not invalidate an election on that basis. The remedy is you prosecute the persons who invaded the privacy of the ballot.

“That is the only evidence. But has it affected the results of the election?”

Mendes said that no one has been disenfranchised.

“… the point about it is there is no evidence of breach of secrecy in relation to those cases, but, I repeat, if there was, you don’t invalidate an election…” he told the court.