Governance there for the grabs — Leacock, Patel 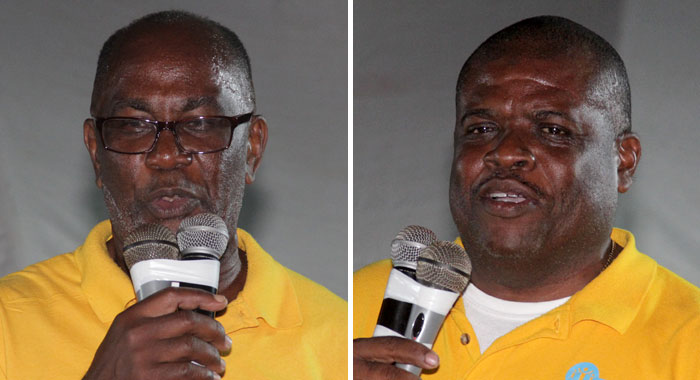 The two vice-presidents of the main opposition New Democratic Party (NDP) says that the party must do what is necessary to convince the electorate that it is ready for government in St. Vincent and the Grenadines.

Member of Parliament for Central Kingstown, Major St. Clair Leacock, told the party rally in Layou on Saturday that governance is there for grabs and its candidate must be prepared to put in the work or get out of the race.

Roland “Patel” Mathews, who is into his second term as Member of Parliament for North Leeward, speaking after Leacock, echoed this sentiment, noting that he came to politics since he was a university student and has been in opposition for almost two decades.

Leacock restated a point that he has made several times since being elected in 2015 for second term, telling party supporters that this is the last time he will be in opposition in the Parliament.

Leacock said that from the ULP side, “the people are fairly determined that they have had enough of that political party”.

And, from the NDP side, “they are clear that they are ready for a new government in St. Vincent and the Grenadines,” he told the rally, which was called at the end of the trial in the two election petitions the party has filed, challenging the outcome of the vote in Central Leeward and North Windward.

“So, it is there for the grabs. And it is for us in the New Democratic Party, as indeed we are, to present ourselves to you not just as the government in waiting, but as the party that can’t wait to be in government,” Leacock told party supporters and media audiences.

“If you know me and you know me well, I am restraining myself, because I don’t want to say certain things,” he said as some members of the crowd shouted, “Let it out!”

He said that this means that whenever the election is called he is “giving it my all”.

“It means that we have over 35,000 people who are waiting for us to do the work that has to be done to ensure elections,” Leacock said, adding that he is a serious man when it comes to politics.

“And we have to run on all 15 pistons in the New Democratic Party to seek government for our people of St. Vincent and the Grenadines,” he said.

“Our people have suffered too much and I ain’t speaking halfway. We deserve it, we are working hard for it, our people want it and we must deliver it.”

Leacock suggested that thing will change once the NDP comes to office.

“I’m under no doubt that with a New Democratic Party government, life will be better in St. Vincent and the Grenadines. Like that. Easy, easy like a Sunday morning. Easy, easy like that. That’s the confidence that your Major has in himself and in the president and in the leadership of the New Democratic Party. We will start government from the bottom up and we will deliver a better St. Vincent and the Grenadines.

‘This is our time’

Meanwhile, Matthews told the rally that the only way to ensure that the Unity Labour party does not “show its ugly head again, is to come out in your numbers and overwhelmingly vote for the New Democratic Party”.

He urged persons to ensure that the young people in their homes are registered to vote and to check that their ID cards are not expired.

“We have to do these things in order to counteract all that is happening. This is our time, people this is the time of the New Democratic Party to control government, in St. Vincent and the Grenadines,” said Matthews, who was returned to office in 2015 by a 12-vote margin.

“We have to ensure that your people are given the best living standard possible. Only the new democratic party can give that to you.”

19 years in the wilderness

Matthews said that his party is ready for government and this is last time in opposition.

He also asked Member of Parliament for the Southern Grenadines, Terrance Ollivierre to stand with him.

“This gentleman and I, we have the unique advantage. We were at university in Trinidad and Tobago when we were called to serve the people. We know the risks involved but we put our country first and we come forward,” Matthews aid.

In 2001, Matthews and Ollivierre returned home to contest the election for the NDP. Ollivierre was elected but Matthews would not win his seat until almost a decade later, in 2010.

He told the rally:

“For 19 years we are in the wilderness because we want to make things better, and I am telling you, I want to repeat, I want to reiterate what my brother, Major said, tonight, this is our last time in opposition. We are ready for government. But in order for us to do so, we must have the support of the people. You are critical to the New Democratic Party effecting the change that is necessary. “

6 replies on “Governance there for the grabs — Leacock, Patel”