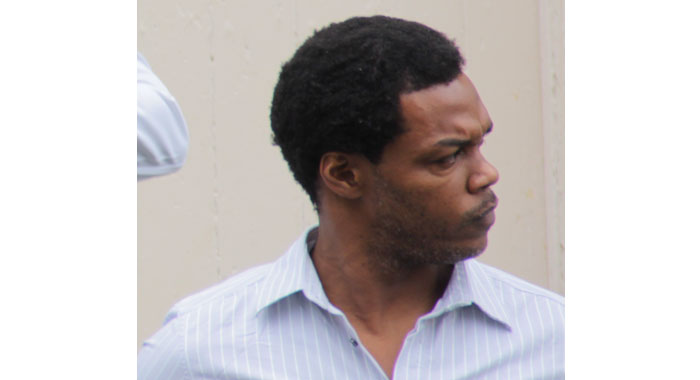 Allan Wilson is escorted to prison on Friday. (iWN photo)

Allan Wilson, the man who showed a C.K. Greaves employee a gun and told him “Soldier, pass dat” before relieving him of EC$42,000 in cash and cheques in Kingstown on Feb. 7, 2014 will spend 22 years in jail for his crime.

Justice Bryan Cottle handed down the sentence on Friday at the High Court in Kingstown.

It was the second time that Wilson was being jailed for armed robbery, the first being for his June 2003 robbery of a minibus conductor after placing a gun to the man’s head.

In the current case, Wilson was found guilty of a charge that on Feb. 7. 2014, at Kingstown,  he robbed, at gun point, Vendcliff Primus, a delivery clerk of Belair, of one black laptop bag, valued EC$60, containing one black notebook, valued EC$25, a sum of cash amounting to EC$29,000 and cheques approximating EC$13,000, the property of C.K. Greaves and Co. Ltd..

Acting Director of Public Prosecution, Sejilla McDowall appeared for the Crown and Wilson was unrepresented.

In mitigation, Wilson, made some rambling remarks, in which he, at times, seemed to be suggesting that he should receive a harsh sentence for his crime.

“So if you can please consider the benchmark and the consequence and the category of this sentencing. Other than the high impact, follow the guidelines that the Crown submit before you,” he told the court at the end of his mitigation, which he had also noted that the Crown had not pointed to any mitigating factor.

He asked High Court judge Justice Brian Cottle to consider that what the Crown is asking is extremely harsh.

“As a starting point for this offence, seeing, given the evidence before the court, there was no use of a weapon or force at all. Also, my lord, the evidence from the investigating officer against me, state that he discovered a mastermind, showing that I played no leading role,” Wilson told the court.

“Also, my lord, the Crown has not indicated any mitigating factors on my behalf,” he said, and the judge pointed out that that was why he was being given a chance to speak.

Wilson then went on to say that the social inquiry was prepared and he asked the crown to consider some of the mitigating factors therein, such as “the period of time since my last conviction, my character, my immediate family, my lord, my two young sons, my lord.

“Also, I would like you to consider the excessive charge of robbery brought against me being armed with a firearm. When given the evidence in court there was no such evidence clearly stated by the victim of even sighted a weapon or even being threatened,” Wilson said.

In pronouncing sentence, Justice Cottle noted that Wilson had been found guilty of robbery after a full trial.

The facts of the case are that on Feb. 7, 2014, Primus, an employee of CK Greaves was taking a bag continuing cash and other documents from the wholesale department to the supermarket, two doors away in Kingstown.

As he walked along the sidewalk, Wilson approached the employee and demanded the bag. When the employee hesitated, Wilson reached for his waist and there the employee could see the handle of a gun.

Wilson then pulled the bag away from the employee and ran off. The employee raised the alarm, spoke to a nearby taxi operator and a police officer.

The police officer gave chase and the fleeing Wilson fired a shot and made good his escape.

The police investigated and learnt that an employee of CK Greaves had given Wilson information about the movement of the cash.

Wilson referred to that person as the “mastermind”.

The information from that employee led the police to issue a wanted notice for Wilson, who was then brought to the police station by a lawyer.

Wilson was interviewed and admitted that he was part of the robbery.

He asked for permission to leave the station to retrieve the bag, telling police he did not expect it would still contain the cash stolen.

Police refused him permission to do so. They conducted an electronic interview with Wilson, in which he did not admit to being a part of the robbery.

The judge said he was reminding himself that what he is trying to achieve in the sentencing exercise is to balance the competing aims of retribution, deterrence, prevention, and rehabilitation.

He said that the court has draft guidelines for sentencing in robbery and they offer useful insight.

He noted that in St. Vincent and the Grenadines, robbery carries a maximum sentence, on conviction, of life imprisonment, which is the notional sentence of 30 years.

Justice Cottle said that to fix a starting point, the court must start by looking at the consequence of the robbery.

He said that in the extant case, a significant amount of cash was lost by the company and the employee, which was the direct victim, suffered, distress.

“When he was spoken to in terms of the impact of the offence on him, he revealed that it was psychologically and emotionally distressing.”

The judge said there was also a potential risk of injury to the public as a firearm was involved and during the escape, a shot was discharged.

“And it is for these reasons that I think that this robbery falls within the category of high.”

Regarding the seriousness of the offence, he said the robbery was sophisticated and a  well-planned assault by a group, in which a firearm was used to intimidate the employee and to deter the police pursuit.

“To my mind, that places it at level A,” he said, putting it at the top of the three-tier scale.

The judge noted that the Court of Appeal suggests a starting point of between 50 and 80 per cent of the notional 30-year sentence.

“In St. Vincent and the Grenadines, this type of offence, especially the involvement of firearms, is all too prevalent,” Justice Cottle said, adding that he would, therefore, begin at the starting point of 70 per cent of the maximum sentence, or 21 years.

He said that the aggravating features are many and include the fact that the weapon used was never recovered and may well feature in other criminal activity.

“That is a potentially lethal weapon. As pointed out, this was a premeditated and well-planned offence that took place on a public street in the capital city on a Friday afternoon.”

He said that the company suffered a significant loss.

He said that the perpetrator had a previous conviction for a robbery, in which a firearm was used.

“Indeed it was his case that the Court of Appeal used to offer sentencing principles for robbery.”

Wilson also has a conviction for burglary of a business place in Kingstown, in which articles worth over EC$27,000 were stolen.

He noted that Wilson also had convictions for firearm and ammunition possession of implement of burglar.

“To my mind, this shows that unlike what the prisoner suggests — he says he had learnt from his earlier period, he has not.”

The judge said he was content to move upwards from his starting point by two years.”

He said there was no one-third discount for a guilty plea.

He said Wilson had spent two months and 13 days on remand, which was deducted from the final sentence.

The sentence was 22 years and nine and a half months in prison.

“Mr Wilson, you now have the distinction of being the defendant whose sentences offered the court guidance for sentencing for robbery, twice,” the judge said.

Several other persons were implicated in the crime and three of them have been killed in separate incidents.