‘To say that I have vendors in my craw is maybe, putting it mildly’ — Francis 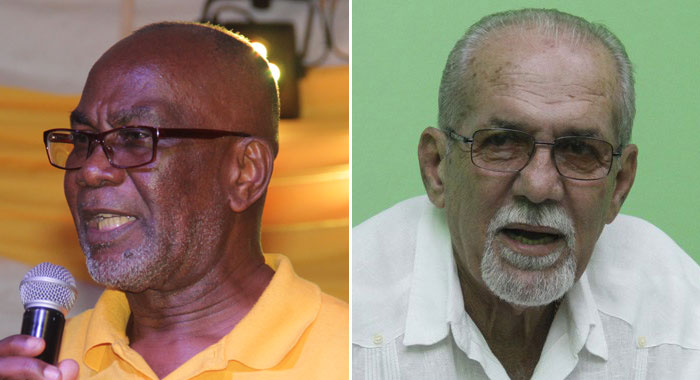 Minister of Transport and Works, Senator Julian Francis told Parliament last week that he has the vendors in Kingstown in his “craw”.

“I’ve had three flings at this, Mr. Speaker. I’ve made suggestions. I’ve entered projects. I’ve had massive discussions with the vendors of Kingstown and still it lies on my shoulder. To say that I have vendors in my craw is maybe, putting it mildly,” he said in response to a question from an opposition lawmaker.

He was responding to a question by St. Clair Leacock, Member of Parliament for Central Kingstown, which includes the city of Kingstown.

In asking the question, Leacock said:

“As I commit as MP for Central Kingstown to the clean-up of the city in the 40th year of our independence, would there be proper recognition and accommodation of my buy-in to exercise, such as (a) proper ablution facilities in the Heritage Square area and the toilet in Bay Street opposite Little Tokyo, (b) at least designs for a boardwalk along Little Tokyo to North River Road and to clean all that is now unsatisfactory and ugly with the seafront development, and (c) a phasing improvement in our sidewalks using different masonry or finishes over the existing cobblestones?”

The question was originally directed to Minister of Finance Camillo Gonsalves, who said it should have been directed to the Minister of Transport and Works, Sen. Julian Francis.

In response, Francis said that what struck him in the question was that it made absolutely no reference to vendors.

The works minister said that persons can hardly walk on the sidewalks in Kingstown.

“And that is a fundamental problem we have to face with.”

Francis said that in 2008, he had a consultation in Victoria Park, which Leacock, not then an elected member, attended.

“And I had, Mr. Speaker, I would say, at that time, the sway with the vendors in Kingstown and tried to implement the clean-up.”

He said that the Kingstown Town Board tried to start with the sidewalk under the then National Commercial Bank.

“And the Honourable Member for Central Kingstown told the vendors not to move. Personally went and did that, although he came to Victoria Park and attended the discussion and consultation I had with the vendors.”

“I am the son of a vendor,” Leacock said.

“I know you are the son of a vendor,” Francis replied.

“I am the product of vending,” Leacock further commented.

“So, I am saying in the clean-up of the city, I can’t pave the sidewalks, I can’t access the type of sidewalk to put in when you can’t even see the sidewalks,” Francis further said.

Leacock accused Francis of having “the vendors in your craw”.

“Mr. Speaker, you walk down the street and you have to walk off the sidewalk, in the roadway. Vehicles and pedestrians are competing for the road, the street in Kingstown, because the sidewalks are totally occupied.”

He went on to say that saying that he has the vendors in his craw is an understatement.

“I’ve proposed what to do, but when now an elected member wants us to buy-in on his ideas, I want him also to give the commitment that he will be involved in the discussion and make suggestions as to how we solve the vending situation in Kingstown.

“If I cannot get that commitment out of him, I will not be buying in [on] his ideas. And I am being very frank and blunt about it because the conversation cannot go on forever. There has to be a solution.”

Francis said he understands that a tourist was knocked down in Kingstown the previous week.

“And I am sure it is because the sidewalk is cluttered, he walked in the street,” he said.

The works minister said there is EC$420,000, as part from the 40th anniversary of independence celebration for the clean up of Heritage Square, which he said is an issue he has been “carrying year after year”.

“And it does not include ablution. It includes the cleaning up for that sum of the riverbed; to pave it and make it look better.”

Francis said there are two washrooms around Heritage Square, one owned by Soroptimist and the other by the government.

“All we have to do is manage them properly and have them open at the right hours,” he told lawmakers.

“And if we manage them properly, we might have to extend, but with the cleaning up of Heritage Square, there is $450,000 allocated… That money has to come soon because come the rainy season, yuh can’t pave the bottom of Heritage Square River, South River road.”

He said that the project for the relocation of the port to the western end of Kingstown extends from Little Tokyo to North River, eliminating the possibility of a boardwalk being built in that area.

In improving sidewalks, it has to be remembered that there is a tradition of cobblestone sidewalks and streets in Kingstown, Francis said.

Leacock, speaking from across the aisle, said, “I will be the representative for a long time.”

After Francis completed his answer, House Speaker Jomo Thomas asked Leacock if he had a supplementary question.

Leacock said: “Is the honourable minister willing, ready and available to visit my constituency office to discuss—”.

“That is not a supplementary question,” Thomas said.

Leacock said: “I have designs that would enhance and improve the vending process in the city in which we can have folded tables.”

Speaking at the New Democratic Party’s rally in Georgetown on Saturday, Leacock addressed the vending issue and Francis’ comments on it.

“Yellow Bird ah dem nah people pickney, too? I am the product of vending. When I was going Grammar School ah was coming down the road on Friday evening with tin tray to carry to … bakery on Middle Street to bake bread. And where horse reach, donkey go reach but this donkey like it aint wah reach — unless this one is a jackass,” he said, referring to a caricature of a donkey on his t-shirt.

One reply on “‘To say that I have vendors in my craw is maybe, putting it mildly’ — Francis”