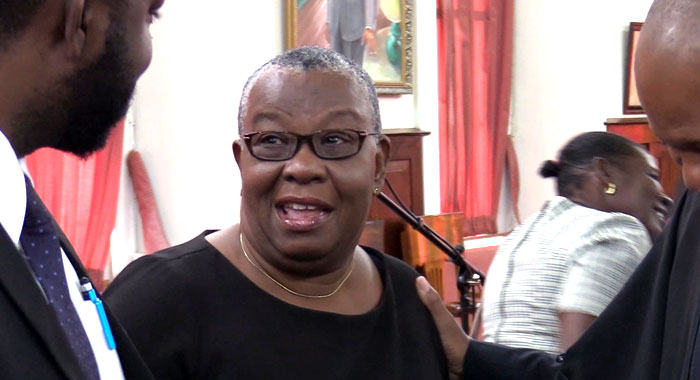 Former Supervisor of Elections, Sylvia Findlay-Scrubb chats with members of her legal team after the March 21 court ruling. (iWN photo)

“I just want, first of all, to say that this ruling, this judgement vindicated the then Supervisor of Elections. A wonderful woman, a woman stuffed with integrity,” Gonsalves said on Star FM hours after High Court judge Justice Stanley John handed down his ruling.

The prime minister said that after he heard the verdict, the first call he made was to Findlay-Scrubb “to, again, thank her, on behalf of the nation for the sterling work that she did” as the nation’s election chief.

Findlay-Scrubb became elections chief in January 2009 – after retiring from the teaching service – and presided over the 2009 constitution referendum and the general elections of 2010 and 2015 before exiting the post in April 2018.

The main opposition New Democratic Party (NDP) had brought the petitions, challenging the results of the vote in Central Leeward and North Windward.

Those were two of the eight constituencies that electoral officials say the ruling Unity Labour Party (ULP) won on its way to a fourth term in office by securing eight of the 15 parliamentary seats, with the remaining seven going to the NDP.

“… the first election she ran as supervisor, the ULP lost,” Gonsalves said, referring to the 2009 vote.

“ And then we won in 2010 and we won in 2015, but somehow got into a collective madness [with] the NDP, thinking that something went really wrong and they were driven by some internet crazies and some people who call themselves the frontline and they, daily, day after day, month after months, year in year out since December 2015, they cursed this woman, they slandered her, they verbally abused her, they assaulted here, they made life difficult for her at her workplace, this woman who has served this country well as a teacher, who had done yeoman service in the Teachers’ Union and in the Teachers Credit Union, who had been and still is a pillar of the Anglican community.”

Gonsalves said that “the only disappointing” in the development is that no authority figure in the Anglican community came out in defence of Findlay-Scrubb and said “this woman is a woman of integrity, this woman would not be involved in any skulduggery, this woman plays it straight.

He said that the nation must not forget that former leader of the Opposition Arnhim Eustace, who is Member of Parliament for East Kingstown, “went on the line there giving support, comfort, succour to these elements”, Gonsalves said, referring to the daily protest that took place, for months, outside the Electoral Office in Kingstown.

The prime minister said that current Leader of the Opposition, Godwin Friday, as well as Members of Parliament for West Kingstown and Central Kingstown, Daniel Cummings and St. Clair Leacock did so also.

“… they went there and lent their support to the harassment, the verbal terrorism, the denunciation, the slander, the defamation, directly and by innuendo against this god-fearing woman,”

The prime minister said that at several points in the judgement, Justice John said, “and I believe the evidence of the fourth respondent” – Findlay-Scrubb.

The prime minister also thanked the other electoral officials “who performed their national duty”.

He said that the “the only stricture that was levelled against any individual from an official standpoint” was the way that Winston Gaymes, the returning officer for Central Leeward conducted himself at the final count.

The Organisation of American States election observer mission has also stated in their report that Gaymes was partial to the ULP agents during the final count and dismissive of the complaints of the NDP agents.

The mission further said that, in one particular instance, Gaymes converted into new instructions about the counting, a concern raised by the ULP agent.

In his ruling, Justice John said:

He noted that the right to vote is enshrined in the constitution, adding, “and the citizenry in the exercise of that right, must not feel intimidated in any way.

“Partiality toward any party by an official performing an important function in an election cannot be condoned. Free and fair elections conducted properly under the existing laws is a constitutional mandate in St. Vincent and the Grenadines and nothing must be done to affect public confidence in the impartiality of an election. The court trusts that this condemnation will not go unnoticed.”

Gonsalves interpreted this as the judge saying, “… well, that behaviour should have been better but that they didn’t prove that anything material happened to alter the outcome of the election and in that particular area where Mr. Gaymes was”.

In summarising the judgement, the prime minister said:

“So, the long and short, after three years and a few months, when they have to step up to the plate, they really ain’t make it. And they gone on the road now trying to fool their supporters.”

He was speaking about the disturbance in Kingstown during which NDP supporters temporarily stood in the streets and impeded or blocked the flow of traffic at some points.

“Well, I just remind everybody that the Commissioner of Police and his men and women they are sworn to uphold law and order and they will use their good sense in addressing any breaches of the law and order.”

He said it may well be that the NDP thought that “this rag band of a handful of people who are disappointed, who had fooled themselves into believing that they would get victory, because they had no basis on which to get it, in fact or in law.”

He said that the police probably took the decision that “once we keep the traffic going, they could make themselves nuisances or, as I heard some people saying, one or two of them text me, saying they making a-s-s-e-s of themselves and the police probably felt, well, let them run themselves out of steam and when the sun gets hot, they go home.”

Gonsalves said that in the final analysis, it turns out that the NDP had no evidence to support their claims about the election.

“… they were just plain wrong and whatever little they could point out, some minuscule thing, that this was not done, the ‘i’ was not dotted, the ‘t’ wasn’t crossed, it didn’t amount to a hill ah beans and, accordingly, under the law, the judge had really no alternative when you access everything to dismiss the petitions  and to say that Louis was correctly returned by the returning officer as the winner of the constituency in Central Leeward and Montgomery Daniel was the winner in North Windward.”

He said what the NDP has to worry about now is that the judge ordered costs against Exeter and Baptiste.

“And is a lot ah money. But that is a discussion for another time,” Gonsalves said.