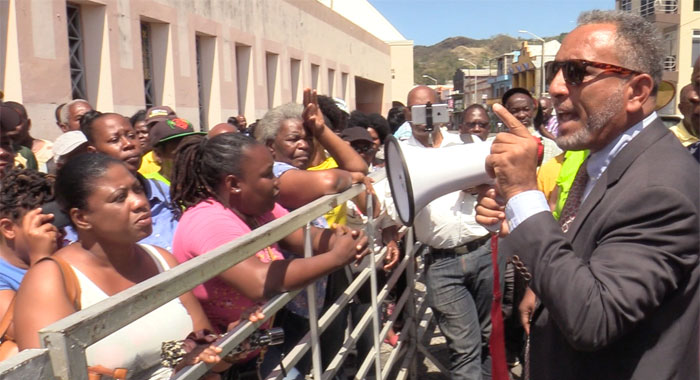 One of the politicians whose election petition the High Court dismissed on Thursday has vowed to appeal, while the other has remained mum on the decision.

“Is its very disappointing but it happened before where the case was thrown out, we went to the Appeal Court and were successful there,” Benjamin “Ben” Exeter of the main opposition New Democratic Party (NDP) told iWitness News shortly after Justice Stanley John dismissed his petition.

“Seems that we can’t get judgement in St. Vincent so we will find another venue, the appeal court,” Exeter said.

Exeter was challenging the announced victory of Sir Louis Straker of the ruling Unity Labour Party in the Dec. 9, 2015 general election.

Lauron “Sharer” Baptiste, also of the NDP, has also failed in his efforts to get the court to rule that the ULP’s Montgomery Daniel was not duly elected Member of Parliament for North Windward.

Exeter’s comments came shortly after Justice John read a summary of his judgement in court.

The judge ruled that the only evidence that Exeter produced to support his claim was that the returning officer for Central Leeward, Winston Gaymes was partial to Sir Louis during the final count.

“Of course, we are disappointed but as soon I have had an opportunity to read the judgement, I may have come comments,” he told iWitness News.

Keith Scotland, who was Baptiste’s lead counsel, said he would take his cue from counsel John.

The petitions were filed on Dec. 31, 2015, when Arnhim Eustace was leader of the opposition and president of the NDP.

Eustace, who is Member of Parliament for East Kingstown, told iWitness News that he was disappointed with the court ruling.

“Well, I am disappointed but we ain’t finish yet. The matter will continue.”

He said his comments were an indication that the petitioners will appeal. We are not finished on the matter. Far from that, as a matter of fact.”

And Leader of the Opposition and NDP president, Godwin Friday, in his immediate reaction, told iWitness News:

“I would say that I was profoundly disappointed with the decision of the court today,” he said, adding that he would reserve further comment until he had seen the judgement.

“But I came to court today confident in the positions that were advanced by the petitioners and the counsel and I am very disappointed that the court did not see the evidence the way that our lawyers, our petitioners and I would say that a vast segment of the Vincentian community saw it.”

Friday, who is also a lawyer, said that Justice John had said that he had found no evidence to support the petitioners’ allegations.

The opposition leader, however, said that some of the revelations during the trial outraged the public.

“… obviously, we do not agree with his decision, but the judge, that is his prerogative and we will take advice from our counsel and decide how to move forward.”

Meanwhile, Maia Eustace, a lawyer, who was an agent for Exeter on election day and during the final count on Dec. 10, 2015, told iWitness News:

“We remain in this battle and we will discuss our options going forward.”

She said she was disappointed with the court ruling.

“But we still have to have our discussions, perform a post mortem and decide on next steps. There are always next steps.”

And, Member of Parliament for Central Kingstown, St. Clair Leacock, an NDP vice president, was lost for words after the judgement.

Asked if he had any comments, Leacock told iWitness News:

“None whatsoever. I am just dumbfounded”.