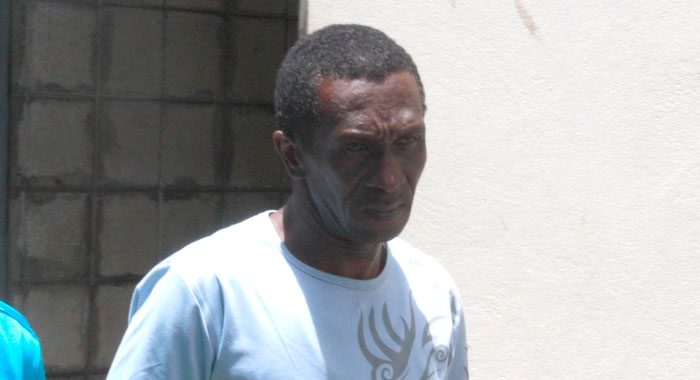 Lenny Baynes will have to serve 26 years of the 46-year jail term. (iWN file photo)

A Park Hill man who has 27 previous convictions, including for wounding, was, on Monday, sentenced to 46 years in jail for a late-night cutlass attack during which he attempted to kill his ex-girlfriend and her sister.

However, Lenny Baynes will only serve 26 years of the sentence.

The other sentences will run concurrent to the 18-year prison term.

On the night of Oct. 8, 2017, Baynes used a ladder to enter the upstairs bedroom of Bernadette’s home at Belle Vue. Sutherland had ended her relationship with Baynes when he was in prison for another offence.

Baynes had a cutlass with him at the time and met the woman asleep on the bed along with two young children, including his own child.

During the attack, he chopped the sleeping Sutherland several times about her body, resulting in four lacerations, including one to the left side of her neck, which the medical report described as very deep.

She also suffered a chop to the head.

Sutherland tried to get out of bed but collapsed and was later taken to hospital.

After leaving the bedroom, Baynes came upon Kenisha, who was watching television in the living room.

Baynes told Kenisha that he was going to kill her.

He swung the cutlass at her and the woman blocked the blow with her arm, resulting in a serious injury.

Baynes then swung the cutlass again at her resulting in more wounds.

Kenisha screamed for help and her boyfriend, Dalwyn Pope, who had been asleep on the living room floor rushed to her assistance and wrestled with Baynes.

The men tumbled down a flight of stairs and in the struggle, Pope was able to pin Baynes to a wall.

Baynes then told Pope that he had no issue with him but that he had come for the other people in the house.

Pope was able to get Baynes outside and relieve him of the cutlass. Baynes tried to push Pope over a river bank. He picked up stones, threw them at Pope and ran away.

Before leaving the scene, Baynes saw Bernadette’s mother in an upstairs bedroom of the house and told her he would kill her next.

Baynes told Bernadette’s mother to check on her, saying, “she must be dead by now”.

In mitigation, Baynes told the judge that he had initially pleaded guilty to the indictable offences at “the small court” but a police officer told him that he could not.

He was apparently referring to the preliminary inquiry, where accused persons cannot plead to indictable offences.

During the preliminary hearing, a magistrate determines if there is enough evidence to commit a person to trial before a judge and jury at the High Court.

However, when Baynes was arraigned at the High Court, he pleaded not guilty, leading to the trial during which a jury convicted him.

In mitigation on Monday, Baynes accepted responsibility for his action and apologised but, at times, seemed to attempt to justify them.

He also said he was wounded during the attack and he explained himself to the police, but no one was charged.

“My lord, I am sorry that what happen but this ain’t happen through because of me,” he said.

“I did not go to do this really because of me. I do this because of fits,” he said.

Baynes told the court that he was “really sorry” for what took place.

He said the is a father of six children “and I have two in the home that suffering, that come up without a parent while I have to do certain things in life to survive.

“I don’t want my children like to be up them kinda way,” Baynes said and asked for leniency.

He said he could hardly survive in prison on his own.

“I ain’t get nobody at my side. I’m a sickly man, my lord,” he said, adding that he is sorry for what he did to “my baby mother”.

“I get damage too from them, my lord, by six ah dem beating me, my lord,” the man said.

He said that all his stuff was burnt and he had nothing left and that his girlfriend’s family broke down his place.

“And no thanks, my lord. I do a load of thing to support dem people my lord, and I never expect dem wudda do me this. Trust me, my lord,” he said.

In handing down the sentences, Justice Cottle said he reminded himself of the classical aims of sentencing that the trial judge must always have in mind, namely, retribution, deterrence, prevention, and rehabilitation.

For attempted murder, Cottle noted that the maximum sentence is lifetime in prison.

He said that the UK court has held that the sentence for killing someone should be higher than an attempt to kill someone, all other things being equal.

Regarding the attempted murder of Bernadette, Cottle began with a benchmark of 12 years and then considered the aggravating and mitigating features.

He noted that Baynes’ attack was on a sleeping woman late at night and that Baynes had attempted to chop the woman to death while she was in bed with his child and another child.

He said that a weapon was used and multiple wounds were inflicted.

He said that during the trial, Baynes displayed no remorse.

The judge said he found no mitigating features and was content to move upward from his starting point by three years.

He also considered an aggravating featuring relating to the offender, Baynes’ 27 convictions, including for wounding with a cutlass and several convictions for assault and causing actual bodily harm.

“What is clear to me is that you are not taking advantage of the opportunities for rehabilitation which have been provided by your previous periods of incarceration.”

The judge, therefore, added a further three years to the man’s sentence.

Regarded the attempted murder of Kenisha, Cottle started with a benchmark of 12 years.

He noted that the attack on Kenisha followed the earlier brutal assault on Bernadette.

The judge pointed out that it was an unproved attack on a young woman late at night in the sanctity of her home.

“It was only the bravery of her boyfriend, Pope that prevented a worse fate befalling Kenisha.”

The judge said he found no mitigating feature.

He, therefore, sentenced the man to six years, to run concurrent with the first.

Cottle acknowledged the second sentence was much shorter than the first.

“It is that way because I am taking into account the totality principle,” he said.

The totality principle “requires a judge who is sentencing an offender for a number of offences to ensure that the aggregation of the sentences appropriate for each offence is a just and appropriate measure of the total criminality involved”.

Regarding the two counts of wounding with intent, the judge noted that the maximum penalty is life imprisonment.

He, however, imposed no additional sentences, saying he considered them to be included in the attempted murder.

Justice Cottle said the maximum sentence for wounding was life in prison.

He began with a starting point of six years and took into account that Pope’s wound was relatively minor.

This, the judge said, was the only mitigating factor, adding that the wound was inflicted using a weapon and that the attack took place late at night in a home.

He reiterated that Baynes has “a plethora” of previous convictions for violence and causing grievous bodily harm to others.

Justice Cottle sentenced Baynes to seven years in jail, to run concurrent with the 18-year sentence.

For aggravated burglary, the judge began with a starting point of 10 years and added five years for the aggravating features, arriving at a 15-year prison term.

This will run concurrent with the sentence for the first count.

The damage to property charge related to a window worth EC$636.
The judge said he had considered imposing a fine, but, given his earlier sentence, he is concerned as to when or whether any such fine would be paid. The judge, therefore, sentenced the man to six years in prison to be served concurrent to the first count.

After the sentences were handed down, Baynes told the court that he was currently serving a sentence and asked if that could be discontinued.

However, the judge told him that regardless of what sentence he was serving, those handed down on Monday began that day.