After 18 years of ULP rule, ‘the state of SVG is sound’ — Gonsalves 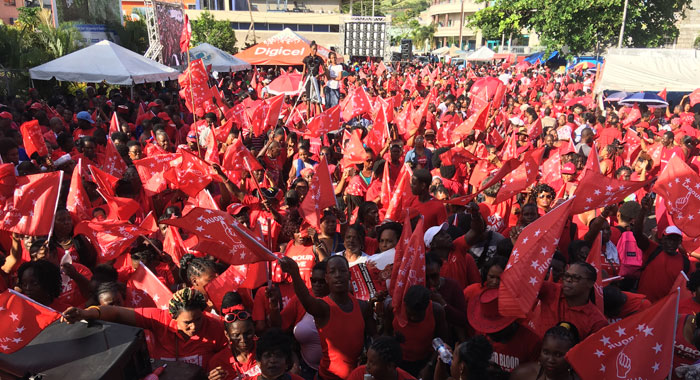 ULP supporters at the rally in Kingstown on Thursday, to mark their 18th anniversary in official, which was March 28, 2019. (iWN photo)

The Unity Labour Party, on Thursday, celebrated 18 years in office with a march and rally in Kingstown, at which Prime Minister Ralph Gonsalves told party supporters and media audiences that things are well in St. Vincent and the Grenadines (SVG).

“The state of the union, the state of St. Vincent and the Grenadines is sound,” Prime Minister Ralph Gonsalves said as he extended greetings to Vincentians in the diaspora.

“We have a compelling developmental narrative and progress is being made in the interest of the people,” Gonsalves told a rally at Heritage Square in Kingstown.

Flag-waving supporters of the ULP, clad in red — the party’s — led by Gonsalves, marched from their party headquarters on Murray’s Road to downtown Kingstown, making a lap around the city before congregating at Heritage Square for the rally. (See video at end of post)

They were celebrating the 18th anniversary of the ULP election to office on March 28, 2001.

Gonsalves said that when the ULP came to office, 26 per cent of the population lived in dirt-poor poverty.

He said that the number has since fallen to 3 per cent, even as the number of persons affected by under nourishment had moved from 22 to less than 5 per cent.

The figures show that over 8,000 more persons are employed today than in 2001, Gonsalves said, adding that the average income per head of population in 2001 was under EC$8,000 a year.

“Today, it is almost EC$22,000. The minimum wage was increased three times since 2001, while under the 17 years of the NDP, it increased only once,” the prime minister said.

He told party supporters that between 1987 and 2001, when the New Democratic Party was in office, National Insurance Services pension was increased once.

It has been increased four times since the ULP came to office.

The wealth of the country, as measured in terms of the GDP, was just over EC$800 million when the ULP came to office, but in 2018, it was EC$2.2 billion, Gonsalves said.

All 12-year-olds are at school and the population at Community College has increased from 500 to 2,200 students.

Today, nurses are being paid a stipend of EC$1,000 a month to go to school.

“Poor people children couldn’t go to nursing school. They can now go to do degrees,” Gonsalves said, adding that Vincentian nurses are in demand all over the world and the British came recently to recruit over 100 of them.

“Only two countries in the Caribbean have surplus of nurses: Cuba and St. Vincent and the Grenadines,” Gonsalves said.

Garbage used to be collected only in Kingstown and the environs; today, it is collected once a week from Fancy and Fitz Hughes and twice a week in the Grenadines, the prime minister said.

“I am talking about things which touch our lives,” he said, adding that under the ULP government, the state has distributed nearly 4,500 housing lots and the government had built some 2,300 houses.

The prime minister said that whereas a handful of students were going to university, thousands have enrolled since 2001, including under special programmes for the poor and disadvantaged.

Gonsalves said there is 25 per cent more houses than in 2001.

“You go around the Caribbean; there is no country in the Caribbean which has seen as rapid an expansion of houses being built as in St. Vincent and the Grenadines.”

He said that his government spends EC$42 million a year on secondary education, while in 2001, just under EC$13 million was being spent.

He said his government has built more playing fields than any other government in the history of the country.

And, for the first time since 1763, a government arrived in office at a time when SVG did not have one dominant agricultural crop.

“Colonialism had, at various stages, sugar, cotton and arrowroot.”