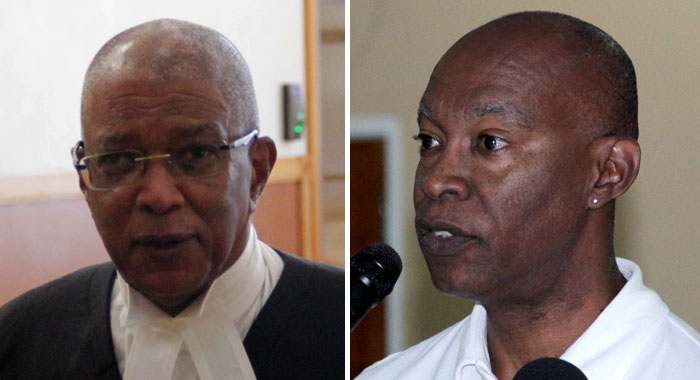 A lawyer for the government in the election petitions case has written a third letter to the High Court in his efforts to get former acting High Court judge, Justice Stanley John to make changes to his March 21 judgment in which he dismissed the petitions.

The latest letter from Joseph Delves came on Thursday, April 4, following on letters on March 22 and 27 to the Registrar of the High Court, Andrea Young and copied to Maia Eustace, instructing solicitor for the petitioners.

In the April 4 letter, Delves asked that the judge, whose appointment ended on March 21, be reappointed so as to make the changes that his side is requesting.

The respondents want the judge to amend his ruling to explain why he ruled in their favour on two important points in the petition that the NDP filed challenging the Dec. 9, 2015 election in North Windward.

The requests came amidst suggestions by the opposition New Democratic Party that they were considering appealing the court ruling on both petitions.

Opposition Leader Godwin Friday announced at a press conference, on Thursday, that the petitioners will appeal the ruling  and that his party supports their decision.

Delves’ April 4 letter follows others on March 22 and 27 to the Registrar of the High Court.

In his March 22 letter, Delves told the registrar that there is likely to be an appeal in the matter, so his clients wanted the judge to explain why he rejected the petitioners’ claim that there was no recount of the ballots in North Windward the day after the election.

He also wanted the judge to say why he rejected the claim that there were 39 more ballots than there were counterfoils at polling station NWI, in North Windward.

Lauron “Sharer” Baptiste of the opposition New Democratic Party (NDP) has filed the petition challenging the result of the Dec. 9, 2015 vote in North Windward.

The NDP’s Benjamin “Ben” Exeter is also challenging the outcome of the poll in Central Leeward.

The ULP was returned for a fourth consecutive term in office, having won eight of the 15 parliamentary seats while the remaining seven went to the NDP.

Delves followed up his March 22 letter with one on March 27, noting the urgency of the situation and inquired about whether his first letter had reached the former judge.

In an April 1 response, delivered on April 3, Young told Delves that Justice John’s appointment ended on March 21, but that the lawyer’s letter sent on March 22 was called to the former judge’s attention.

The duration of Justice John’s appointment had been published on the court’s website ahead of the trial.

He had been appointed to replace Justice Esco Henry, who recused herself from the case last December.

Delves replied to the registrar on April 4, telling her that he understands from her April 1 letter that the judge is unable to provide the reasons requested in his letters of March 22 March because his appointment came to an end on March 21.

He noted that Baptiste has indicated, through his lawyer, his intention to appeal Justice John’s decision.

Delves, citing cases from 2013 and 2016 (Bowen v Attorney General — ANUHCVAP 2013/0016, Nov. 4, 2013; and Thomas v Douglas — GDAHCVAP 2014/0036, Feb. 15, 2016), said that the Court of Appeal has made clear on numerous occasions “that where for any reason a first instance judge fails to give reasons for his decision, the Appellant is obliged to request those reasons and present them to the Court of Appeal for its consideration”.

He said that implicit in the court’s settled practice “is the obligation on the first instance judge to provide those reasons upon request.

“It is with this learning in mind that the Respondents whom I represent have approached His Lordship to provide his reasons in anticipation of the imminent appeal, notwithstanding that the primary obligation to make this request falls on the prospective Appellant,” Delves further wrote.

He said he did not understand the registrar to be saying that Justice John “is unwilling to provide the reasons requested, or that my request for those reasons is in any way inappropriate.

“I understand you to be saying only that His Lordship considers himself unable to provide those reasons because his appointment had already come to an end when my request was conveyed to him the day after said expiration.”

Delves said that the solution to the problem “is to arrange for the temporary appointment of His Lordship in order that he may give his outstanding reasons.

“In the circumstances, I hereby request that you bring this letter, and my previous letters dated 22 and 27 March 2019, to the URGENT attention of the Honourable Chief Justice so that she may take such action as she deems fit and proper.

“I look forward to your most URGENT acknowledgement of this letter and your equally URGENT confirmation that it has been delivered to the Honourable Chief Justice and to HIS Lordship Mr. Justice Stanley John,” Delves said.