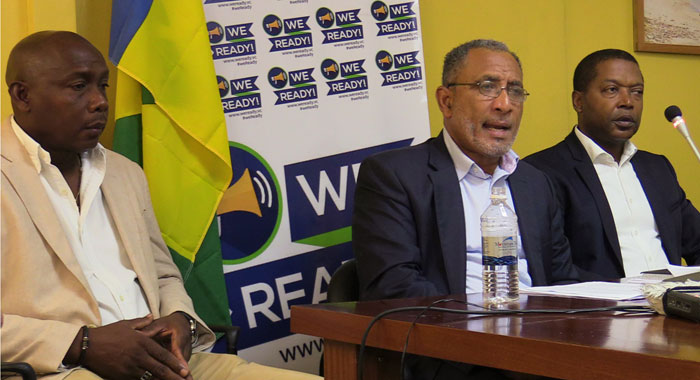 Leader of the Opposition, Godwin Friday, centre, and the petitioners, Lauron “Sharer” Baptiste, left, and Benjamin “Ben” Exeter at the press conference on Thursday. (iWN photo)

The opposition New Democratic Party (NDP) has signalled its intention to appeal the ruling of the High Court, dismissing the two petitions challenging the outcome of the vote in the December 2015 general election.

At a press conference in Kingstown on Thursday, Opposition Leader and NDP President, Godwin Friday, announced the petitioners’ intention to appeal.

The NDP’s Lauron “Sharer” Baptiste and Benjamin “Ben” Exeter filed the petitions challenging the victory of the Unity Labour Party’s Montgomery Daniel and Louis Straker in North Windward and Central Leeward in the Dec. 9, 2015 polls.

However, then acting High Court judge Justice Stanley John, in a March 21 ruling, dismissed the petitions — after a trial that ended two weeks earlier.

At Thursday’s press conference, Friday said that to the “great disappointment and, indeed, consternation” of the NDP, Justice John found that, save for the complaint of partiality on the part of election officials in Central Leeward, there was “no evidence” to support the petitioners’ complaints.

“With all due respect to the court, we, in the New Democratic Party, do not agree with that judgement,” said Friday, a lawyer.

He said that the NDP’s lawyers have advised that the judgement of the court is flawed in many respects and that there are solid grounds for appeal.

“In the court of public opinion, the decision of the court has also been found wanting and the general public sentiment has been critical of it,” the opposition leader told reporters and media audiences.

“For the petitioners, for the lawyers who have ably represented them, for the NDP and for the wider public, the matter is not settled. After three years of struggle, of ups and downs, of highs and lows, of triumphs and setbacks, the matter remains unresolved.

The petitioners, with the full support of the NDP, have therefore decided to appeal the decision of Acting Justice Stanley John to the Eastern Caribbean Court of Appeal. I support that decision and the NDP will, as always, stand firmly behind the petitioners, as the parties in matter, and our legal team as the case proceeds to the Court of Appeal.”

He said that the NDP’s legal team is in the process of preparing the necessary documents to file the appeal.

“When this work is complete, the appeal will be filed without delay,” the opposition leader said.

He said that when the petitions were filed immediately following the 2015 poll, the NDP “gave the commitment to the people of this country that we would pursue the petitions to their just conclusion.

“We had hoped that the moment would have been March 21, 2019 when acting Justice Stanley John delivered his decision. Sadly, that was not to be. Despite the testimony of many witnesses and the cogent and well-supported submissions of the petitioners’ lead lawyers, Mr. Stanley ‘Stalky’ John, Q.C. and Mr. Keith Scotland, the court ruled against the petitioners.”

He said that the NDP is profoundly disappointed with that decision, and will persevere.

“The route of appeal has been used successfully by us before and we will return to that arena again in our continuing and legitimate search for a just result in the matter,” Friday said.

“I am hopeful that the Court of Appeal will review the evidence and the jurisprudence and come to a different decision from that of the trial judge. We have good reason to hope that this will happen. Our lawyers have advised us that the judgement is deeply flawed and that it presents many good grounds for appeal,” Friday said.