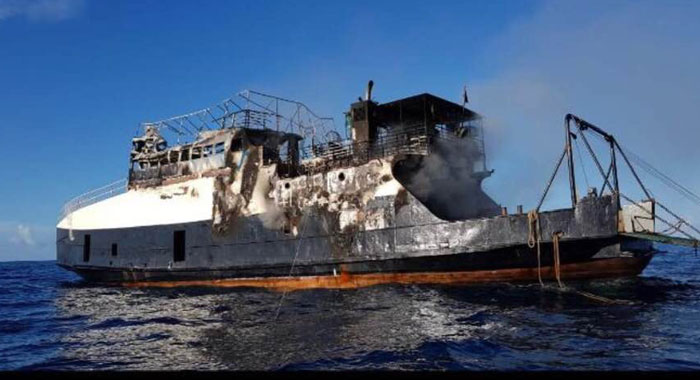 The burnt-out hull of the MV Gem Star afloat at sea on Wednesday, before it was towed back to shore. (Photo: Carron Djsarda Hinds/Facebook)

After smouldering for more than 36 hours while docked in Kingstown, the MV Gem Star was engulfed in flames when firemen opened a door to an area where carbon dioxide was being used to try to extinguish the fire.

The 150-foot vessel, which services the Kingstown-Southern Grenadines route, was then towed towards the western end of Kingstown Bay, where flames reduced it to a floating hull.

The floating remains of the vessel drifted at sea overnight before being towed to the Ottley Hall Shipyard and Marina, where it remained docked Wednesday afternoon.

Photos on social media on Wednesday suggested that the burnt out passenger and cargo ferry had drifted as far as off Barrouallie.

The destruction of the vessel has, for yet another time, raised questions about the capacity of the nation’s Fire Department to fight certain types of fires at a time when  our efforts are focused on wooing even more visitors to the country, both by sea and air.

Bert DeRoche, the captain of the vessel, which is owned by his father, Augustine DeRoche, spoke about the fire in a call to Hot97.1 Wednesday morning, two days after the fire was first discovered on the vessel.

The captain said he learnt of the fire when one of his crew came onto the deck and told him that there was smoke below deck of the vessel, which was moored at the Grenadines Wharf in Kingstown.

A crew member told iWitness News on Tuesday that the fire might have started following some welding that had been done to repair a damaged pipe.

The pipe is said to have been located near to some “packing material” used to insulate the vessel, as part of its original construction.

The crew member said that the fire started on the lower deck of the vessel, in the areas where passengers ride, which is also where the cabins and galley are located.

In his radio interview, DeRoche said that when he went to the lower deck, from the amount of smoke that was there, he thought that there was a fire in the kitchen

He, however, said that the cook said that was not the case.

“So I went upstairs and I called the authorities as quick as possible and I even called a policeman who was on duty down at the police station to tell them to assist because I had some smoke down there. It wasn’t fire, it was smoke, you know like when something burning,” DeRoche told Hot 97.

He said the police came on the wharf and decided to close off the doors to the lower deck because of the smoke.

De Roche said that the fire chief came up to the harbour and told the firemen to put on their gear and to try to go downstairs the boat.

“Every time they attempt to go down, they turning back — story like they ain’t fully equipped,” the captain said.

He said he suggested that he call Keith Howard, a businessman who owns Howard Marine and KP Marine, businesses involved in boat construction and repair and the supply of maritime equipment.

“When he came, they let him in the gate and they were giving him a little problem. He came with like to stop the smoke from down in the boat and he came in and he asked them and they were kind of giving him a little problem. ‘Oh, he down and this, this is their work’, but nothing wasn’t going on. All they were doing was wetting the boat. Nobody making any attempt to go down,” DeRoche explained.

He said there was an ex-police officer who operates a taxi around the harbour.

He continued by saying that the former police officer put on a fire suit and he and Howard – who did not have any fire equipment – along with Rodney King of the MV Barracuda went into the area of the vessel from where the smoke was coming.

DeRoche said that the men locked up everything and opened the valves on the cylinder of carbon dioxide and all the smoke died down.

“So Mr. Howard said, this thing is gonna stop the fire, but you cannot open the door for like two hours,” DeRoche said.

He said that “everything went dead” until around 10 p.m. when smoke started coming up from below deck.

“Mr. Howard, put another one (cylinder of carbon dioxide), it (smoke) went down again,” DeRoche said.

He said that the fire truck and fire fighters left around 3 a.m. Tuesday and he and Howard stayed at the boat.

The captain said that he later left the vessel and went home to shower, leaving the workers at the dock.

“… I went back to the police station. I asked the fire chief so the guys could come back up and open the doors, because it didn’t have no smoke, nothing. Everything calm down.

“But we didn’t know what was going one down in the vessel. When they came up, they say a little smoke; they said the deck was still a little hot; all they were doing was spraying water.

DeRoche said that the fire fighters probably didn’t have the equipment to fight such a fire.

“Mr. Howard is the man who came and say this is the thing that will help the boat in case it going catch afire this going clear up everything,” DeRoche said.

He said that he didn’t think that the vessel would have been destroyed had one of the fire tenders from the airport been used to spray foam into it.

“That woulda help me because it was the same thing that Mr. Howard was doing. It coulda help me.”

The captain said that on Tuesday, Howard placed another cylinder of carbon dioxide into the vessel and said not to open the door.

“But, as the authorities said, they had a cruise ship coming in, which I understand, it is tourist time and the little smoke around the area, you know tourists don’t want to see that.

“The boat wouldn’t sink because is just fire on top. But I was glad for them to get it out from there because it is tourist season and — you know what I mean?”

The captain said he had already called for Ottley Hall Marina to take the vessel from the harbour.

He said they had decided to move it around 6 or 7 p.m.

“But they had a problem downstairs where Mr. Howard told them do not open the door. You have to leave this thing let it die down first. It is a thing you have to leave for hours. I don’t know. Like the firemen and them, they get fed up, they went and open the door and wet down the boat and the fire start to blaze up, everything just get up.

DeRoche said his uncle, Peter Ollivierre, said that he also told the firemen not to open the door.

“And they went and they open the door and that was it. That was the end of the boat. I think they coulda just hook up the boat and take it to Ottley Hall, but the fireman and them get so vex, they wet the boat, they start to thing and geh on because they want the boat move from the dock, which I understand because of the cruise ship–”

Asked where the vessel was at the time of the interview Wednesday morning, DeRoche said:

“I just trying to be strong and do what I hadda do.”

DeRoche agonised over the loss of the vessel at a time when his father, who is “not doing good right now”, had travelled overseas and had left him in charge.

“I can’t even speak to him because he is not doing good right now. Is like he leave me here to do certain things and is like soon as he turn his back — you know what I mean? You leave your son to do something—That’s life but.”