Sugar and salt are deadly killers 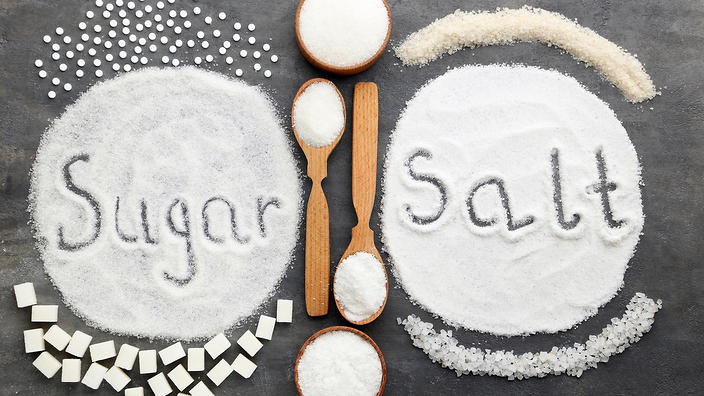 Over the last two decades, Vincentians have experienced a chronic increase in weight and a deadly upward spiral in life style diseases such as diabetes and hypertension, lung and heart ailments as well as young persons who were forced to remove a leg to preserve their lives.

Over the years, Plain Talk has alerted nationals that sickness and death can be avoided if we keep our body hydrated, follow good nutritional practices and make a conscious effort to reduce stress. If we cut the daily intake of food by half, exercise at least three times per week and drink no less than 40 ounces of water per day, we will be well on our way. A good practice to adopt is to stop eating anything that comes out of a can. Preserved or processed foods are packed with salt and sugar and are sapping our energy and killing us slowly.

We know that a good and healthy lifestyle is hard to adopt. The popular culture drums into our heads that we are going to die anyway because something will kill us. Those of us who attempt to watch what we eat are reminded that at best we will die from nothing.

There is a reason we crave overly sweetened and excessively salty foods or snacks.  And it’s not entirely our fault. Many common snack foods have been expertly engineered to keep us addicted, almost constantly craving more of whatever falsely satisfying manufactured treat is in front of us.

Humans have an inherited preference for energy-rich foods like fats and sugars.  Science has established that natural selection has predisposed us to foods high in sugar and fat. Food scientists know this and create ingredients that are far higher in fat and sugar than occur in nature. The most common such sugar is high-fructose corn syrup, which has been proven to be highly addictive.

Foods that weren’t sweet originally, like pasta sauce, are now artificially sweetened to keep consumers craving the product. High-fructose corn syrup (HFCS) is found in everything from ketchup and salad dressing to cereal and breads — foods that aren’t necessarily perceived as sweet.

So what’s so bad about HFCS, the ingredient so essential to the aisles of our supermarket? A tablespoon of the super sweet stuff packs in roughly 53 calories, 14.4 grams of carbohydrates and 5 grams of sugar, while an entire corn has about 123 calories. It’s much easier to ingest extra, empty calories when they’re processed down to a sugary additive, which enhances the flavour of processed foods.

As an ingredient, HFCS was shown in a 2013 study to be as addictive as drugs, like cocaine or heroin, with salt proven to be similarly addictive, opioid-like qualities. Australian neuroscientist Craig Smith has studied the effect of salt cravings in humans for years, concluding that eating excessive amounts of sodium makes people crave salt more, and those who eat less junk food can benefit from lower salt cravings and therefore fewer of the negative effects associated with too much salt consumption.

Even if a food isn’t overly salty, salt may sneak into packaged food more rampantly than expected. Salt is used as a preservative to give food extended shelf life and keep food safe. Salt is also be used to enhance a food’s colour (such as making the crust of bread a more appealing golden brown), as well as a flavour enhancer in foods we may not associate with saltiness.

It is universally established and recognised that salt is extremely addictive, just as much as sugar. The more you consume salt, the more you crave it, and food manufacturers realize this. They continue to add salt to foods because they want us to continue to purchase their products.

It doesn’t matter if the salt is white, pink, sea salt or crystallised — it all has the same effect on one’s body. Packaging may lead us to think that certain salts are healthier, but, truly they are all the singular thing that is bad in excess: salt.

Beyond overeating in general, eating too much salt is proven to have negative effects on human health. Eating too much salt is not good for your health, because the extra water that you hold on to raises your blood pressure. The more salt you eat, the higher your blood pressure. All of this can put a strain on our heart, kidneys, brain and arteries, which could lead to a stroke, heart attack or kidney disease. And yet, we are becoming increasingly casually addicted to the stuff.

While addictive drugs like cocaine and heroin are illegal, we currently have no regulations on the amounts of sugar, sweeteners and salt that can be added to foods available to the public. This reality underlies the looming public health crises of obesity and related illnesses.

A significant percentage of our people are overweight or affected by obesity, a condition closely associated with heart disease, stroke, type 2 diabetes, certain types of cancer and premature death. And even armed with this knowledge, too many of us are regularly lured in by food that is designed to be hard to resist.

Making items highly palatable is just the beginning. Pumping food full of sugar to the person with the sweet tooth is what junk food companies strive for. Sugar releases dopamine, the feel-good hormone in the brain, which associates the sugary food with pleasure — causing the body to crave more. That feel-good sensation will keep you hooked on certain foods, which will bring instant comfort when consumed.

Scent can play a part in the emotional attachment to food. Associating food with pleasure keeps humans addicted even further to the foods engineered with excessive sugar, salt and fat to keep you craving more.

How can we stop the growing addiction to food? Choose moderation for foods that you think could be highly addictive for you. Make sure you are consuming a well-balanced diet and drinking plenty of fluids, especially water. When grocery shopping read nutrition labels and avoid foods with high sodium and sugar content. Truth is nothing that kills is terribly important. Food, like sex is highly overrated.

**Jomo Sanga Thomas is a lawyer, journalist, social commentator and Speaker of the House of Assembly in St. Vincent and the Grenadines.

One reply on “Sugar and salt are deadly killers”