Men get 6, 14 years for knife attack on G’town resident 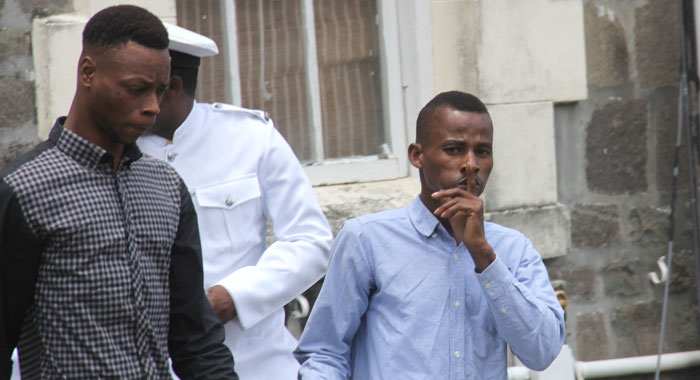 Tyson John, left and Kimani Joe are escorted to prison after their sentencing on Wednesday. (iWN photo)

Two men were, on Wednesday, jailed for six and 14 years for a January 2014 knife attack on a Georgetown man who one of them taunted as he collapsed after the attack, telling him, “Yuh go see who name killer now.”

The victim, Orde Pompey, 55, of Georgetown, may be alive today only because of the arrival of the police, which caused his attackers, Tyson John, 31, and Kimani Joe, 32, of Calder, to flee the scene.

For his crime, John, who was considered a good candidate for rehabilitation, was jailed for six years, while Joe, a former gunshot victim who was described as “a menace to society”, will remain behind bars for 14 years.

High Court judge, Justice Brian Cottle, handed down the sentences on Wednesday at the High Court in Kingstown.

They had been found guilty some weeks ago of wounding with intent.

The facts of the case are that on Jan. 28, 2014, Joe had an altercation with Pompey at a shop in Georgetown.

During the altercation, Joe slapped Pompey and left the shop and returned with a cutlass.

However, the shopkeeper and other persons there didn’t allow him to enter the premises and Joe left.

Later that day, Pompey came back to the shop and met Joe and John at the business place.

Joe displayed some aggression to Pompey, who picked up a stone in an effort to protect himself.

Pompey was trying to leave the scene when Tyson John came up to him from behind and stabbed him in the back with a knife.

On seeing this, the shopkeeper, an unarmed female, intervened and struggled with John, who was still able to inflict another wound on Pompey.

Pompey tried to run away but Joe tripped him.

Joe had a knife and as Pompey was lying on the ground, Joe stood over him and stabbed him in the neck.

The shopkeeper struggled with the men and told Pompey to try to run away.

Pompey tried to run away but got only as far as a neighbouring wall when weakness overtook him and he slumped again the wall.

At this stage, Joe approached him and Pompey begged him to “leave me alone”.

It was only the arrival of a police vehicle in the area around that time that caused Joe and John to desist and flee the scene.

John went to his house and gave a knife to his girlfriend, asking her to hide it. She buried the weapon but later handed it over to the police during their investigation.

Pompey was taken to the hospital, where he underwent surgery and was hospitalised for a week.

A social inquiry report was done on John and Joe.

The court learnt that John did not benefit from secondary education and was raised by his paternal aunt, after his mother migrated when he was 2.

John is the father of several children, including a young son who requires surgery to address his scoliosis.

His relatives and neighbours said that he is not a troublemaker and all asked the court to have mercy on him and to avoid a custodial sentence.

During his interview with the social worker, John still refused to accept that he injured the complainant.

He said he was at the scene and saw Joe involved in a scuffle with Pompey and intervened to try to part them.

Prison authorities said that since John’s conviction and remand for sentencing he has been of good behaviour.

The mother of his children stressed how difficult life would be for her and her children if he were incarcerated.

John also underlined this in his submission to the court.

His former employers also asked the court to give him a second chance.

On a whole, the social inquiry report presented John as a good candidate for rehabilitation.

Meanwhile, the social inquiry report on Joe said he is the second of his parents’ four children.

He attended primary school but not secondary school and has several convictions, including for wounding a victim with a knife and possession of an offensive weapon.

In the social inquiry report, the prison authorities describe Joe as a problematic inmate who is often involved in violent activities.

They say they have made efforts to engage him in farming in an effort to alleviate some of his aggression but that has not always been successful.

In his interview with the caseworker, he denied ever stabbing Pompey.

And even after the irrefutable evidence presented during the trial, Joe still maintains that he did not stab nor did he see John stab Pompey.

Joe’s relatives and others who were interviewed said he seems unable to control his temper.

Residents of Calder and Georgetown, where Joe lived, all said he was a menace to society.

They said he was dishonest and quick to threaten to use weapons on those who sought to correct him.

One person described him as “aggressive, violent, and quick tempered”.

Meanwhile, in the victim impact report, Pompey said his injuries have reduced his capacity to earn a living.

He is employed as a blockmaker and is now unable to exert himself as before and his productivity and income have diminished.

Pompey believes that he has permanent nerve damage and still fears that if Joe is released from prison, he might renew his attack on him.

In handing down his sentence, Justice Cottle noted the aims of criminal punishment are retribution, deterrence, prevention, and rehabilitation.

The offence carries a maximum penalty of life imprisonment.

The judge began with a starting point of 10 years and moved the sentences up because of the aggravating factors.

These include the fact that the men came to the scene with knives, showing some level of premeditation.

Justice Cottle also said there was some level of revenge, adding that the men were clearly motivated by the altercation between Pompey and Joe, when Joe was prevented from entering the shop with a cutlass.

“This was a joint concerted attempt,” the judge said, noting that the armed men both stabbed Pompey and that multiple stabs were inflicted.

The men, who did not have a lawyer asked for leniency, with Joe saying he has been unable to use his right hand since he was shot as a youth “by my own black people”.

One reply on “Men get 6, 14 years for knife attack on G’town resident”