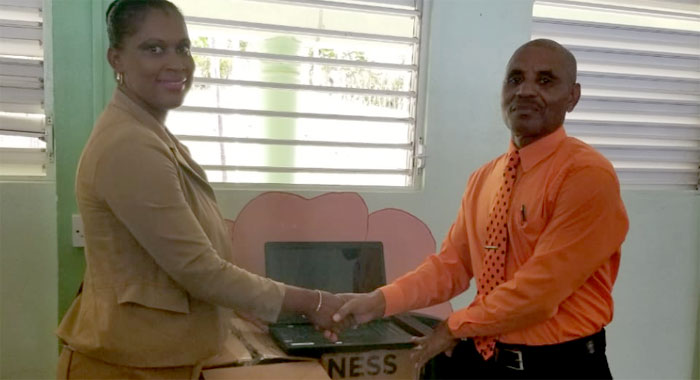 Shevern Lewis-John, who represented the donors, hands over the equipment to Colbert Bowens, head teacher of the Fancy Government School.

Teachers at two schools in the North Windward district are now better equipped to incorporate the use of information communication technology in the delivery of their curriculum.

This laptop donation was made possible through the contribution of Branon Sardine and Walcott Hillocks, Vincentians living in the diaspora.

The handing over took place at the Fancy Government School by Shevern Lewis-John, who represented the donors.

Lewis-John said she hopes the computers would add to the holistic development of students in the school and to a wider extent, the teaching staff.

Head teacher at the school, Colbert Bowens expressed gratitude and said he was elated as the school had no computers and, therefore, teachers had to use their own computers to get work done.

He stated that with this gift, the teachers will now be able to integrate ICT in their lessons.

Bowens further said he is now looking forward to greater partnership with the donors in whatever way possible in order to aid in the overall development of the school.

The donation to the Sandy Bay Secondary School was said to be timely as the school was in need of additional computers to adequately cater for the number of students writing the CSEC exam this year.

Lewis-John, a teacher at the Sandy Bay Secondary School who was instrumental in sourcing these computers, thanked the donors for the timely gift.

She said the equipment will assist the staff and students to improve their productivity.

The principal, Brendon Child, was also happy for the donation and expressed gratitude to the donors.