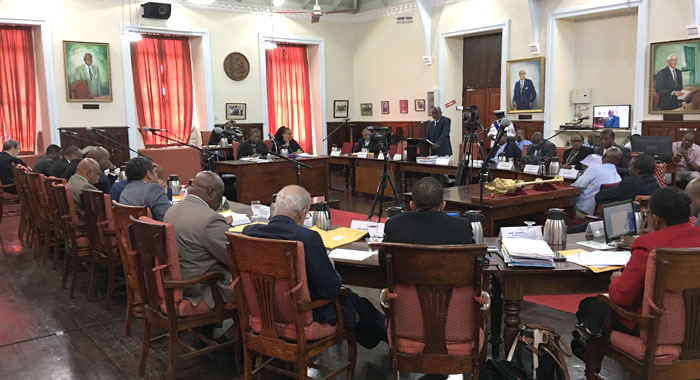 The Vincentian Parliament in session on April 1, 2019. (iWN photo)

A motion on electoral reform, tabled by the parliamentary opposition, is on the order paper for the meeting of Parliament today, Thursday.
The motion is moved by Leader of the Opposition Godwin Friday, and seconded by Member of Parliament for Central Kingstown, St. Clair Leacock, another opposition member.

The Special Voter Registration Period and the lack of impartiality among election officials have been highlighted as being among such problems, the motion states, adding that election observers, including those from the Organisation of American States and the Commonwealth Secretariat, have noted some of the problems and recommended changes to improve the elections process.

It further noted that, in 2017, the Leader of the Opposition wrote to Prime Minister Ralph Gonsalves “to seek to address these serious problems in a bipartisan manner”.

The next general elections in SVG are constitutionally due in March 2021 and the motion notes that those polls are approaching.

The motion says that whereas it is necessary and desirable that “the serious problems in the electoral [system] including those specifically noted herein be addressed before the next general elections by, among other things, amending The Representation of the People Act;

“Be [it] resolved that this Honourable House support a motion to bring about necessary and desirable changes to the elections process in our country by amending the Representation of the People Act and by adopting other practical and effective measures to ensure free and fair elections and restore public confidence in our electoral system.”

The opposition leader gave notice of the motion during the April 1 meeting of Parliament.

However, Thomas said tabling the draft motion was not necessary.

Private members’ motions take precedence during today’s meeting of Parliament – the third for the year.

However, the government has employed a number of manoeuvres to avoid the debate of opposition motions in the past, including having government senators table private motions.

Debate of Private Members’ Motions must end by 5 p.m. today.

Friday told the speaker that giving notice of the motion and attempting to table a draft was an action to ensure that the motion is debated.“What I wish, Mr. Speaker, is to ensure that this honourable house engages in a debate on this matter when the time comes. I am giving formal notice here but I will follow the procedures in the rules,” he said.