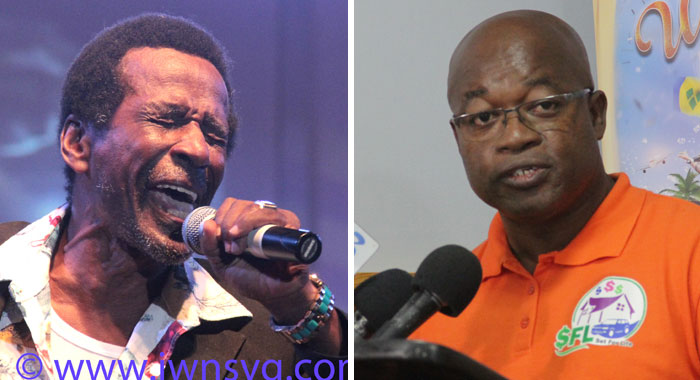 Spokesperson of the SVG Calypso Association, left, and CDC coordinator of Show and head of marketing at Lotto, Anthony Dennie. (iWN photo)

The St. Vincent and the Grenadines Calypso Association (SVGCA) says it has been forced to adjust the date for the Queen of Calypso competition because the National Lotteries Authority (NLA) has planned a show for Victoria Park on the same night.

And, amidst the controversy, both the SVGCA and the NLA have said separately that they are surprised by each other’s actions.

For its part, the Carnival Development Corporation (CDC) acknowledged that one of its members, who is also marketing manager of the NLA, wears several hats, but did not comment on any perceived conflict of interest.

Speaking on Hot 97 FM on Tuesday, Robert “Patches” Knights-King, public relations officer of the SVGCA, said that his group has planned the Queen of Calypso Competition for June 7 at Victoria Park.

He noticed that it was the second consecutive year that the show is being held after about 15 years of absence from the Vincy Mas calendar.

“Everything was going well…” Knights-King said.

He told radio listeners that the Dynamite Calypso Tent in New York City, which is affiliated with the SVGCA and is judged as part of the national competition, was carded to have their preliminary judging on June 8.

The show is normally broadcast live on radio in St. Vincent and the Grenadines, King noted.

“Lo and behold, the calypso tent in New York City has a problem with the venue, something beyond their control, so they had to move it back to the 7th. So we decided we are going to put the calypso queen show on the 8th.

“All this time, nothing was happening, CDC didn’t have any problem with it, because they helped us in some way to finance the show. Everything was going good.”

He said that the SVGCA even held a press briefing last week to disseminate information about the Queen of Calypso show.

Knights-King said that when he arrived at the Victoria Park, where the press briefing was held, SVGCA president Earl “Cabba” Bennett told him that the SVGCA had to move the date because “all of a sudden, out of the blue, some mysterious organisation was going to have a big show on the 8th and we cannot have our show on the 8th” at Victoria Park.

“We were forced to move it because we have no choice if there is going to be a clash. Of course, we have a problem getting young folks to come to calypso…”

Knights-King said he later learnt that the NLA was the one having the show on June 8 at Victoria Park.

“I was upset because the calypso is now picking up, where we are seeing a few young people coming to the show,” King said.

“Last year was a kind of bumper season. For years we didn’t have that kind of crowd, a mixture of young, old, middle-aged an older folks coming to tent. So we were looking for a better year in terms of patrons and, all of a sudden, we heard about this show coming off so I inquired and found out it was the lottery who control the park.”

Meanwhile, speaking at a CDC press conference on Tuesday, Anthony Dennie, who is the CDC’s coordinator of Shows and marketing, confirmed that the June 8 event is being held be the NLA.

He said that the NLA will have a Set for Life fete at the NLA, to market its promotion, of the same name, in which one person would win a house and a vehicle worth EC$600,000.

Dennie defended the NLA’s staging of a carnival show.

“I’m hearing on a particular radio station, ‘Why is the lottery getting involved in doing an event?’ ‘Is the lottery authorised to do events?’ For me, I just say, hogwash, absolute nonsense.

“So why can’t an entity that is doing so much of a contribution to uplifting culture and sports in St. Vincent and the Grenadines get into the whole matter of doing things to generate even more revenue to help our young soca artistes, our pan men and our calypso?” he said.

The NLA was set up to support sports and culture and is the main financier of Vincy Mas.

No competition or use of Victoria Park

Dennie said there is no competition for the use of Victoria Park on June 8.

“Absolutely no competition because the matter was discussed at the CDC board level and the final agreement was that the Queen of Calypso would be on the Friday, June 7, and the Set for Life fete being put on by the National Lotteries Authority on Saturday June 8. That is the decision. I was surprised to hear that Lotto is, for one reason or the other, trying to squeeze calypso out of the park.”

He said the NLA is there to support the calypsonians and what is happening in carnival.

At Tuesday’s press conference, chair of the CDC, Ricardo Adams was asked to comment on any perceived conflict of interest on Dennie’s part in light of the multiple roles he plays.

He said he would hear from the board meeting, this week, the comments from the calypsonians’ association, adding that he wants to be sure they are from the association and just not members of the group