Jomo ‘needs to go for another jog’ — Opposition Leader 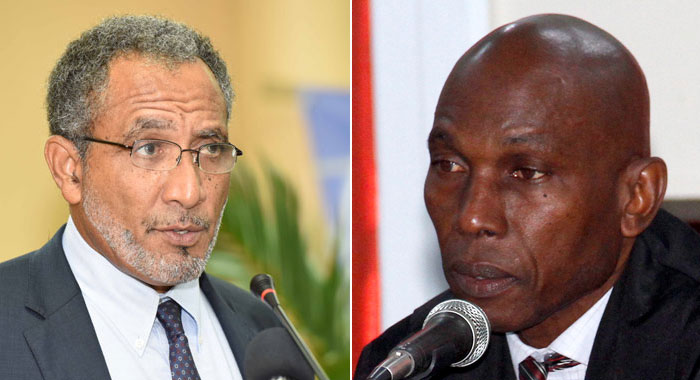 Leader of the Opposition Godwin Friday seems to believe that a few laps on the track will, again, clear the head of Speaker of the House of Assembly Jomo Thomas on proper interpretation and application of the rules of the national assembly.

He was speaking on radio on Monday about Thomas’ decision, last Friday, to allow the government to amend the opposition’s motion on electoral reform.

Neither the motion nor its amendment proceeded to a debate amidst arguments about whether the amendment was permitted under the rules.

“… maybe he needs to go for another jog,” Friday said.

In the social media post, Thomas, an avid jogger, said that it occurred to him, while jogging, that he had erred in his ruling.

In last Friday’s debate, Thomas pointed out the tradition of allowing debate on opposition motions, which changed when the Unity Labour party came to office in 2001.

The opposition leader had appealed for a common sense interpretation of the rules, but Deputy Prime Minister, Sir Louis Straker, said that the rules, not common sense, are to govern the conduct of the national assembly.

He called on lawmakers to guard against what he said occurred in Guyana years ago, when he said there was “the guise of democracy … you had all this notion that you have elections” but the system did not function as intended.

He noted that the democracy in St. Vincent and the Grenadines is based on the on British model.

“… you have convention, meaning practice in the house,” Friday said, adding, “… you cannot put everything in the letter.”

He said that for the first time in the history of St. Vincent and the Grenadines, the Unity Labour Party administration has not allowed the opposition to bring private members’ motions.

“… they have always put it forward and said that their senators can put forward a private member’s bill and, of course, because they are government they give precedence to their private members’ bills.”

He said that this year, the government did not bring a private member’s bill, as had been done in the past, consuming the time so allotted.

“Maybe they forgot or somebody fell asleep at the switch but they thought we weren’t going to bring one. So, this time, what they did, they amended or sought to frustrate ours so it never gets debated and that is wrong.”

In making his ruling last Friday, Thomas said the debate on the issue is an interesting one.

“I feel constrained by all of the points that address the standing orders that the motion is in order,” he said of the prime minister’s amendment to the opposition motion.

“I must say, however, that I think, as I said to the prime minister, which he disagreed with, I think it fundamentally upends the parliamentary procedures and practice that have been established since Independence and members can choose to think that through and see how we go forward. But … based on the rules, I cannot say that the motion cannot carry,” Thomas told lawmakers.