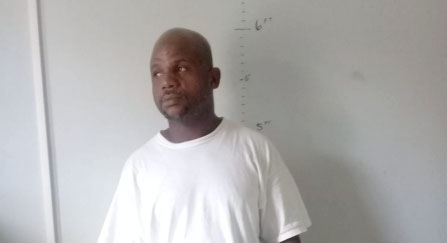 A man who goes by the alias “Lion” has been remanded in custody for two weeks as police investigate other matters in which he is a suspect.

Sylvannus Allen, of Peruvian Vale, pleaded not guilty to four traffic charges and two theft charges when he appeared before Bertie Pompey at the Georgetown Magistrate’s Court on Monday.

The 39-year-old farmer is charged that he failed to renew his driving licence on his birthday — June 21.

He is further charged that on May 17, at Peruvian Vale, he drove motor vehicle TJ 946 without being the holder of a driving permit to drive that class of vehicle.

Allen is further charged that on May 17, at Peruvian Vale, he used the said vehicle without the relevant license for the period Oct. 1, 2018 to March 31, 2019

Police are also alleging that on May 17, at Peruvian Vale, Allen drove the said vehicle without there being in force a policy of insurance in respect of third party risk.

Allen is also charged that between May 16 and 17, at Lot 14 Mountain, he dishonestly received 36 bunches of mature plantain, knowing them to have been stolen, for his own benefit.

He is also charged that within the same period, at Lot 14 Mountain, he stole 18 bunches of plantain, value EC$360, the property of Kendol Sam of Mt Bentick.

Prosecutor John Ballah objected to bail, saying that investigations are continuing into other matters of praedial larceny in which Allen is the chief suspect.

The prosecutor asked that Allen be instead remanded for two weeks, saying that if he is released, he might hinder the investigations.

Pompey remanded Allen until June 3, telling him that, in the interim, he can apply to the High Court for bail.