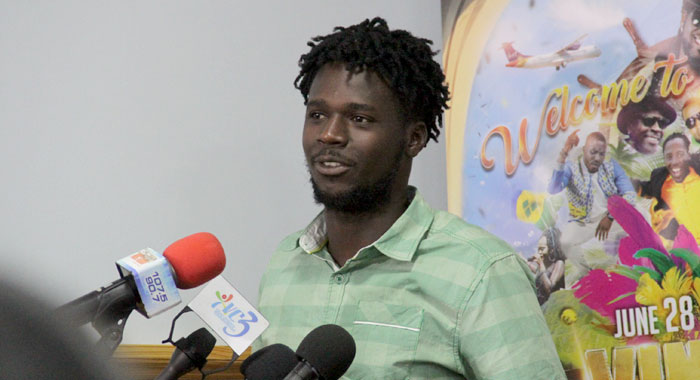 St. Vincent and the Grenadines’ “Young Trending Soca Artiste” for 2019, Caspa G, will get a chance to showcase his fledgling talent on the regional stage this year.

At a Carnival Development Corporation press conference on Tuesday, Minister of Culture, Cecil “Ces” McKie told the 23-year-old artiste he will be a member of the team representing SVG at the 19th Caribbean Festival of Arts (CARIFESTA) in Trinidad in August.

The artiste, whose real name is Zavique Morris, is making waves on the local soca scene, just three years into his sojourn.

At Tuesday’s event, he received his first set of winnings for Vincy Mas 2019, his prizes for winning the “Young Trending Soca Artiste”, an audience-judged competition at the launch of Vincy Mas on May 4.

“It’s a pleasure being here. I ain’t come to say a lot. I just want to encourage the youths to believe in themselves and always put your best foot forward. That’s all I want to say,” said Morris, a graduate of Intermediate High School.

“I just want to say that, for those who have been following it in the rurals, this young gentleman has actually been carrying the rural carnivals this year and I am really excited about the youth coming to the fore. It is something we really want to push,” Adams said.

He also used the press conference to “clear up a little misconception” about what the young artiste received for participating in the Vincy Mas curtain-raiser competition.

Adams said that each artiste who participated in the competition received an appearance fee, which CDC chief executive officer, Ashford Wood, said was EC$1,000.

“The prizes that are being awarded this morning to Caspa G are additional prizes to his appearance fee,” Adams said.

“So I just want to make that clear because I don’t think a lot of people understand that and I heard some reports in the media that suggested CDC has resorted to having people singing for a goat.”

A goat was among Caspa G’s prizes, which also included 10 cases of drinks from Hairoun, and a Samsung Galaxy J4 plus handset, two airline tickets compliments the CDC, and a food voucher from KFC.

“We are just saying that every one of the entertainers got their full appearance fee. These prizes contributed by our sponsors, are an add-on to their appearance fees,” Adams said.

The CDC chief executive said he and the CDC chair have had long discussions about Caspa G because some thought that he should have made it to the finals of the soca monarch competition.

“So this year, when we decided to introduce this competition, Trending Artiste, at the board level, we like to bet on artistes. And for once, I think the chairman and I agreed on an artiste. We lost, by the way.

“But I must admit that on the night of the launch I was very, very impressed by what I saw coming from Caspa G and let me, on behalf of the Carnival Development Corporation, say special congratulations on the performance you put down there at launch,” Wood said before presenting the artiste with his prizes.

“We are very proud of you as a young act; you have taken that to a new level where you are practically dominating the music scene for the moment.”

Wood, however, encouraged the artiste not to bask in his success.

“… the big guns are coming at you,” he said, referring to the soca veterans.

“Don’t get too comfortable. And we really want to take the opportunity to wish you the best of luck going forward,” Wood said.

In noting that each artiste who competed at the launch was paid EC$1,000, Wood said:

“So, the CDC, we make sure we take care of artistes. I was listening to the owner of a radio station some time ago and he actually said the CDC prostitutes artiste.

“And I am still trying to find the definition of prostitute. Very, very hard to find,” he said and listed Caspa G’s winning.

“And, you’d better believe it. A board member has already said, for next year, I am contributing a pig. So we start to plan next year already,” Wood said to laughter.