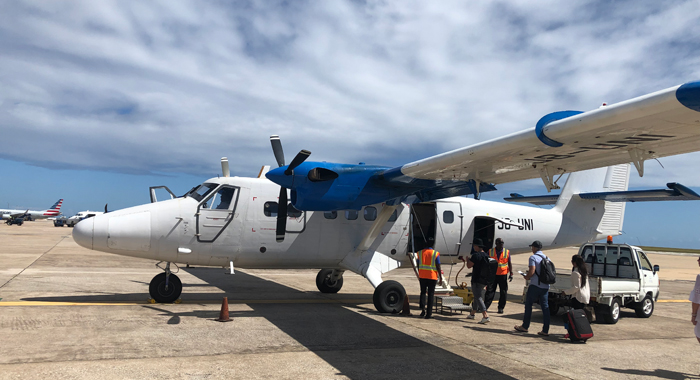 The head of a Vincentian airline says Caribbean governments must stop looking at regional carriers as tax cows, to be converted to beef when they stop lactating.

Paul Gravel, managing director of SVG Air, says that if regional governments do not change their taxation policy on air travel, any airline that replaces the financially challenged regional carrier LIAT is also doomed to fail.

Gravel said that in the last 10 years, Caribbean governments have been struggling to pay for massive capital projects that they have undertaken and found themselves with shortfalls.

“I guess they look at aviation like we are milk cows so they say let’s try and get some more milk from these milk cows. And for a little while it seems that they get milk, but eventually, the cows get sick and they are over-taxed and they are taking too much milk and then the cows get unhealthy and the governments starts looking at the cows and [say] maybe they are no longer milk cows, maybe they are beef cows,” he said recently on journalist Jerry S. George’s Facebook Live show, “Early in the Morning”.

“But that’s a very short way of looking at aviation,” Gravel said, adding that since he got involved in the industry three decades ago, he has seen 50 airline go bust in the region.

Every year, Gravel’s own airline flies about 100,000 persons to Antigua, Barbuda, Montserrat, SVG, Grenada, Barbados, and, up until recently, St. Lucia.

But now, its owners are considering their options amidst the challenges brought on the aviation tax policy of many Caribbean governments, he said.

He said the company has appealed to governments to try and change some of the taxes that they have put on the industry.

“We had a meeting recently with the government of Grenada. We said your taxes have destroyed our business there and the business model can no longer work and if we don’t do something soon, we will have to shut the Grenada operation down.”

Gravel said he has been involved, “on the peripherals”, with several of the regional airlines and the general consensus is that they can’t make it because they can’t get the passenger loads.

He said that at one point, LIAT carried 1.3 million passengers a year, adding, “… my inside sources says if they hit 600,000 this year, they would be lucky.”

Placing the numbers into context, Gravel said that if one multiplies LIAT’s 112 flights daily by its number of seats, it could translate to up to 6,000 empty seats per day.

“So it looks like they are having a shortfall, a conservative shortfall of 600,000 empty seats per year. Why are those seats empty? Because people can no longer affords to travel inter-regional.

“It’s that simple,” he said, adding that his own company has  “watched our business drop off the cliff”.

LIAT, which is owned by the governments of Barbados, Antigua and Barbuda, St. Vincent and the Grenadines, and Dominica, are going through another restructuring exercise.

The restructuring is taking place amidst a statement by chair of the shareholders, Prime Minister of SVG, Ralph Gonsalves, that the immediate injection of US$4.5 could prevent the carrier from flat lining.

Earlier this month, Gonsalves was asked about the impact of taxes on the final price of LIAT ticket, where taxes often exceed the actual cost of the flight.

He said the policy of his government over the last 18 years has been to “keep LIAT in the sky”.

The prime minister said there is a view that the government taxes payable on a LIAT flight are too high and suppress the demand for travel.

“That has come up from time to time, repeatedly and it comes up at CARICOM meetings and OCES meetings, almost every meeting,” he said.

Gonsalves, however, said that in the case of SVG, the US$40 departure tax is among the lowest in the region, adding that in St. Lucia it is US$98, which includes a certain portion for airport development.

“… the extent of the cost of maintaining the airports, a central philosophy of the governments by an large is for the users to pay for it. So that if you want to have a better airport”.

The prime minister said governments are questioning where the money would come from to pay for and operate their airports if they cut back on taxes on air travel.

“That’s the line. Of course, the CDB, there was a study which says that, overall, the regional economy will be boosted with enhanced regional air travel if the taxes are down. Therefore, what you lose on the swing you will gain on the roundabout,” Gonsalves said.

He, however, said some Caribbean governments fear that while this might be true for the region in the aggregate, it does not necessarily mean that it will happen for every country within the aggregate.

“So I am giving you the opposing thesis which is advanced because you are not going to know the truth of any of these propositions until they are tested because each of them is plausible, thought it may be said that they may be plausible with equal reasoning,” the prime minister said.

‘completely dropped off a cliff’

To illustrate the impact of taxes on the airline industry, Gravel said  the bread and butter of SVG Air’s Grenada operation was the day tour from Grenada to Union Island., where they did 20 to 24 charters a month.

He said SVG Air did not make money flying from Carriacou to Grenada but operated the flights as “kind of an essential service that we cross subsidised with other business that we were doing in Grenada.

“And that worked fine until they upped the taxes, until the day tour business disappeared.”

Gravel said that when he first moved to SVG 33 years ago, there was 100-150 persons daily arriving from Barbados to Union Island to go on day tours.

“That day tours business in Barbados has completely dropped off a cliff and the reason is the taxes,” he said, adding that the same has happened in St. Lucia.

“There are no more day tours. The day tour business out of Martinique, the same thing,” he said, adding that the French island was the first to institute the airline taxes.

“… and the governments watched how much money the French were getting for their flights and thought that was a good idea, that’s an area of revenue we have never thought of, so let’s follow suit with the French.”

Gravel said his company was operating 100 private charters a month to Martinique between December to April, but that business dried up and the airline no longer flies to Martinique.

“We have watched Union Island, union island was a yachting mecca in the 80s, 90s, and up until mid 2000s and now there is nobody there…. It’s nothing like it was before. There’s not 400 boats based in the Grenadines anymore. Moorings pulled out, Star has pull out, … Air Martinique closed down, Air Caribe has closed down and it all comes to taxes.”

Gravel was, however, sympathetic to the positions of governments, saying that walk a fine line and need revenue.

“… but if you pout the brake on in the wrong place, you actually destroy commerce.”

The airline executive noted a study by the Caribbean Development Bank makes the situation “as plain as the nose on your face”.

“Well, the governments who commissioned the report from the OECS secretariat, the CDB, now you have Price Waterhouse Coopers doing one. The conclusions are all the same. They are paying for the reports but they are not reading them or they are not implementing them.

“I am is not a politician and not trying to run a government, I am not in their shoes. Each government comes in and they are neophytes and they are having to learn on the job and that must be extremely challenging and they usually inherit a bad hand. And they have to make the best of their hand.

“And their only trick or skill set seems to be taxes. But they apply the taxes in the wrong areas because they don’t know better than apply the taxes in the wrong areas. They look at what seems to be doing well and they tax. But they have to stop putting their hands in the airlines’ pockets because there is nothing there anymore and there are few of us,” Gravel said.

6 replies on “Airlines not revenue cows for govts — executive”