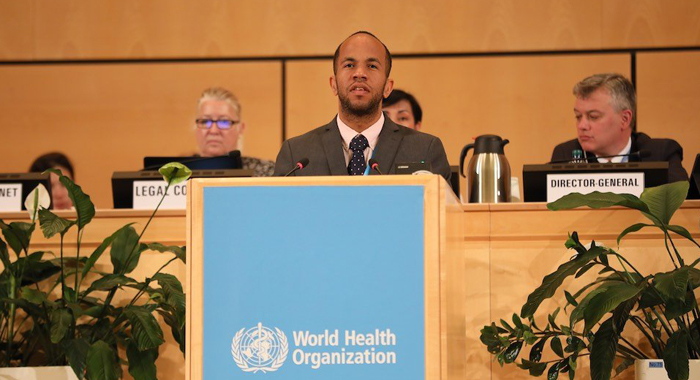 I recently listened to a speech by Luke Browne, Minister of Health Wellness and the Environment of St. Vincent and the Grenadines at the 72ndSession of the World Health Assembly, taking place in Geneva, Switzerland, May 20 – 28.

In addition to leading the Vincentian delegation, he took to the opportunity to advocate for the participation of Taiwan in future assemblies. I would like to openly say congratulationsto my Minister of Health, Senator Luke Browne for showing such leadership and poise in his statement and for representing the interests of over 23 million people in Taiwan. In 2017, The New York Times said Taiwan was a leader in health care and was able to transform its health care system. Moreover, according to Bloomberg’s 2018 annual ranking of health efficiency, Taiwan remained as “one of the best in the world for your money”. They stood at ninth place and Taiwan’s ranking is part of an analysis, which indexes medical costs and value for 56 global economies.

Our (St. Vincent and the Grenadines) stance is admirable. Taiwan has been a great ally for many years.  We should always speak out and stand up for those who are unfairly disadvantaged.

However, in recent times, one may fairly argue that it is as if no one wants to speak out and show leadership when it relates to the health interests of the approximately 110,000 residents of the little island state of St. Vincent and the Grenadines.

Let us be very honest with ourselves, the health care in St. Vincent and the Grenadines leaves much to be desired. Our ministers and high officials themselves seem not to have much faith in our public health care system and often are on the first flight out of state. If not them, we often hear of some close family member. I understand that this hits home for Minister of Housing Montgomery Daniel, Minister of Agriculture Saboto Caesar, and even our Prime Minister Ralph Gonsalves. These three, in recent years, have all chosen not to deal directly or indirectly with the local public health care system and subsequently made the decision to leave. This speaks volumes, is very telling and is where the issue lies. Not everyone in St. Vincent and the Grenadines can afford to fly out or even seek private care locally.

Interestingly enough, our state officials have shown and continue to show this distrust in the system even though we have seen a number of new facilities and “improvements”. Nevertheless, the quality of health care, one may also argue, has gotten much worse than it was in years. It is understood that we have new clinics and health facilities that are understaffed and are critically under-resourced and as a result public health workers are now overworked, underpaid and very frustrated. We have seen the countless protests and read the countless articles detailing unfortunate personal experiences. We have heard of the lack of basic amenities (vaccines, oxygen, sheets, etc). In fact, recently, a claim was made that there was a shortage of the tetanus vaccine and many persons via online and other forms of media spoke out in agreement yet the Ministry of Health said that this was a lie. We have had eight patients dying in six months at a temporary location for the Mental Health Facility. A week ago, we saw how a lady was treated at the accident and emergency section of our main hospital — the Milton Cato Memorial Hospital, where she was literally “left for dead”…

These are the few cases that were published and there are many that haven’t been published due to fear. Our people are literally dying inside.

Honorable Luke Browne, your speech was simply amazing. I really felt the impact and too feel sympathy for the lack of Taiwan’s participation at the World Health Assembly. It is a speech that I am sure many other proud Vincentians would like to share with their children and generations to come. We are also the unfairly disadvantaged. Please give us the opportunity to.

3 replies on “Luke, you’ve spoken for Taiwan. Vincies next?”