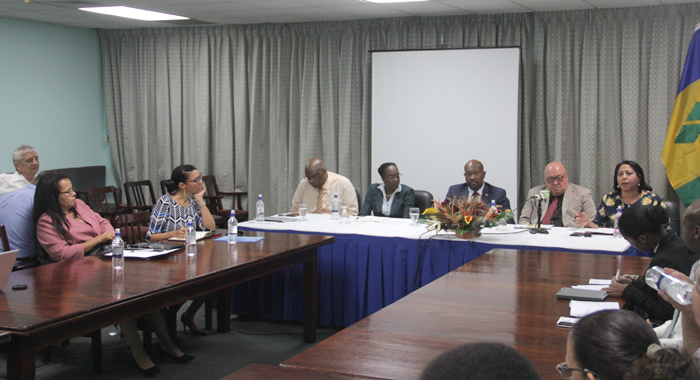 Cuban and Vincentian state officials as well as members of the SVG business community at the event in Kingstown on Thursday. (iWN photo)

A three-member delegation of Cuban trade officials are in St. Vincent and the Grenadines on a four-day visit exploring the possibilities of buying local products, amidst Washington’s latest sanctions against Havana.

Speaking at a press briefing in Kingstown, on Thursday, Gonzalez said the visit was long overdue, adding that in the context of increasing sanctions by the United States, it is important for Havana to look towards the Caribbean.

“As I said, as we wake up every day to a new sanction, we have to look for ways and alternatives to get our supplies and this is something that is going to happen in the future. We see no way that is gonna stop as far as the gentleman in the White House is there.”

Gonzalez said Cuba has been emphasising this for a long time and is happy to say that it has a commercial and economic agreement with the Caribbean, which was signed in Kingstown some years ago.

Another protocol was signed in Guyana in 2017, in which Cuba is granting free access to 2,087 products from most of the Caribbean.

“So this is an important element of the relationship we have with the Caribbean.”

“And we do need to turn to the Caribbean to see whatever we can trade with our brothers, and, in fact, some of the Caribbean countries have the potential to supply Cuba,” he said.

The trade officials said that Havana has sent trade missions to Trinidad and Tobago and Guyana and is confident that it can increase trade with Kingstown.

“There is a lot of potential and there are a lot of things we can do together,” he said.

“St. Vincent and the Grenadines, as a friend of Cuba and beneficiary of many of the initiatives that came out of Cuba have to play our role in trying to see how we can help Cuba, work with Cuba in terms of supplying goods and services.

“We believe that the manufacturing base in St. Vincent is very sound; we believe that the products that we produce in St. Vincent and the Grenadines are very good and are competitive in any market place, we note the produce on the shelves in Cuba and know that working, either individually or with other countries in the region, we can fill a void in Cuba that exist currently.”

He said it was important that the delegation visits SVG so that they would be exposed to the country’s capacity to deliver the products it commits to.

John said that earlier this year, East Caribbean Metals, a Vincentian company, was registered to do exports to Cuba.

“Coming out of this mission, we are going to look at additional modalities for how we can trade and how we can establish a relationship in a very sustainable way with Cuba going forward, not for us to send some produce one month and then we don’t send for another six months, but to come up with a plan for sustainable development of both our regions,” John said.

She said the exploration of business possibilities and the increase of bilateral trade is part of normal economic interaction between the two countries.

Valdespino added that although Cuba is not part of CARICOM, there is a mechanism of interaction, including the Cuba-CARICOM ministerial meetings and high level meetings.

“And this is a space we use in order to coordinate in all the sectors,” she said.

And, Saboto Caesar, SVG’s Minister of Agriculture told the event that with the loss of preferential access of its bananas to the UK market, SVG has to find new markets and establish, at the highest levels, relationships that will facilitate a new trading platform for its producers and people.

“This is about Caribbean integration and it is also about a new expression of our sovereignty… and we can trade with whoever we want to trade with,” said Caesar, who also has ministerial responsibility for forestry, fisheries, rural transformation, industry and labour.