Cross-dressing men told to ‘stop it!’

The message by Sonia Delicia, who emerged second runner-up in the show, was not limited to the cross dressers. 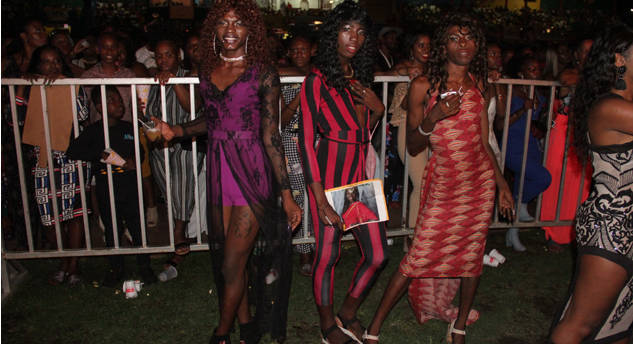 One of the contestants in last Saturday’s Miss SVG pageant had a message for cross-dressing males in St. Vincent and the Grenadines “Stop it!”

However, her words had no noticeable effect on three cross-dressing males who attended the show dressed in women’s clothing and made their presence known at the front of the stage before two of them were escorted out of the VIP area, because they did not have the appropriate passes.

The message by Sonia Delicia, who was sponsored by telecommunications provider, Flow, and emerged second runner-up in the show, was not limited to the cross dressers.

In her talent presentation, the 26-year-old resident of Campden Park and Ottley Hall, appeared as a member of the Spiritual Baptists faith.

She wore a white robe and head tie and carried a candle and rang a bell during her presentation in which she said she had had a vision that morning while in “deep slumber”.

In her vision, Delicia said, she heard “a voice from a distant land” saying she must use the pageant to talk to the Vincentian people because we have too many problems in SVG.

Among the messages from the voice was for Delicia to tell the young men to stop the killing of innocent people.

She had a similar message for rapist and paedophiles, and persons who steal clothes off lines.

“And the voice say to tell all ah the young men who ah put on de female garments and ah walk up and down in town like if dem ah woman and a try fuh fool man until one got lick in South Rivers to stop it,” she said.

Delicia was referring to an incident in April in which Leswan Stewart, 17, of Edinboro, was beaten after he reportedly dressed up as a woman in the community.

The beauty show contestant’s reprimand was rewarded with thunderous shouts from the audience.

Among the persons who should stop their actions are women who take their partners’ money to mind “the horner man” (the man with whom they are cheating on their partner), and women who use bleaching cream

“Dem fuh proud ah dem blackness,” she said of women who use chemicals to get a fairer complexion.

Women who take measures to make their butts look bigger than it really is, those who put on false nails and can’t knead flour and peel green banana, were also called upon to “Stop it!”

Delicia’s final message was for people who were saying all kinds of “vile things” about the contestants, “about who bend up and who twist up and who nah fuh the pageant queen.

“Ah know some ah you in here tonight, ah say to stop it!” Delicia said.

On Wednesday, one of the cross-dressing men, who gave his name as Noel, told iWitness News that there is nothing wrong with his choice of attire.