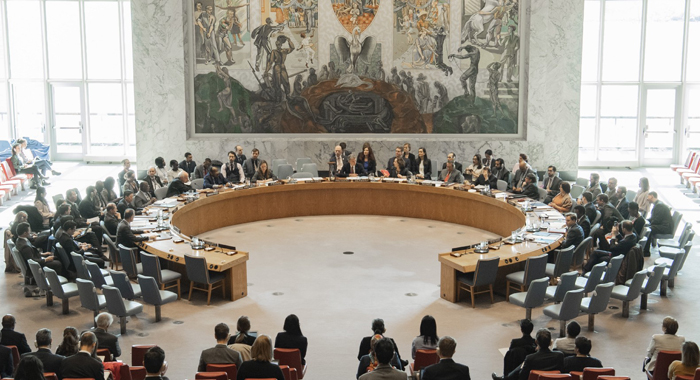 The UNited Nations Security Council in session during the pre-COVID-19 period.

St. Vincent and the Grenadines (SVG), which was elected to the United Nations Security Council for a two-year term beginning Jan. 1, 2020, says it would like to see reform of the UN’s highest decision-making body.

On Sunday, Prime Minister Ralph Gonsalves noted that SVG’s successful campaign was conducted under the rubric, “Friends of all, we strive for a better world”.

He pointed out that the United Nations was founded in 1945, at the end of the Second World War, “because the wise leaders at the time determine that never again must we have such killing in the world”.

Gonsalves said that the UN, for all its limitations and weaknesses, possesses immense strengths and possibilities which are manifested daily.

“To be sure, there are regional conflicts and problems but since 1945, we have not had a conflagration on a world scale involving quote-unquote great powers to bring about the destruction of the human race. And, in that regard, the United Nations has fulfilled the promise envisaged by its founding fathers.”

He, however, pointed out that the U.N. has five permanent members — “the victorious countries after the Second World War that each has a veto power”, namely the United States, the United Kingdom, France, China, and Russia.

“And there are different perspectives but we, for instance, we would like to see consideration given for small island developing states to have a very special position at the Security Council. Africa has its own perspective on this matter and other countries in the world. But that is why we would have interest in debates and discussions,” Gonsalves said.

He said that Kingstown is committed to the fundamental principles of the Charter of the United Nations.

“The equality of states, non- intervention and non-interference in the internal affairs of countries, multilateral cooperation between all counties, and to solve problems by peaceful means and no use of force, except as prescribed by the charter, that is, as a matter of self-defence or if the security council determined that there is a responsibility to protect; that there is an egregious set of breaches of human rights that it reaches to a level that the Security Council will sanction some intervention,” Gonsalves said.

“In other words, we have to be within the framework of international law because without international law, our sovereignty and independence means very little because anybody can bully us and then, of course, there is the important question of the security consequences arising from climate change, which is an existential question for us, and there are many security challenges.”

On Friday, SVG became the smallest country, by landmass and population to ever be elected to the Security Council.

The 150-square-mile island of 110,000 people, secured 185 votes against eight for El Salvador, which made a last minute bid for the seat allotted to the Latin American and Caribbean Group that was up for election.

Gonsalves said that when SVG took decisions at the General Assembly and voted in a way that some people didn’t like, the country “would set out in detail the background to the particular subject matter, the facts as we understand them, the international legal position, and the application of the law to the facts and the conclusion which we have arrived at.

“So that even if you did not agree with us, you would be saying that this is a mature people, a people which are principled, and a people who are ready to take a position in the highest organs of the United Nations.”