Man who attended 4 high schools without graduating jailed for burglaries

The burglar said targeted the house because he worked at a residence opposite to it, so he had a fairly good idea of the home that he was breaking into. 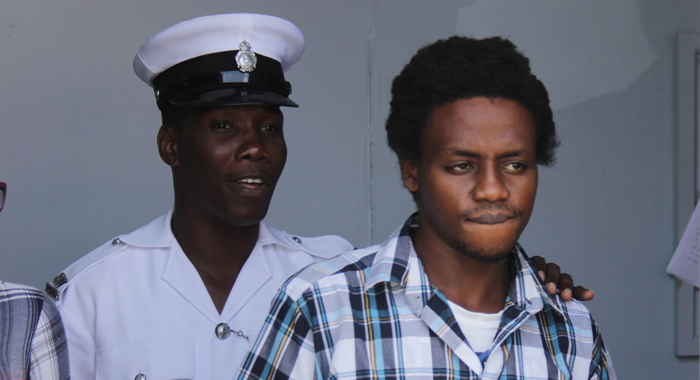 A 24-year-old Glen man, who attended four secondary schools, including one in England, was, on Friday, jailed for 36 months for burglarising a Golden Vale home twice since November.

Glenroy Peters Jr. was nabbed after being caught on camera at the home of Sterling Russell, where he spent some 2.5 hours on May 23, 2019 trying various techniques before breaching the home, which was fitted with burglar bars and an alarm, which broke when it was triggered.

The court heard that the Russells secured their home around 11 a.m. on May 23, leaving everything intact.

They returned about 3:45 p.m. and saw a young man running away from the property with a knapsack on his back and an object in his hand.

The couple discovered that their house was ransacked and several items were missing.

The matter was reported to the Calliaqua Police Station where Corporal 858 Hoyte entertained the report and investigated.

The property is secured with a CCTV system and the footage revealed the defendant breaking into the house.

Peters was arrested and taken into custody.

Detective Corporal 858 Hoyte interviewed Peters in the presence of a justice of the peace and he admitted to the offence.

Hoyte continued his investigation into the Nov. 16, 2018 burglary which another detective had been unable to crack.

Peters admitted to Hoyte that he was also responsible for the Nov. 16, 2018 burglary.

A search was executed at Peters’ home and police recovered four bottles of cologne and two t-shirts and the defendant later handed over a laptop that was stolen on May 23.

Mr. Russell identified the items as his.

In mitigation, Peters, who had no previous conviction, told the court that he attended the King Richards Secondary School in England before returning to St. Vincent sometime between 2011 and 2012.

On his return to St. Vincent, he was enrolled at West St. George Secondary until an altercation arose between residents of Glen and Belair, where the school is located.

He was then transferred to St. Joseph’s Convent Marriaqua, then on to Carapan Secondary School, from which he quit in Form 4.

The defendant told the court that he could not remember when he quit school as he suffers from seizures and has memory loss.

He said that since dropping out of school, he had been working on a passenger van but had to quit as result of the seizures.

Peters told the court that he then began cooking and selling food in Glen, but had to stop because the owner of the place from which he was operating kept pushing him for money and food, notwithstanding their rent arrangements.

Peters told the court that after that, through difficulties at home, he decided to burglarise the Russells’ home.

He said he chose that house because he used to work at a residence opposite to it, so he had a fairly good idea of the home that he was breaking into.

“Did you consider the pain that you were putting the Russells through?” Senior Magistrate Rickie Burnett asked the burglar.

Peters said he did.

“And you went there twice?”

Peters said he considered the pain but seeing that he got through the first time he went back a second time.

He said he sold some of the items he stole in November and kept the rest.

“So you put them through the pain and agony again,” the magistrate said, noting that Peters burglarised the home again six months later.

The magistrate asked the defendant if he had thought only of himself and not the privacy of the Russells’ home and the violation of their space.

“When you conduct yourself like that, what should a court do?” the magistrate said, adding that he supposed that Peters was caught because the Russells incurred additional cost to protect their property after the first burglary.

“All because of guys like you,” the magistrate said.

Burnett said he takes a very serious line with burglary.

“That has always been the way I operate when it comes to burglary.”

Burnett said that, as a magistrate, he follows all his matters from beginning to end, and one of his sentences was recently varied on appeal.

He was speaking of the Court of Appeal having reduced to two years, suspended for 18 months the four-year sentence that Burnett had passed on 18-year-old J’rad Jobe last October.

The Court of Appeal said that the magistrate did not consider the rehabilitation of the teen offender.

During Friday’s proceedings, he asked the prosecutor, Police Constable Shamrock Pierre to address him on sentencing.

Pierre told the court a man’s home is his palace and should be treated as such. “A thief who enters into a man’s home goes only with an intention to kill, steal and destroy. It’s biblical.”

The prosecutor said that the sentence of the court must reflect the seriousness of the offence.

He said that for burglary, the law provides a sentence of 14 years at the High Court and up to seven years on summary conviction.

Pierre said the only mitigating factor was Peters’ early guilty plea, adding that his age may be considered and the fact that it was his first offence.

“But there is no remorse. He went there on the 16th of November and six months thereafter, he went back.”

The prosecutor said he saw more aggravating that mitigating factors and the magistrate agreed, noting that most of the stolen items were not recovered.

“In fact, none of the items on the 16th of November burglary were recovered,” Pierre said, adding that the defendant had said he sold some of them.

“I am asking this court that the sentence which is imposed today must reflect the seriousness of this offence and it should act as a deterrent to others who intend to commit these kinds of crime.”

Burnett asked Pierre to address him on the issue of rehabilitation of Peters, asking if he thought the defendant was a good candidate for rehabilitation.

Pierre said rehabilitation starts with oneself.

“And with him standing in the dock and saying he knew the property, he went there and he got some stuff, he stole them, but that wasn’t enough for him. He went back on the 23rd of May. How could we rehabilitate a person like this who has the mind-set of going back constantly into somebody’s home?”

The prosecutor said he thinks the only way to rehabilitate Peters was to put him behind bars.

“Who knows if he is not watching somebody else’s home,” Pierre said.

The court also heard from Mr. Russell, who said his home had been burglarised five times and spoke of the psychological impact on his wife.

In the end, the magistrate sentenced Peters to two consecutive 18-month prison terms and informed him of his right to appeal.