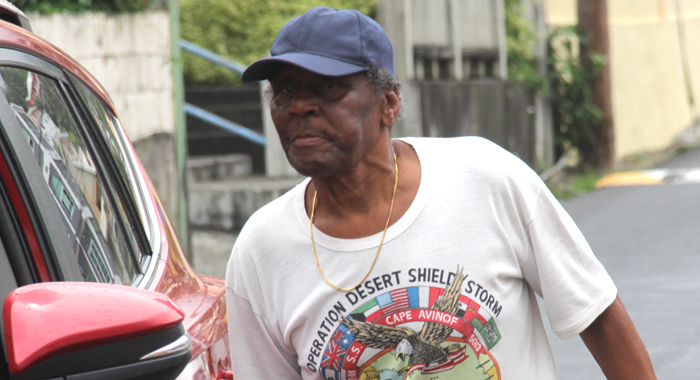 Hermus Patrick, 84, will be sentenced on Friday for possession of a .38 revolvers and 115 rounds of ammunition. (iWN photo)

An 84-year-old veteran of armies will be sentenced next Friday for possession of a .38 revolver pistol and 115 rounds of ammunition without a licence.

On Friday, at the Kingstown Magistrate’s Court, Hermus Patrick, of Layou pleaded guilty to the charges, while his son, Robert Patrick, with whom he was jointly charged with possession of 45 rounds of .38 ammunition without a licence, pleaded not guilty.

The prosecution withdrew the charge against the younger Patrick after his father accepted the facts, paving the way for sentencing.

The facts of the case are that on June 5, 2019, about 12:05 p.m., personnel from the Rapid Response Unit, led by Inspector Nolan Dallaway, went to the home and premises of Hermus Patrick, of Layou, to execute a search warrant in respect of a firearm and ammunition.

Patrick’s common-law wife, Celia Miller was in the home and the warrant was read and shown to her.

She told the police that Patrick was not at home and Sergeant DeShong, a member of the party, who knows Patrick well, went to call him.

Patrick told them that the weapon and the ammunition belong to him and that he brought them to St. Vincent and the Grenadines since in the 1970s.

He further told police that he had ammunition at another house and took them to the house where his son, Robert Patrick lives.

At that house, police found on a cupboard in a bedroom that Robert occupies, a box containing 45 rounds of .38 ammunition.

The older Patrick told the police that the ammunition belongs to him, while his son denied knowledge of it.

In mitigation, Counsel Grant Connell told the court that his client had pleaded guilty at the first opportunity.

However, the Senior Magistrate Rickie Burnett noted that the court documents indicated that Patrick had appeared before the Serious Offences Court and had entered a guilty plea.

The lawyer, however, said that the Chief Magistrate Rechanne Browne has recused herself from the matter, saying that she knows one of the accused men very well, and had entered a not guilty plea before transferring the case to the Kingstown Magistrate’s Court.

Connell said that saying that his client had cooperated with police was an understatement.

He added that Patrick had told the officers that the firearm and ammunition were his and had volunteered information about ammunition at another house.

He told the court that Patrick joined the British Army in the 1960s and served for 10 years, then later worked with Ford Motor Co.

He went on to join the United States Army in 1974 and some years later, shipped various items to SVG; he has been in possession of the firearm and ammunition since then.

The lawyer said his client has walked the straight and narrow for the last 84 years.

Under the tenure of former commissioner of police, Keith Miller, Patrick’s application for a licence to hold a firearm was denied, Connell said.

Connell said Patrick’s application was denied although his training in the United States and the British armies put him in a category in which many resident Vincentians would be found.

He said that Patrick kept the firearm and ammunition in “the bosom” of his house and never brandished them.

He said the weapon and ammunition were not discovered because of “policing extraordinaire”. The information that led to the raid might have come to the police via someone with whom Patrick is involved in a civil matter in the court, the lawyer said.

Connell said that his client was not a threat to the society, adding that the society is more of a threat to him, because of his age and other circumstances.

He argued against a custodial sentence, adding that if the court is minded to impose one, the court should consider a suspended sentence.

The lawyer said that his client has hypertension and diabetes and often spends up to six months a year in the United States, where he also receives medical attention.

He said that whereas the court could consider a fine, Patrick was not a man of much means.

In his submissions to the court, Senior Prosecutor Adolphus Delplesche confirmed that Patrick’s arraignment on Friday gave him the first opportunity to plead to the charges.

He made it clear that the prosecution was not looking for a custodial sentence.

He said that the court should consider a fine, adding that in such cases, the fine usually begins at EC$500 per round.

Delplesche said that the discount for the early guilty plea as well as the mitigating circumstances could bring the fine for the ammunition down to between EC$150 and EC$200 a round.

He said possession of an unlicensed firearm could attract a fine of up to EC$5,000.

In response, the senior magistrate noted that the Serious Offences Court hears 99.9 per cent of firearm cases.

Burnett said he needed some time to do his own research and would give his sentence next Friday.

The magistrate allowed the man’s EC$10,000 bail to continue.