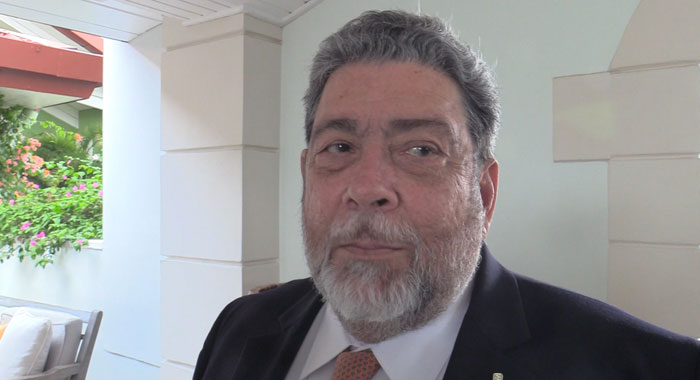 Prime Minister Ralph Gonsalves is not pleased with Luis Almargo treatment of Venezuela during his first time as head of the OAS. (iWN photo)

CASTRIES (CMC) — St. Vincent and the Grenadines Prime Minister Ralph Gonsalves has made it abundantly clear that his country will not support Luis Almagro, who is seeking a second consecutive term as Secretary General of the Organisation of American States (OAS).

Gonsalves said CARICOM leaders here are expected to adopt a position regarding the candidacy during their two days of talks.

He, however, made clear Kingstown position on a possible second term for the Uruguayan lawyer, diplomat, and politician, who he described as having been divisive particularly as it relates to the situation in Venezuela, where opposition forces backed by the United States are seeking to remove President Nicolas Maduro from office.

“I believe out of this conference, this meeting, you will probably have a common position against the candidacy of Almagro. He is too divisive and he is not good for the unity of the OAS and fo Latin America and Caribbean unity,” Gonsalves told the Caribbean Media Corporation (CMC).

Almagro was present at the ceremonial opening of the CARICOM summit here on Wednesday night, but one Caribbean prime minister made it clear that the Almargo “will not be entertained” given that his presence here was not in an official capacity.

Gonsalves said the unity within the OAS “is vital than one individual” and wanted to made it clear “that I am not making a comment against Almagro as an individual, as a personality, I am not questioning his integrity, I am not doing any of those things.

“Quite clearly, he is an individual of merit and worth … but his policy and the way in which he has used OAS explicitly as a partisan battering ram against a member state — well Venezuela is no longer a member state though they have incorporated (Juan) Guaido as a representative…”

Guaido has declared himself as the interim president of the South American country and the OAS last week passed a resolution endorsing his nominee as the Venezuelan representative at the hemispheric body.

Gonsalves said he is certain that Almagro “will know that I will not support him”, adding that while he does not know whether all 14 CARICOM countries would vote for a second term, “I believe there is a substantial majority” who will not support the Uruguayan.

“I am just speaking from my assessment and from my interaction with colleagues. I obviously can’t speak for all of them,” Gonsalves said.