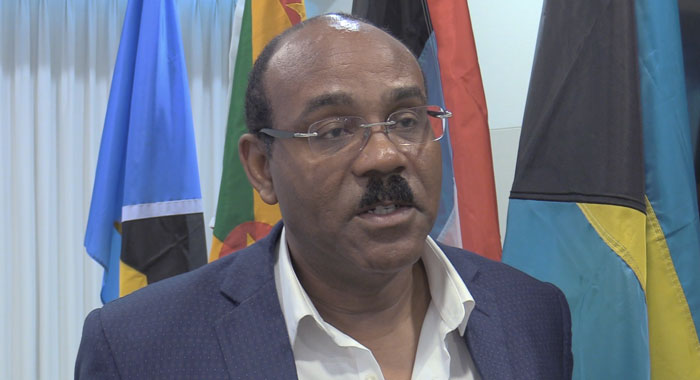 CASTRIES (CMC) —Antigua and Barbuda Prime Minister Gaston Browne Wednesday called for the establishment of a Caribbean bank that would allow the region to counteract the position of international banks regarding corresponding banking.

Caribbean countries have been arguing that the threat by banks in developed countries to withdraw correspondent banking services would exclude the region from the global finance and trading system with grave consequences for maintenance of financial stability, economic growth, remittance flows and poverty alleviation.

Browne, who is leading the region’s response to the issue, told the Caribbean Media Corporation (CMC) that the region has been making “slow progress” on dealing with the matter.

“But at the same time there’s still a problem. The corresponding banks continue to take this policy of risk and return, so as far as they are concerned the banks in the OECS (Organistion of Eastern Caribbean States) in particular are too small and they are in essence looking to bank larger banks within the region which then forces us to consolidate to have bigger banks.

There may even be the need for us to have a Caribbean bank, that is a bank that is owned by various indigenous banks in the Caribbean and one that could have branches in the US diaspora, UK diaspora (and) Canadian diaspora in order to provide services to the Caribbean in the diaspora.”

He said such an initiative would allow for the provision of corresponding banking in the region, especially the smaller ones.

“My understanding is that there is an informal threshold about a billions US dollars, so that generally speaking, banks that have less than a billion US dollars would almost be not bankable for corresponding banking”.

Browne, who is here to attend the 40th meeting of CARICOM leaders, said the irony of the entire situation is that “most of our banks, have less than one billion US in assets.

“It has been a very difficult proposition for us. However we have decided to raise the ante and to increase our advocacy because corresponding banking in essence is a public global good so I cannot be looked upon exclusively from the standpoint of risk and return because in essence if we were to do that then you would be literally de-bank certain regions and certain countries”.

Browne said the region would continue to bring greater awareness to the various stakeholders including regulators in the United States, Europe and Canada to some extent “so that they could understand it is not just about risk and return but it is really about a fundamental right.

In-coming CARICOM chairman and host Prime Minister, Allen Chastanet said he welcomed the idea of establishing a single Caribbean bank, adding “we have also come to the conclusion we now need to reduce that risk”.

He said a former governor of the Eastern Caribbean Central Bank (ECCB) had indicated a solution would be to have all of the indigenous banks in the region to form one bank.

He said whilst this may be a difficult proposition “what we have been talking about is to form one compliance authority … that’s the change.

“The world did not understand what compliance was before, it’s the fastest growing industry in the whole world in terms of compliance because as you ask one question it compels you to ask many more questions.

“In my humble opinion, what has happened is that we have become so intimidated by the loss of corresponding banking that our own compliance agencies have become excessive and in some times it is now reducing the size of the amount of money coming down in and out of our region.

“So by creating one compliance department that is properly manned and the indigenous banks would pay for those services on a use basis that may be a way to solve the problem … and I think Prime Minister Browne is 100 per cent right if in fact that is not moving fast enough”.

He said another way of looking at the problem of corresponding banking is to follow the Mexico model and work with the country “and use their banks to assist us”,

Browne said he believes the region should also consider getting together and purchase Scotiabank operations in the region.

“I thought that was an excellent opportunity for the OECS counties in particular to come together and purchase the branches,” he said noting that it would have required at least 98 million US dollars for the nine branches “with perhaps about three billion US dollars in assets

“I thought that was an excellent opportunity for the region which would have helped us to have one major bank that would have branches in the diaspora to provide banking services to Caribbean people in the diaspora,” Browne said.

Antigua and Barbuda and Guyana had initially expressed reservations about the proposed acquisition, with St. John’s indicating that it would not be issuing a vesting order to facilitate the move.

The RFHL statement said that the banks being acquired are located in Guyana, St. Maarten, Anguilla, Antigua and Barbuda, Dominica, Grenada, St. Kitts and Nevis, St. Lucia, and St. Vincent and the Grenadines.

It said that the purchase price is US$123 million, which represents US$25 million consideration for total shareholding of Scotiabank Anguilla Limited; and a premium of US$98 million over net asset value for operations in the remaining eight countries.

Antigua and Barbuda has said that it wants assurances that local banks will be given priority to purchase Scotiabank’s operations on the island and that local persons’ investments and savings will be protected.