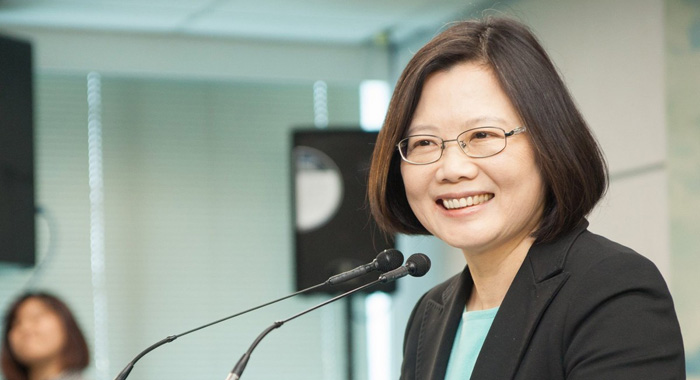 President of Taiwan, Tsai Ing-wen will arrive in St. Vincent and the Grenadines on Tuesday for a two-day official visit as part of her “Journey of Freedom, Democracy, Sustainability” tour of Taipei’s allies in the Caribbean.

The tour includes stops in Haiti, St. Kitts and Nevis, and Saint Lucia, the Caribbean nations that continue to recognise Taipei as independent of China, which claims it is a renegade province to be reunited with the Chinese mainland.

The Ministry of Foreign Affairs in Kingstown said Tsai’s tour of the region is aimed at further strengthening cooperation, exchanges and friendship between Taiwan and its four Caribbean allies.

Tsai’s delegation will include high-ranking government officials, such as Foreign Minister Jaushieh Joseph Wu and the Secretary-General of the National Security Council David Tai Lee, as well as legislators and business representatives.

The trip is her first to the region as head of state and seventh abroad since assuming office in May 2016.

On Tuesday, Tsai will hold talks with Prime Minister Ralph Gonsalves and meet with representatives of “Taiwan MOFA Alumni Association” and the 2019 Taiwan scholarship recipients.

While in the country, the Taiwan leader will attend a special sitting of Parliament at the House of Assembly and visit the Botanical Gardens for a tour and tree planting ceremony.

In honour of the president’s visit and the long-standing relationship between both countries, an achievement exhibition of the Taiwan Technical Cooperation Mission will be held at the National Public Library followed by a free cultural showcase by the Formosa Circus Art at the Victoria Park on Tuesday and Wednesday.

The showcase will commence at 6 p.m. on Tuesday and 5 p.m. on Wednesday and the public is invited to attend the free event.

The performers will showcase the various contemporary circus arts of Taiwan, mixing them with other styles of performance including traditional art forms, acrobatics, dance and drama, juggling, street culture, theatre arts to create a physical vocabulary that is unique in Taiwan.

One reply on “Taiwan president to visit SVG during ‘Journey of Freedom, Democracy, Sustainability’ tour”