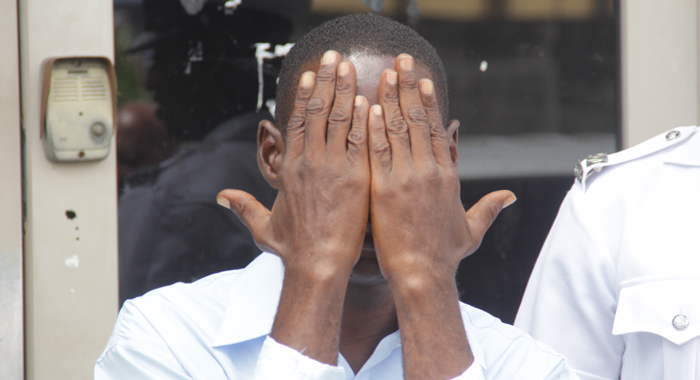 A 49-year-old Lodge Village security guard who said he stole EC$200 because he fell on hard times was ordered to repay the $40 that he used from the amount and was reprimanded and discharged.

At the Kingstown Magistrate’s Court on Monday, Senior Magistrate Rickie Burnett noted to the security guard, Lincoln Small, that he had put in jeopardy the job he held with Guardsman for the past three years.

At the time of his court appearance, the man had not told his employers that he had been arrested and charged.

Small pleaded guilty to a charge that on July 11, at Kingstown, he stole EC$200 in cash, the property of Digicel.

The court heard that Akeem Soleyn, an employee of The Cell, a Digicel store on Egmont Street, Kingstown, left the money wrapped in a white form on his desk and went to lunch around 1 p.m. last Thursday.

When Soleyn returned to work an hour later, he observed that the money and the paper were missing.

Soleyn and a co-worker viewed the CCTV footage, which showed Small removing the money from the desk.

The police were called in and Small admitted to taking the money and handed over EC$160 to them.

Small, who had no previous convictions, told the court that he has six children four of whom live with him.

The children’s mother, who is unemployed, does not live with them, and he is both their mother and father, Small told the court.

“That’s a good thing. It’s not often you hear that,” the senior magistrate commented.

Small said he has been under financial pressure since the children’s mother lost her job in September.

“Kids in school, security guard salary,” he told the court, adding that he normally credit groceries at a shop, resulting in a monthly bill of about EC$400.

He said that when he told the grocer that he wanted to discontinue the credit arrangement, the balance was $600.

“This is not normal behaviour,” Small said of his theft, adding, “They say pressure does buss pipe.”

The magistrate told Small that as a security guard he ought to know that CCTV cameras are widely used throughout St. Vincent and the Grenadines.

“I could be walking in the street and meet a friend and greet her in a particular way; that is recorded on camera,” Burnett said.

He told the man that he might lose his job when Guardsman finds out about his actions.

Digicel is one of the firms in SVG to which Guardsman provide security services.

Small told the court that he left the full EC$200 that he stole at home, in the place where he normally leaves money for use in maintaining the home.

He said that the children used EC$40 of it, but he was not sure what for.

“This is a hard one, definitely” the magistrate responded. “A man is employed, salary is not enough to take care of the home, he yields to temptation, is caught, enters a guilty plea, but may lose his job as well. That is going to make it worse for the family. I don’t think he is lying. He strikes me a s a genuine person.”

Small told the court that in stealing the money, he had done what he tells his children not to do.

Burnett told Small that he has to understand that the whole world is going to hear about him as journalists were in the courtroom.

“They media is here. They have their responsibility as well,” Burnett said.

Meanwhile, when given an opportunity to address the court, Soleyn said that before hearing Small’s explanation, he had narrowed down the man’s crime to greed or financial strain.

He made no comments on sentencing, leaving that entirely up to the court.

Small told the court that he did not have $40 there and then to compensate Digicel, but could borrow it before noon.

When ordered to compensate Digicel in the sum of EC$40, Small left the court and returned a few minutes later with the EC$40.

Burnett reprimanded and discharged the man, saying that he had suffered enough as a result of his actions.