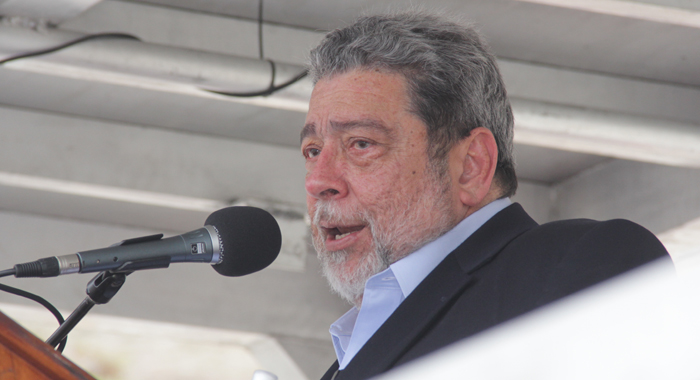 The firm whose letter of objection triggered a Caribbean Development Bank review and cancellation of financing of a government projectwon contracts under the same tendering process, Prime Minister Ralph Gonsalves noted on radio Sunday.

“Bally and Bally complains, but the same tendering process, which is supposed to be so polluted, they have done a tremendous amount of work already,” he said.

They are doing one right now in Bequia on the Bequia Community High School. They did one under the BNTF, a big one up at Cottage in Fancy with the road, linking Cottage with the main area of Fancy. They did work at German and English Gutter,” the prime minister said.

“So, the point is this, how is it, all of a sudden, the same Tenders Board, something is wrong or some undue influence. All the contracts, whether it is CDB project or a World Bank project or a European Union project, Taiwanese funded, government-funded, you  have somebody who is evaluating the bids, an independent entity which is evaluating the bids, you hear me? And who will also do the design of the project and who would supervise it,” Gonsalves further said.

After the contract for the CDB-funded “Yarabaqua River Defence” project was awarded to Reliable Construction Ltd., whose bid was $1,421,576, Bally and Bally Investment, an unsuccessful bidder, complained, saying that the winning firm did not meet the criteria.

In a Sept. 14, 2018 letter to the CDB, Bally and Bally had pointed out that among the criteria for the award of the contract are that the bidder must meet minimum experience requirements in the key activities of gabion wall construction, reinforced concrete construction, and river training.

In the letter, Cameron Balcombe, managing director of Bally and Bally Investments, said:

“I [am] confident, from my own knowledge and inquiries, that Reliable Construction Limited has not done any Gabion basket or river training works of that magnitude or at all in this State or elsewhere to even qualify under the assessment as substantially responsive.

“Therefore, there has either been a false declaration made in their forms or unlawful and unfair intervention by someone of influence on their behalf.”

Gonsalves, speaking on radio on Sunday, said that when the CDB conducted its review, they felt that Reliable Construction Ltd. should not have been granted the contract “on the basis, I have been advised that they did not have the experience and so on to do it, but that’s not a view which is shared by other people”.

He noted that Reliable Construction had not commented on the development.

“If Reliable feel that they won the contract fair and square, never mind what the review says, what their lawyer may say? You see the multiple implications? And I was waiting for somebody to identify that the higher up person who was supposed to have used undue influence was Ralph. Eh? So that they would help me in my retirement years,” he said, alluding to a lawsuit.