The prime minister said Renewal @40 “is designed to make our country better, to make optimal the outcomes from our strengths and possibilities”. 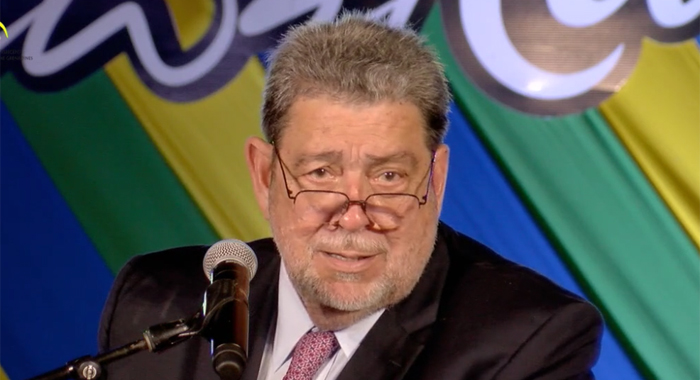 While St. Vincent and the Grenadines has made significant progress since attaining independence 40 years ago, there remain on-going problems and challenges that demand further corrective action.

Among these, Prime Minister Ralph Gonsalves, on Saturday, mentioned “continued high unemployment and pockets of intractable indigence”, though, he said, both poverty and indigence have declined.

Speaking at the launch of “Renewal @40”, a series of activities and events to celebrate the nation’s 40th anniversary of independence, Gonsalves further said, “… there are areas of our city which are in decay and in search for a renewal”.

He spoke of the problem of a lack of sufficient competitiveness in economic enterprises, a comparatively suboptimal level of labour and management productivity”.

Gonsalves, who is also Minister of National Security, said there is “less-than-optimal citizen security as a consequence of some serious crimes, including against women; a continuing debilitating patriarchy in the distribution of power in the society and a coarsening of public discourse, including on social media; too high levels of political divisiveness in our land, and a host of contemporary challenges to good governance arising from institutional weaknesses, and troubling and maligned external influences, pressures or bullying and the existential threat of climate change.

“Solutions are available for all these problems, challenges and more, correctives on these are a work in progress; indeed on all of them, progressive advances have been made but in our Renewal @40 we have to acknowledge that much more is still to be done as we set about doing them.”

The prime minister said Renewal @40 “is designed to make our country better, to make optimal the outcomes from our strengths and possibilities”.

He told the launch at the Villa Campus of the Community College that the events are also intended “to reduce the effect of our limitations and weaknesses, and, indeed,  cause those limitations and weaknesses to metamorphose or be transformed into strengths and possibilities and in that process, we have to come home to our history, which means coming home to ourselves”.

He said the programme will run from Saturday’s launch until Oct. 26, 2020, the eve of the nation’s 41st anniversary of independence.

The 15 months will encompass multiple activities across various sectors and interests led by the state apparatuses, but involving civil societies and local communities, both in respect of initiatives taken and implementation pursued, the prime minister said.

“Renewal @40 is about life, living and production in all their dimensions. It is a national enterprise engaging Vincentians at home and abroad and linking with our friends and allies of all nationalities in our regional and global family of humanity.”

The prime minister said that during the last 40 years, the country has made immense social progress, collectively and individually.

“This progress had been particularly evident in the areas of health and education, housing, roads, bridges, sea and river defences, airports and seaports, garbage collection and disposal, water, electricity, telephony, energy diversification, information communications, technology, mass media, sporting and cultural facilities, air and sea transport, social security, community facilities, police and coast guard  facilities and other assorted infrastructural and physical facilities of the state, the private sector, the cooperative sectors, individuals all across the country.”

He said significant economic growth has occurred over the past 40 years,

“Salaries, wages, incomes, and the per capita gross domestic products have risen, all of them, markedly. Economic diversification has taken place to such a profound extent that a hitherto goods-based economy has been transformed before our very eyes into an overwhelmingly service-based one.”

The prime minister said the spread of businesses owned by Vincentians has developed by leaps and bounds amidst an expansion of regional and foreign investment.

“A snapshot of progress shows the iconic presence today of many, many institutions and facilities which were not in existence in 1979,” Gonsalves said.

Among these, he mentioned the Argyle International Airport, the Canouan Jet Airport, the National Insurance Services, several new post-secondary, secondary, primary, early-childhood, adult and special education facilities, including the community college at which the launch was taking place.

He mentioned the expansion of the Milton Cato Memorial Hospital, the Modern Medical Diagnostic Complex at Georgetown, the three polyclinics and the modern, mental health centre.

The prime minister also spoke of the “numerous” modern police stations, the National Library and the learning resource centres.

He mentioned the Kingstown Vegetable Market and Little Tokyo, the Cruise Ship Pier and the Campden Park Container Port, the modern Arnos Vale Sporting Complex and many rural playing fields, the Bank of St. Vincent and the Grenadines (the NCB was started in 1977), the Rabacca Bridge, and the UWI Open Campus, which is expanding with a US$6 million loan from the Caribbean Development guaranteed by the government of SVG.

The National Lottery, which will, this year, realise revenues in excess of EC$65 million, geothermal energy exploration and social energy, the Canouan development project, Cable & Wireless West Indies Ltd., the 43-metre off shore patrol vessel, the Capt. Hugh Mulzac, the number of low-income housing projects and the huge expansion of quality, privately-owned homes, also made the prime minister’s list.

“Now, none of these things, and more were in existence at independence in 1979,” Gonsalves said.

3 replies on “PM identifies problems, advances as since SVG’s Independence”