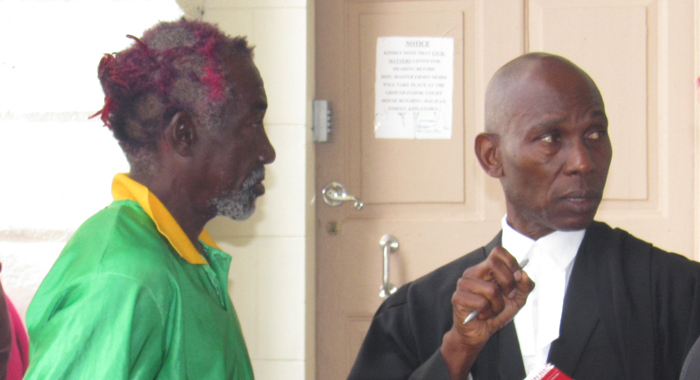 Peter Weekes, left, and his attorney, Jomo Thomas outside the High Court after last Friday’s sentencing.

A 60-year-old Questelles farmer has been ordered to pay a fellow villager, whom he chopped near his farm, EC$5,000 by October or go to jail for four and a half years.

Justice Brian Cottle handed down the sentence on Peter Weekes at the High Court, in Kingstown, on Friday.

Weekes was originally indicted on the attempted murder of Godfred Anthony, but pleaded guilty to the lesser charge of wounding with intent, after his lawyer, Jomo Thomas, negotiated a plea deal with prosecutors.

“Why you chopped me?” Anthony asked Weekes, who replied, “You chased after me the night before.”

The chopping incident occurred on the street close to Weekes’ farm.

Anthony was hospitalised for several days ask a result of his injuries.

In mitigation, Thomas told the court that Weekes must be credited as, at age 55, it was the first time he had “troubled the law”.

He said that the incident was out of character for Weekes.

The character witnesses described Weekes as “respectful”, “a hard worker”, someone who “never got in any confrontation with anyone” and “outstanding in the community”.

Thomas also told the court that Weekes had visited the Questelles Police Station on numerous occasions complaining about praedial larceny.

The lawyer further said his client has shown extreme remorse and was willing to pay some compensation to Anthony.

The lawyer also informed the court that Anthony has expressed an interest in compensation.

2 replies on “Farmer, 60, must pay chop victim to avoid jail”