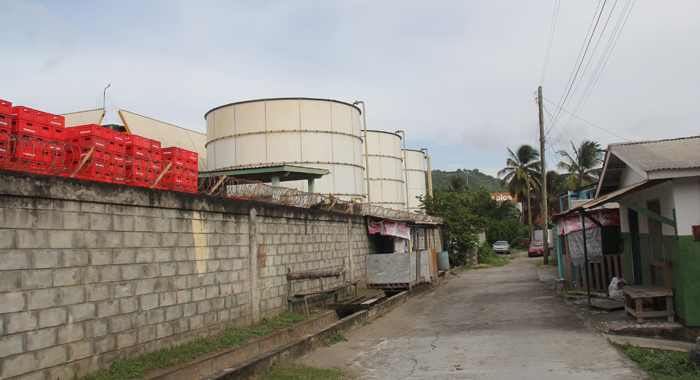 This photo illustrates the proximity of the brewery and the offensive tanks to Roucha Bay. (iWN file photo)

Residents of Roucher Bay, a community separated from the St. Vincent Brewery Ltd., by a perimeter fence and concrete road, are complaining about the sickening stench coming from the bottling plant.

“It’s not a matter of closing it down because everybody has to live, has a family, but I am sure there is a way they can treat the system,” a resident of the South Leeward village told iWitness News on Wednesday.

He was sitting in his patio with a woman, both with kerchiefs over their faces, in an effort to inhale less of the noxious scent.

The couple told iWitness News that they have been living in the community for about 20 years, and the problem started since the brewery built some tanks close to their perimeter fence a few years ago.

They did not give their names, but the man said that at times, foam comes from the tanks, and the froth, which is easily blown by the wind, would irritate the skin if it makes contact.

The couple said they have complained repeatedly to the health authorities and did so last Wednesday, the very day when they spoke to iWitness News.

“I tell them today, ‘You know when alyo would do something? Is when body bags, start coming round Roucher Bay,’” the woman said, adding that the issue had intensified since the Wednesday after Vincy Mas.

She said the health authorities told her that three other people had already called to complain that day.

“The scent never stops so even when you want to sleep you have to close down the whole house, even if it’s hot. From the time you open the window, that’s it. You can’t sleep. It wakes you up,” the woman told iWitness News.

The man said that there are times when the stench arises and then the company would do something to eliminate it, but that is not always the case.

“You can’t even sleep in your house at nights,” the man said, adding that he spends most of his time in Mustique but when he returns to St. Vincent, he can hardly spend time at his house.

Another female resident of the community, who also declined to give her name, told iWitness News that she built her house in the community about a year ago but had been living elsewhere in the village for years.

She said she has had the experience with the odour since she moved to the village in 2008 and had initially thought the scent was coming from a gutter.

She said that around this time last year, when her house was being constructed, the scent was extremely bad.

“But now, I think it is beyond. It’s unbearable. You notice I have most of the windows locked. When it kind of dies down, then you open them. But after the carnival season, it gets worse, unbearable,” she said.

“We have to lock up,” the woman told iWitness News.

“Most of the villagers are complaining that it is really now unbearable. To me, it seems like it is a disgrace living in this area behind here,” she said, adding that besides the scent, it is a lovely area in which to live.

“In terms of the landscape, we have our beach there, and everything. The park is out there. Everything is so cool; just the brewery,” the woman said.

One man told iWitness News he has been living in Roucher Bay since 1983 — before the brewery was built.

He, too, said that the issue with the stench started since the company built the tanks a few years ago.

“When that starts to froth up, it blows all the things on my house,” said the man, who also declined to give his name.

The man’s one-story concrete home, which was remodelled a few years ago, had to be repainted three times over the past few years because of the froth, he told iWitness News.

He said that the brewery bought the paint for him on one occasion.

The villager told iWitness News that sometimes he has to leave his house and spend the entire day elsewhere and return at night, when he has to close the entire house.

He said he had raised the issue on radio several times.

Meanwhile, another villager, Cedric Young, aka “Sand Ah Rush”, told iWitness News that he has been living in the village since 1994, but had been doing business there before then.

Young, who operated a disco, which was also called “Sand Ah Rush”, told iWitness News that at times the area smells “a hog pen”.

He said that some of his patrons had thought that the scent was coming from his septic tanks.

“When the wind is blowing, all the froth blowing out the tanks, coming on your building, nastying up the place. And you have to paint back you own place,” he complained.

He said that because of the scent, people stop visiting his disco and bar, and he was forced to close his business, and has been unable to sell the furniture, pool board and other items.

Young told iWitness News that Member of Parliament for South Leeward, Nigel “Nature” Stephenson has spoken to the company about the issue, but it seems that nothing is being done.

He also complained about waste water from the company’s manufacturing activities running into the sea.

“And that is bad,” Young said.

“Children going down there, the water is hot and that is bad,” Young further stated, adding that the colours of the waste water is brown or green, apparently depending on what the brewery is brewing.

“Sometime I have to lock up and do down by the bay and sit down,” he said, adding that he has to keep fans running to get rid of the scent.

Young said he would have preferred it if the brewery had offered to pay him for his property so that he can relocate.

He said some friends visited him from Trinidad last year and he was so embarrassed because of the smell.

On Monday, iWitness News made multiple telephone calls to the brewery in an attempt to get a comment on the situation.

The woman on the other end of the line returned saying that the person’s name is “Jose” and the person is based in Barbados.

At the time of publication of this article, the company was yet to respond to our request for a return call.