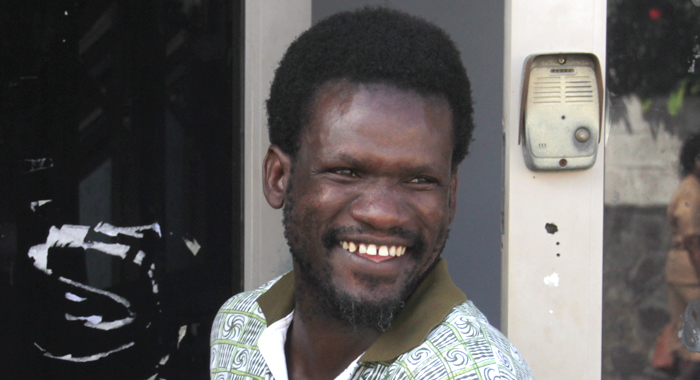 Daniel Laidlow smile as he leaves the Kingstown Magistrate’s Court last Wednesday after paying compensation for punching the mother of his child in the eye two days earlier. (iWN photo)

The woman whose ex-lover punched her during an altercation at his house, to which she had agreed to go although another woman was there, has portrayed him as a serial abuser.

Alisha Charles told the Kingstown Magistrate’s Court on Wednesday that while she did throw a puzzle book at Daniel Laidlow Monday night, it was all part of the fun in which they were all involved that day.

“I was not jealous, because I already knew,” she told the court.

Senior Magistrate Rickie Burnett had, on Tuesday, ordered Charles and Laidlow to appear before him on Wednesday.

The court appearance was so that Charles could collect EC$750 that the magistrate had ordered Laidlow to pay her in compensation for punching her in the right eye Monday night.

On Wednesday, Charles, who did not attend Tuesday’s proceedings, refuted the account Laidlow had given the court one day earlier, when he pleaded guilty to assaulting her.

Laidlow had told the court that Charles, the mother of a 10-month-old child resulting from their on-and-off relationship, had gotten jealous after he locked himself in a bedroom with the other woman, whose name was not revealed.

He said Charles had known that the other woman was at the house when she agreed to visit.

Laidlow said that when he refused to open the door to the bedroom which he and the other woman were occupying, Charles scaled the partition and tossed a book at him.

He responded by punching her in the eye.

But Charles told the court that Laidlow’s account was not entirely true.

She said they were joking around all day at Laidlow’s home and that she had stood on a table and tossed a small puzzle book into the bedroom.

Charles told the court that Laidlow had laughed.

He later began to cuff her, she told the court.

She said that after the violence, she started packing her things to leave and Laidlow begged her not to call the police.

“It’s not the first or second time he’s hitting me,” she told the court.

She said that on the previous occasion that Laidlow had struck her, his mother had begged him not to do it again, telling him he wouldn’t want anyone to treat his daughter that way.

Charles told the court that she doesn’t want Laidlow to be imprisoned but would like a restraining order.

Asked why she had agreed to go to Laidlow’s house, knowing he had another woman there, Charles said Laidlow had always invited her to come to his house, but she always took it as a joke.

She said that when she arrived and realised another woman was there, she got vexed but later laughed.

Charles said she also told the other woman that she was not vexed.

“I don’t understand why all of a sudden this, when we all like good,” Charles said of the violence she suffered that day.

Burnett told her he was glad that she had come to court to give her version of what had transpired.

Asked if she would accept the compensation, Charles said she did not want anything from Laidlow.

Charles told the court that Laidlow interferes with her even in the road.

She said that she has begun the process of filing for a restraining order, telling the court she has “a paper” in her bag.

She later said she would accept the compensation that the court had awarded.

Laidlow told the court that he did not want to say anything in relations to Charles’ comments to the court.