The man said that after his experience, he might have to be satisfied with just one woman. 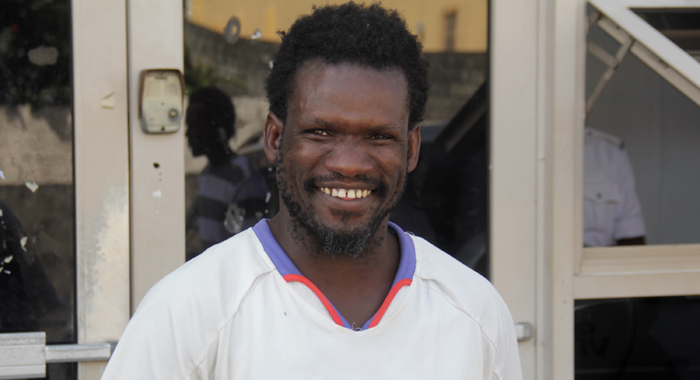 A Redemption Sharpes man says the two women “friends” he invited over last Friday, had no objection until he decided to spend Monday night with only one of them.

That decision resulted in Alisha Charles, with whom Daniel Laidlow has a 10-month-old child, apparently becoming jealous.

When Laidlow refused to open the bedroom in which he had locked himself with the other woman, whose name was not given in court, Charles climbed over the partition of the bedroom and tossed a book at him.

The enraged man responded by punching Charles in the face, sending her to hospital for a night.

At the Kingstown Magistrate’s Court on Tuesday, Laidlow pleaded guilty to a charge that on Monday, July 15, at Redemption Sharpes, he assaulted Charles, causing actual bodily harm.

He told the court he is a carpenter, who has been employed with BRAGSA, a state agency, for 10 years.

The father of two children, 8 years old and 10 months old, made it a point that the children have different mothers.

He, however, denied that unlike what the prosecution stated in the facts presented to the court, he was not the one who initiated the communication that led to Charles coming to his house last Friday.

Laidlow told the court that Charles sent him a text message on Friday saying that she was coming by.

He said their relationship ended years ago and their 10-month-old child is the result of an “on and off relationship”.

The man told the court he told Charles that another woman was at his house and she said that was not a problem.

Laidlow further said Charles told him that he and the woman could stay in one room and she and the child in another.

Senior Magistrate Rickie Burnett asked Laidlow if he agreed to that and he told the court yes, adding, “Is my place”.

He said that on Monday, he, Charles and the child were in a bedroom having fun while the other woman was in another room.

The man said that when he went into the other room with the other woman and locked the door, Charles started to argue, scaling the partition and tossing a book at him.

“Me ain’t dey with none ah them,” Laidlow told the court, adding that both women are his “friends”, saying that is the status of all the other women in his life.

Of Chambers, Laidlow said: “She does just carry on with some ways I does can’t put up with.”

Burnett commented that every time he come to court something new happens.

“This is a brand new one altogether,” Burnett said, adding, “Mr. Laidlow, what you did to her can’t be right.”

Laidlow said that after punching Charles he went to get her some ice, which she placed over her eye.

He said that everything seemed to be fine and Charles and the other woman “were there communicating”.

He, however, said that because he decided to stay in the room with the other lady, Charles started complaining.

Laidlow told the court he enjoyed the thrill of being in a house with two women but not the fact that he punched Charles.

Meanwhile, prosecutor Police Constable Corlene Samuel told the court that while some women younger than her might say differently, she would not tolerate such a relationship.

“I am a bit lost for words because this is new,” Samuel said, adding, “I will not accept this.”

She said that the only mitigating factors in the case were the early guilty plea and the fact that he has no previous convictions.

The prosecutor said that having the two women at the house at once would have invariably led to friction.

Meanwhile, counsel Ronald Marks, who was asked to weigh in on the issue, said that while the situation was unusual the elements of sentencing remain the same.

He said that Laidlow has shown genuine remorse for his actions but noted the level of provocation when Charles tossed the book at Laidlow.

“He shouldn’t try those strokes,” Marks said of Laidlow’s decision to have the two women at the house at once, as emotions would be involved.

When the magistrate asked him if he would invite two women to his house at once again, Laidlow said, “Ah might ha’ fuh settle for one now.”

Laidlow told the court that he has been working at BRAGSA for 10 years and would like to continue in his job to provide for his children.

He told the court he would like to compensate Charles and offered EC$700.

The magistrate ordered him to compensate Charles in the sum of EC$750 and bring the money to court by tomorrow, Wednesday.

Correction: An earlier version of this story misstated the complainant’s surname.