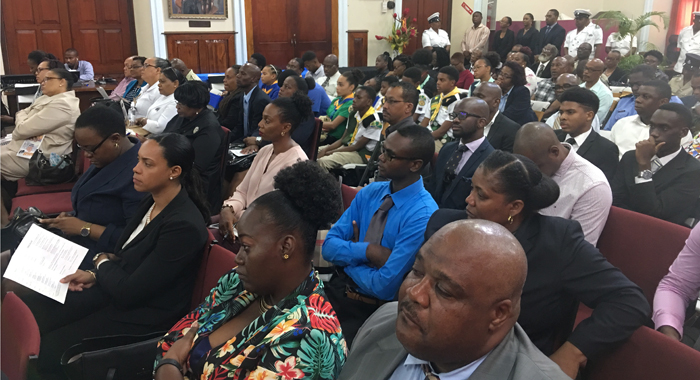 A section of the audience at the launch of the National Prosecution Service in Kingstown on Wednesday. (iWN photo)

The National Prosecution Service was launched in Kingstown on Wednesday under the theme “S.P.E.A.K. U.P. — It can be YOU!”, a rubric that emphasises the importance of witnesses to the criminal justice system.

“Today’s theme causes us to understand that witnesses are at the root of what we do at the office the DPP,” acting Director of Public Prosecution (DPP), Sejilla McDowall told the launch.

“Without witnesses, our entire criminal justice system would crumble,” she said, adding, “The power lies in the hands of citizens to speak out.”

She said that to help the public deal with this fear, her office has embarked on a witness empowerment initiative.

McDowall told the gathering, which included judges, magistrates, police officers, lawyers, and members of the public, including students, that her office has developed a student-focused “Anti-Crime Student Engagement Programme”.

ACEPT encourages persons to “Talk. Tell. Testify” so that the youth of St. Vincent and the Grenadines (SVG) “can understand that we can cut this crippling fear”.

She noted that witness empowerment initiatives in SVG include having witnesses testify remotely, via video link in some cases.

Chief Magistrate Rechanne Browne said “S.P.E.A.K. U.P.” was a fitting theme, the  intent of which is clear.

“It must be noted, however, that it takes courage to speak up and to stand for truth and not to cower in fear at our own shadow as a consequence of having come forward and spoken,” she said.

The chief magistrate said this highlights the united effort needed by all stakeholders, in combating crime and ensuring that when persons speak up it will also mean they will be safeguarded and protected “especially against all kinds of unscrupulous persons who would endeavour to keep their mouths closed”.

Eastern Caribbean Supreme Court judge, Justice Brian Cottle, a Vincentian assigned to the SVG circuit of the court, said the criminal justice system serves to demonstrate and defend the values that the people of SVG espouse.

He said it establishes the boundaries of what the nation considers to be acceptable conduct in the society.

“Without a proper functioning criminal justice system, we would be exposed to rule of the strong and subject to the whims of the wicked. There will be no protection of persons or property.

“Life would be, as Hobbes envisaged, solitary, poor, nasty, brutish and short,” the judge said.

He said it is important to remember that the vast majority of Vincentians are peaceful and law-abiding.

“There does exist a criminal element but we cannot allow that minority to control our social narrative. It should not be the citizenry which cowers in terror from the outlaw. The position must always be firmly reversed,” Justice Cottle told the gathering.

“Every day on the news and on the entertainment media, one can hear efforts being made to indoctrinate Vincentians to adopt the view that informers are to be abhorred. We’ve all heard the statements, ‘Informer ah fi dead’, ‘Snitches get stitches’.”

Justice Cottle said that if Vincentians allow themselves to buy into that mind frame, “we risk descending into the kind of society that we can see developing in some places not too far away.

“Our citizens must be encouraged, empowered and, indeed, rewarded for revealing criminal activity,” he said, adding that there must be that partnership between the public, the police and the prosecutors.

The chief justice commented on the “staggering levels of crime plaguing the region” and highlighted the role of law enforcement and the judiciary in tackling crime.

She said it is often the job of the police to gather sufficient evidence and from the best sources for matters to proceed through the courts.

“This makes the role of witnesses crucial to securing convictions of accused persons,” Justice Pereira said, adding that the evidence of witnesses is often the backbone of the prosecution’s case and without reliable witness evidence, rates of conviction would plummet.

“When witnesses with relevant evidence fail to come forward, it weakens the justice system, it erodes the foundation of a safe and orderly society, it impacts every member of society and civilisation,” the chief justice said, adding that she is aware of these failures.

Justice Pereira said persons who work in the justice system must always remember that witnesses, including victims, are willingly subjecting themselves to relive what may be traumatic life event and do so in situations where they are scrutinised, questioned and disbelieved.

She said that empowering witnesses encourages them to come forward, adding that she is pleased to note that as part of the office of the DPP’s transition to an NPS, it is anticipated that the development of a witness code will be one of the deliverables.

The chief justice said that the best way to encourage witnesses to come forward is to empower them.

“I therefore encourage the Director of Public Prosecution and the National Prosecution Service as well as juridical officers and other stakeholders to be mindful of how we treat witnesses and be aware of the unfamiliarity with the justice system of these persons so that we could ensure that they are comfortable, that they feel safe as they assist in the administration of justice,” Justice Pereira said.

And, Attorney General Jaundy Martin, speaking on behalf of Prime Minster Ralph Gonsalves, said victims of crime are often “ordinary human beings” who are alive to the realities of life and are concerned about their own welfare and that of their loved ones.

“Their views, feelings and approaches to the crimes committed on them, sometimes years ago, often changes to reluctance and even hostility towards appearing as witnesses,” he said.

Martin said there are pending cases in which principal witnesses have been “eliminated”.

“The office of the DPP, however, has already demonstrated and will continue to demonstrate to gangsters, hustlers and transgressors that there is no space in St. Vincent and the Grenadines for their criminal conduct. The state is fully behind the office of the DPP and commits its limited resources to ensure that it eliminates crime and criminal activity,” Martin said.

The attorney general said the evolution of the Office of the DPP to the NPS is a demonstration that the state is committed to providing a safe and easy environment in which to live, raise a family, socialise and do business.

“Let criminals be warned that if there was a former environment in which crime was lucrative, this is no more. The legislative framework, the prosecutorial will and the commitment of the state stand in your way,” Martin said.