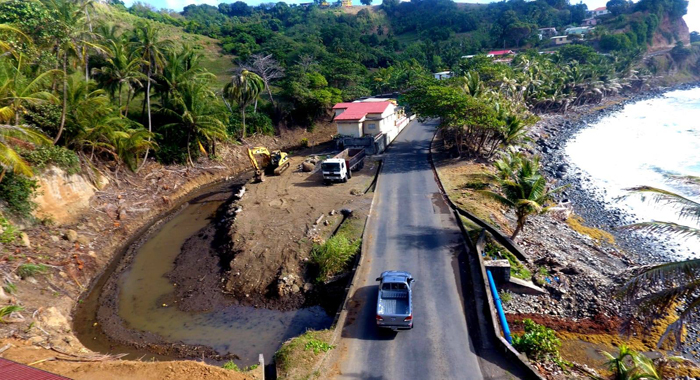 A photo from Reliable Construction’s Facebook page, posted on March 27, 2019.

Even if Reliable Construction Service Ltd. were to execute well the “Yarabaqua River Defence” project, this will not vindicate the government in its decision to keep the firm on the project after the Caribbean Development Bank (CDB) declare misprocurement and withdrew its financing.

“The process is very important because outcomes are dependent on process,” Leader of the Opposition, Godwin Friday told a press conference, in Kingstown, on Tuesday, in supporting that point.

He said that one may say that in this instance, things turned out well so the rules can be ignored at convenient times for the benefit of an intended person.

“What about all those persons who are involved in the bidding process? What about that instance when you have a situation where that factor that is overlooked becomes critical and then you have a catastrophic or, at least, some problem with the execution of the project?” the opposition leader said.

When the ministry refused to budge, Bally and Bally raised their concerns with the Barbados-based CDB, which conducted its own investigation and, six months after work began, concluded that the contract should not have been awarded to Reliable Construction and withdrew financing for the project.

However, Prime Minister Ralph Gonsalves said that his government will fund the contract and will keep Reliable Construction as the contractors.

How will it be assessed?

At his press conference, Friday said it isn’t just a matter of vindication because the project is done.

He said process is important because one does not have to reinvent the wheel but, rather, follow the standard processes that have proven to be beneficial over the long run.

“And it is important that we do that so that when there is a diversion, we pull it up that we don’t have situations where problems, serious problems emerge.”

The opposition leader said SVG has already suffered because the government has to come up with money to finance the project.

“And, sometimes you get lax and lazy, that’s on one end of the scale, or corrupt on the other end of the scale, and you do things that, eventually, when they are caught out, we pay the price. And we are paying the price because the contract is now being executed with money from the Consolidated Fund.

“Where is that going to come from? Hospital bandages? From fixing the potholes in Heritage Square? Where are these monies going to come from?” Friday said, adding that the government runs a deficit on every budget that it puts forward.

Friday said he has nothing against Reliable Construction, but said one cannot change the rules for some companies, noting that producing bids are costly and time consuming.

The opposition leader said he is all for encouraging contractors and local people to get into business.

“That is the fundamental principle of our New Democratic Party. We want to encourage that. But what they should do is get, as I said, the necessary partnerships, to get the experience and then you build up that way and you win contracts properly and you go forward and you get the experience,” he said, adding that this is how every contractor begins.

Regarding the government’s decision to keep Reliable Construction as the contractor even after the CDB declared misprocurement, Friday said Kingstown should meet the CDB’s standard.

“Of course, they should meet the standard because the CDB is not a flyweight organisation. If they set these conditions, it is because they think they are necessary for the proper performance of the work and we should have the same concern for the public purse as they do for their donor countries who contribute money to the bank,” Friday said.

He said that in giving the contract to Reliable Construction, the government is saying that the conditions have changed.

“And if the conditions are changed, why aren’t the other bidders given a chance to be in contention?” he told reporters.

“It seems to me that they would feel very aggrieved. And I am not making the case for them, necessarily, individually. I am more looking here for the public interest because I want to make sure that whoever gets the contract does it for the least cost and the best work. That is why these conditions are put in place,” Friday said.

The opposition leader, however, said that there is a question of suitability of the next contractor in line, saying that if the government find that there is no contractor who can do the work they would have to put the project out to tender again.

He noted that the CDB did not say that one contractor did not meet the condition and move to the next one.

“They said give us back our money; there is something seriously wrong here. We want nothing to do with it. They have their good name, their funders also to satisfy and they also have their rules and regulations and the fairness regulations for all the bidders who bid on their contracts to satisfy and to maintain that,” Friday said.