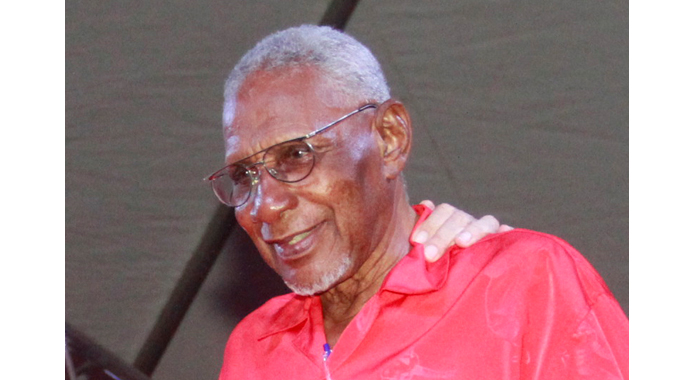 Sir Vincent Ian Beache, the former minister of national security who died on Monday at age 87 will be accorded a state funeral, Prime Minister Ralph Gonsalves has announced.

“Sir Vincent Ian Beache is one of the towering figures in our history and one of the most distinguished personalities from our country and the Caribbean who was born in the 20th century,” Gonsalves said on radio from Taiwan, where he is on an official visit.

He noted that Sir Vincent, a former opposition leader, also served as a minister of government under the St. Vincent Labour Party administration and later as minister of national security under his Unity Labour Party government, which came to office in March 2001.

“He has been one of the most successful political figures in our history. He is the best prime minister we never had,” Gonsalves said of his one-time political nemesis.

“He was my dear friend and comrade and will miss him greatly. I will have a lot more to say about this extraordinary personality who came from humble beginnings in South Rivers to arrive at a point, upon his retirement, [at which] there was general acclaim for him throughout the country and the region and elsewhere.

“The country will miss him; I will miss him; his party and his government will miss him; the people will miss him. Giants like these, when they pass, a void is left. His advice has always been very sound to me and we have worked on many struggles together, worked for the betterment of the people of St. Vincent and the Grenadines; very progressive, nationalist, anti-imperialist, advanced social democrat who looked out for the poor and the working people and the nation as a whole, a man who sought to unite people.”

Gonsalves quoted the Bible book of Micah in which the prophet asks what God requires.

“The government and people of St. Vincent and the Grenadines will provide a very dignified send off, as befitting our civilisation. He will be accorded a state funeral. He will be given all the requisite honours at his burial because of his outstanding service, including as leader of the opposition.