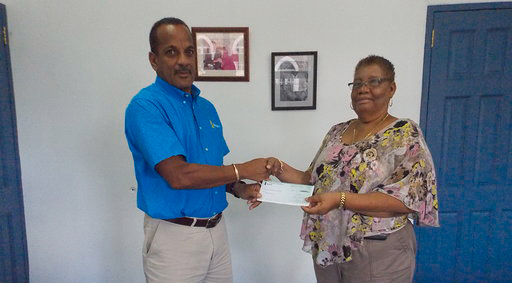 The owners of M.V. Gem Star, the ferry that was destroyed by fire in Kingstown on April 8, have reached a settlement with their insurers, The Beacon Insurance Company Ltd.

In April, a fire broke out in the lower levels of Gem Star, which was anchored at the Grenadines Wharf in Kingstown.

The burning boat was towed to the waters off the reclamation site on the following day, after persons, including members of the local fire service, fought unsuccessfully for hours to put out the blaze, which eventually burnt itself out.

This incident significantly impacted movement of people and cargo to and from the Southern Grenadines.

Three months later, the claim has been settled much to the satisfaction of the owners, Augustine Deroche and Anne Deroche, the insurance company said in a press statement.

Keith Boyea, owner of BMC Agencies in St. Vincent, the insurance company’s agent, said: “Claims of this size and complexity usually take much longer to settle but we were able to reach a satisfactory settlement within a reasonably short time frame.”

The statement said that the owners of the vessel were also “quite pleased with the manner in which the claim was handled, praising Beacon for their expediency in this regard”.

“We think settlement was reasonable and timely and as testimony to this fact, we will continue to utilize Beacon Insurance as our insurers of choice,” the statement quoted the owners as saying.

With the settlement cheque, the owners will now pursue their next steps in rebuilding the services that were once provided by the M. V. Gem Star, the statement said.

It added that the M.V. Gem Star II, which is already in service, “signals a vast improvement in services from a standpoint of Capacity, Speed and Comfort and we are delighted to share our new services with our valued customers”.