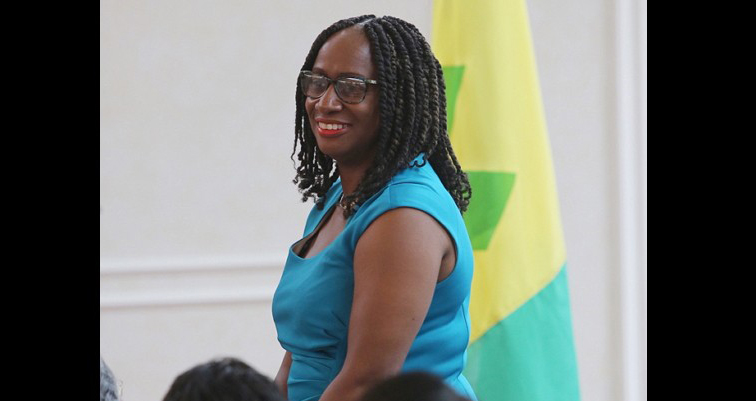 St. Vincent and the Grenadines’ ambassador to Taiwan, Andrea Bowman says that the opening of Kingstown’s embassy in Taipei represents rebirth.

She told the opening on Thursday — which was Chinese father’s day and Prime Minister Ralph Gonsalves’ birthday — that “there is no forced significance in his saying that the nation of St. Vincent and the Grenadines is born anew in Taiwan”.

“Our nation is born anew in the sense that after 38 years of a friendship which has withstood and stood the test of time, St. Vincent and the Grenadines is today placing its shingle, which is represented by this plaque and this embassy, where its heart and its commitment lie,” said Bowman, a retired career educator who is on her first diplomatic assignment.

“Our nation is housing a home, a new home, in a space where it feels a sense of belonging. Home is not only where the heart is, but it is a place which knows you, a space which you know,” she said.

The ambassador said that the establishment of the embassy is a tangible indication of the commitment and the trust shared by both nations.

“We have trusted each other in the most significant ways, which enhance and deepen our humanity,” she said, adding that in the words of Vincentian entertainer, Skinny Fabulous, the two nations have become “famalay”.

Bowman said hundreds of Vincentians students have found a home in Taiwan and have gained a second language.

“A nation’s culture rides on its language and as our students become more and more adept at Mandarin Chinese, they become more acculturated to their home away from home.

“Hence, the imprimatur represented by this plaque and this embassy gives our students and all Vincentians living in the Republic of China (Taiwan) a visible and concrete representation of a process that has already taken place emotionally and spiritually. “

She said the new embassy is indicative of future thrust.

“One does not establish a home if one intends to move out the following year. A new home in Taiwan symbolises a confidence in our shared forward path. It assures Vincentians and Taiwanese that our mission is firmly rooted. The citizenry of both our countries must recognise that we strengthen each other’s interests when we demonstrate good faith in respect for the journey which has brought us thus far.”

The embassy was established just over one year before general elections are expected in SVG, ahead of the March 2021 constitutional deadline.

The main opposition New Democratic Party has said that if voted into office, it will end Kingstown-Taipei ties and establish diplomatic links with China.

The state-owned Central News Agency (CNA) in Taipei said that SVG was establishing the embassy at a time when Beijing is stepping up its suppression of Taiwan’s participation in international events.

Beijing considers the self-governed Taiwan and its 23 million people as a renegade province to be reunited with China, by force, if necessary.

Since Tsai Ing-wen and her pro-democracy party came to office in Taiwan in 2016, five of Taiwan’s diplomatic allies have severed diplomatic ties with Taipei and switched to Beijing, leaving Taiwan with just 17 formal allies.

The CNA said that the new leadership of the Solomon Islands, one of Taiwan’s six Pacific allies, is reportedly re-evaluating the relationship.

Before coming to office in March 2001, Gonsalves had spoken against Kingstown-Taipei ties, but has maintained them over the past 18 years and says his government is committed to the relationship.

Bowman said that the embassy represents the commitment of SVG and Taiwan to “the principles of democracy which holds individual rights and responsibilities at its genesis.

“So let us get on with the business of having our democratic constructs work to deepen and widen familial bonds which we have established in the face of geopolitical challenges.

“I am honoured and humbled to have been given the responsibility of heading this embassy. I come to this post with a keen sense of the possibilities that lie ahead of us.  And as I said to President Tsai when she visited St. Vincent and the Grenadines last month, I would like to be kept busy,” she said.