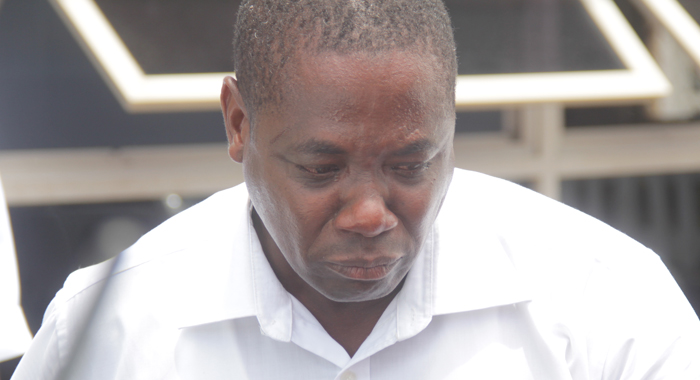 Security guard Kensley Bascombe cries as he is escorted to prison on Tuesday. (iWN photo)

A 45-year-old security guard wept on Tuesday after being jailed for six months for stealing EC$850 from a desk at VINLEC, where he was assigned.

Kensley Bascombe, of Lauders, cried when Senior Magistrate Rickie Burnett handed down the sentence at the Kingstown Magistrate’s Court.

The facts of the case suggested that Bascombe, notwithstanding his five years of experience as a security guard, did not know that covering the monitor on which the footage from a security camera is displayed does not block out the images that the camera records.

He gave an elaborate story — including having been “robbed and gunned down” a few years ago — in his effort to get the court to move away from the prison term that the magistrate had said was likely to be the sentence.

Bascombe said the police were waiting for him when he arrived at work on Monday and took him into custody, but he had pretended that he did not know what they were talking about.

“Not until when I see myself on the screen, there is no how I could debate and say is not me,” the man said, adding that he accepts that he was wrong.

“I see myself as being dishonest in that regard. And at the present right now, I am willing, willing enough to pay every cent back to the owner of this money. Now I am caught in this position here where I can be put behind prison for just simple $850,” Bascombe said.

The magistrate, however, told him it is not as simple as that.

“Don’t think it is simple. It is not,” Burnett said, and reminded the defendant that he had attempted to block out the camera, adding that this was extremely aggravating.

“So while you were committing the offence, you were trying to get away, as it were,” Burnett said.

On Tuesday, Bascombe pleaded to a charge that between July 31 and Aug. 5, 2019, at Paul’s Avenue, he stole EC$850 in cash, the property of Sheon John of Belvedere.

Bascombe, an employee of Humble Security, was assigned to the corporate headquarters of VINLEC at Paul’s avenue.

John is employed at VINLEC as an administrative assistant.

On July 31, about 10 a.m., she put EC$850 in cash in a white envelope and, intending to save the money to buy personal items, left the money in a drawer in the desk.

When she checked for the money about 11 a.m. on Aug. 8, John found that it was missing.

John inquired of her colleagues who said that they did not know about the money.

She then checked the company’s CCTV footage, which showed Bascombe, around 11 p.m. on Aug. 2 placing a t-shirt over the display monitor for the security cameras before removing the envelope containing the money.

John reported the matter to the police, who later arrested and charged Bascombe.

He gave a caution statement telling the court that the security officers have a key that they use to conduct checks inside the building.

Bascombe told police that the security officers usually go inside the building to take a nap when they get a break.

He said that he could not remember the date but one night he went inside the building to take a nap. However, instead of doing so, he went “straight up the step” and realised that the camera was on when he got to the main door that leads to the office.

He further said he chose to go to the area where he could not see the security booth from upstairs. There, he sat at a desk and tried to turn the computer on, but the light was too bright and he turned it off.

He further told police that he lay back in the chair and pulled the drawer and saw the envelope with the money.

He said he held the envelope in his hand, spun around in the chair then went back to his position.

Bascombe further said in his caution statement that when he got back to his position, he started “to think how they would look at it knowing that I am on duty”.

He, however, said he did not return the money and, when he got off duty, he used the money to pay bills.

Bascombe told the police that he had blocked out the camera so that no one could see when he took the money.

In mitigation, Bascombe, who did not have a lawyer, told the court that he had been employed with Humble Security for seven months, but has worked as a security guard at Canouan Resort and had been a Port security officer, employed by the Port Authority.

He said that altogether he has about five years’ experience as a security guard.

Burnett added:  “Based on the facts, you are facing jail this morning and you have to come good to change this mind.”

Bascombe told the court that he should start at the beginning.

He said that in 2017 he was “robbed and gunned down” in Collins.

“Hold on. But you are alive,” the magistrate said and explained to the man that the expression “gunned down” is used to mean someone was shot and killed.

Bascombe then clarified, saying that he meant that he was shot.

In September 2015, iWitness News reported about Bascombe being shot multiple times in Collins.

One of Bascombe’s relatives told iWitness News on Tuesday that he was shot on two occasions over the past few years.

Bascombe told the court that while he is lucky to be alive he has had to do a lot of medical check-ups, some of which “I can’t even pay for at the present.”

He said that when he interviewed for his job, he hid his medical condition because he did not want his employer to conclude that he that he was medically unfit.

The man said that at VINLEC, there was space for two guards, but his security firm “fit me in”, bringing to three, the number of guards there before transferring another.

He said he had been experiencing a lot of problems with his kidney but he hid it from his employer because he did not want them to think he was not fit.

Doctors ordered him to undergo some tests, but he could not afford to, Bascombe said.

The defendant further said he lives in a rented apartment and also has to pay for light, water, internet and take care of three children.

He said that a few days after getting paid, he would ask himself if he had really gotten paid.

At this point, the magistrate interjected, telling him that there are people who work for EC$5,000 a month and ask themselves the same question.

“When my hand place on this money, it is not mine, I haven’t worked for it but at the present (time), ah wasn’t thinking in that regard.”

He said he used the money to tie up all the ends he had and “the little” that remained, he spent it “piece, piece” until it finish.

The man said he also has a loan at Bank of St. Vincent that he is paying as well.

“I am brought here and I am guilty of the offence. My honour, I know it is not right in the sight of God and man, specially knowing I am a church-going person, it’s not right, but, at that time, when my hand place on that money, all I could have think [sic] of is to get the debt clear up.”

The magistrate told the man that as a church person he would also appreciate that there are consequences for actions.

Bascombe said that when he took the money, he was not thinking about the use that the owner had for it.

“I was thinking about my present situation…” he said.

Bascombe said he was willing to repay the amount he had stolen plus any fine the court imposed on him.

He, however, said he sees himself without a job.

The magistrate, however, told him that paying back the money would not be his sentence.

Bascombe said he sees himself without a job because the company will not keep him as a guard knowing he has been dishonest.

“And, besides that, I am on probation still.”

Burnett said: “Well, I want all the other security guards to hear about you. And they will know they can’t do that again or do that at all when they learn of your sentence.”

Bascombe again asked to be given a chance.

Burnett however, told the man that his sentence is likely to be a term of imprisonment.

“And if you know me well, I don’t change my mind. For the next six months when you are in prison, you will sit down and reflect on everything and change your life when you get out of prison,” the magistrate told the man.