Preacher assisted by churchgoers after being shot 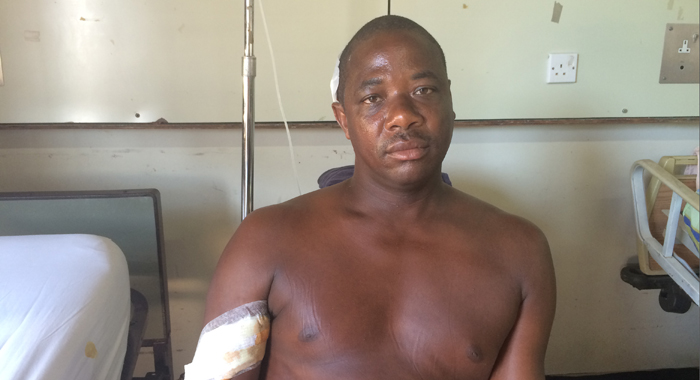 Kensley Bascombe, a preacher and farmers, is wondering if his attackers mistook him for someone else. (IWN photo)

A 42-year-old preacher of Collins says he is at a loss as to why he was shot multiple times in his community Monday night.

Unknown assailant(s) attacked the man, Kensley Bascombe, a father of five, as he made a trip to a shop in the village around 8:30 p.m.

“I went to the shop to buy some stuff and as soon as I by-pass the Stream of Power Church, I just heard one bullet fire off and by turning around, I received the balance towards my body,” Bascombe told I-Witness News on Tuesday.

He said that after being struck, he lay on the ground and his attacker(s) shot him two more times, then fired off another shot, seemingly in the air, before leaving.

Bascombe was shot in the back and shoulder and a bullet grazed his head, he told I-Witness News.

The man who is originally from Carrierre, but lives in Collins, where he farms, was assisted by persons at the church who were having a prayer session.

They took him to the health centre in the community and he was later transported to Milton Cato Memorial Hospital for further treatment.

Bascombe is trying to make sense of the attack, wondering if it was a case of mistaken identity.

“I just don’t know how to term this because I personally don’t trouble people and I don’t like violence and this sort of thing is not something I would like to support as a person who believes so strongly in God, [who] preaches several places,” Bascombe, a member of Christian Pilgrim Faith, told I-Witness News.

“I ask myself the question if they took me for somebody else or what. Or they just want to do me this. But who did it, I can’t say,” the former security guard told I-Witness News.

One reply on “Preacher assisted by churchgoers after being shot”